While I was helping my technician to install a keyphone system, there was a big basket nearby. It was used to store his children's toys which were mainly guns and swords. But there, I came across some very nice ones which I could not resist in taking the pictures. Later on, I found them on the Internet and are known as Nerf guns. Unfortunately, searching for them in Malaysian's Toys R Us was futile. But there were some on eBay which, I am sure, would cost me a lot on shipping and taxes. Damn. 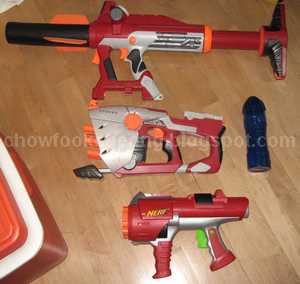 They looked so nice, especially the one in the middle where
the grip was so "reassuring". Ha ha ha ha
The blue thingy is not a missile but shaped like so.
It is to store water for a large watergun. 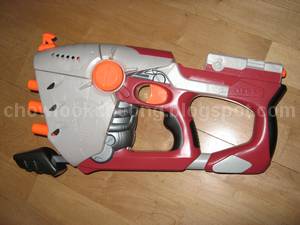 With some midifications, this would not look out of place
in a Sci-Fi movie or show 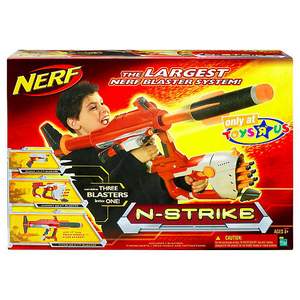 Later on, from the Internet, I found out these are called Nerf
guns and the one above, is from the N-Strike series. Its a Unity
system which you can combine other weapons with it. Wow 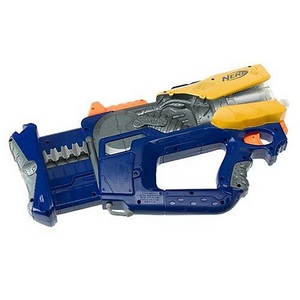 And this one is called the Firefly which shoots glow in the
dark foam darts from its rotating barrel. What it does is
flash the darts before each shot. But the gun itself is a
beautiful design though. Some small modification and
a but of paint would make it look as if it came from
Matsamune Shirow 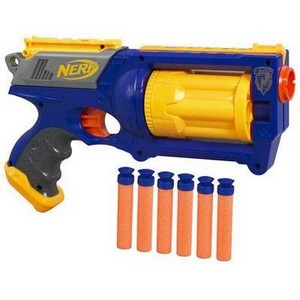 This is called the Maverick, which, again, is nice too
The barrel flips out (on the other side) for you to
load the bullets