Ha ha ha ha ha! Yeas, its one of those nights I got bored. I have a lot of those rubber foam tapes (which I used for the grips to my DIY Lightsaber) so I decided to stick some of them to my iPaq Aluminium Casing. You see, at the back of the casing is a small little raised area where you screw in a thumbscrew which allows you to clip it to a holder which clips to your belt.

I removed that because I tend to bend the thumbscrew/holder when I bend down a lot. So, once I removed it, I have another problem; when I lay the iPaq flat, the dimple acts like a little pivot which makes writing impossible. Coupled with a very reflective screen, the whole thing is very annoying.

So, I stuck some of that tape there and it solved my problems. Also, my iPaq does not slip too much and fall to the floor anymore. Ha ha ha ha ha! 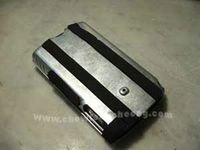 Here's the foam tape, but the double-sided tape is not very strong.
You can see some of the tape has started to warp when I put it in my waist pouch 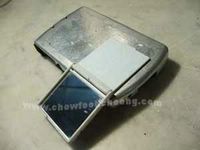 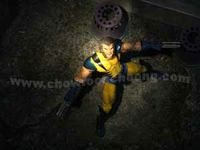 OK, so I decided to take some shots of Wolverine.
Its as if he was on rampage and got caught by a searchlight.

I am not sure what's with Honda nowadays. Everyone I know is trying to get one. Maybe its the looks but then again, maybe its just the name.I just bumped into a friend of mine and he got a Honda Accord. Then when I came home, a relative came and showed us their brand new shiny Honda Accord. Never being a fan of Honda (except their 1997 Prelude), I just took some pictures to show I was interested in the car. No, I am not jealous but there is something in Honda that I hate but I can't pinpoint it.

Maybe its because of the Kah Motors Dealership with a lot of stuck up salespeople. Maybe its because someone (I read) equate it with Sony; nice looking products but they never last. I even argued (nicely) with an Uncle of mine to get a Toyota Vios instead of the butt-ugly Honda City. Honda won because of the funky gear feature thing.

Then again, its their choice, their money. 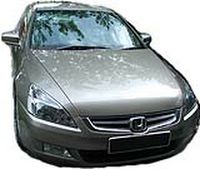 Anyway, here it is. Ho-hum