Just got the board back today. This was the fastest job they have ever done. But because of my design, a lot of tracks were still un-etched. Which, I suspect that they used tracing paper instead of positive film. In order to do a positive film you have to take the image in negative and then turn it into a positive image. A process which takes a lot of time and costs more money. On the other hand, using a tracing paper is fast and cheap.

There is also a reason why they did not use FR4 boards (fibreglass). In fact, there are several reasons:

1. FR4 boards are very hard to cut to size.
2. You need expensive 0.8mm tungsten drill bits as FR4 boards can blunt a normal drill bit after drilling one and a half hole.
3. Tungsten drill bits needs hi-speed drills.
4. They are also fragile and if you are not careful when it snaps (usually unexpectedly), it becomes a flying splinter. 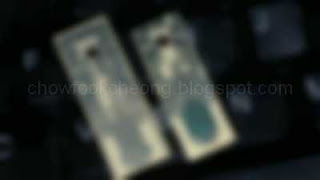 Unfortunately, out of the two boards, only one came out well. The other had many underdeveloped and broken tracks. But the one that is 'OK' needs worktoo as some of its tracks are also underdeveloped. I could get them done professionally but it costsRM54.00 each. For 1 inch x 0.5 inch, I don't think so. 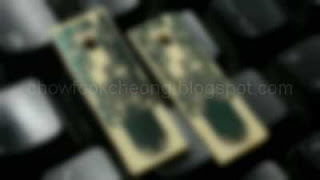 Compared with the earlier revision, both of them are of the same size. What I did was to redesign the board to accept the bigger SOIC chip. I don't like it either but
I've had it with the SSOP chips and the stupid adaptor.

1. The reissue is now molded in green plastic
2. The bottom hull has been redesigned to accept a landing bay complete with white metal landing gears. (going to be one heavy 'bird')
3. It also has a ramp, like the one you see in Star Trek III or IV
4. You can now position the wings for landing mode apart from normal cruising and attack modes. However, once you glue it into place, its permanent, just like the older version.
5. For some unknown reasons, there are 'words' printed on the upper hull.

Oh, and its in 1/350 scale which, will be a very popular choice because now you have a matching advesary model for your 1/350 scale Enterprise from Polar Lights!
However, in my current situation, with that Bird of Prey in my hands, I know that this is as good as it gets. Since I do not have the reissue model, I cannot compare it. Then again, I am not going to as this post is to explain why I got it. But you can go to Bruce's Domain for the comparison. His site has more pictures of the new reissue model and if you are really into details, reference pictures of the Studio Model as well.

I did a Bird of Prey model before, when I was in UK. Then I did another one, or rather, was halfway through it (I was in the drilling-holes-for-lighting-up-the-windows-stage). The next thing I know was, I got married and the model became part of the casualty in the termite attack. Sadly, most of the vital pieces were gone when I revisited the model which was covered in termite gunk.
This model came out during the 'acrylic stand' series where you stuff your model onto a clear piece of acrylic to give it a false illusion of flying. At that time, the idea sound good. When it comes to 'free' items, model kit manufacturers usually give you the standard 'paint & brush' package. But AMT took a step further by giving you some better packages such as 'sound & lights', fibre-optics pack with a motorized drill, unique posters and even yes, acrylic stands. Of course, with each new 'introduction' you'd want to buy more of the same model. Heh. 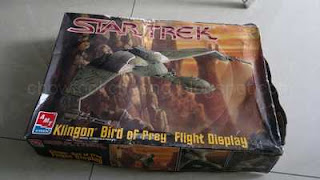 The box was quite beaten up and it looked as if
someone really did a number on it. Let's just hope
everything inside is intact... 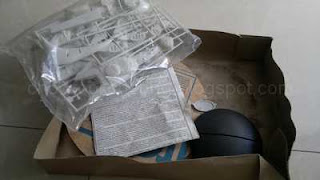 Upon opening, I am quite happy that the main package
is intact. Everything is there but looking at the dark
area of the box, it think it suffered water damage. 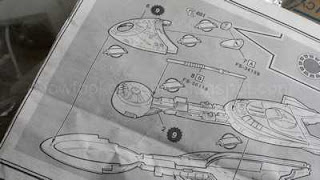 OK, this is the part I am interested in right now,
which is the 'head' or command centre of the
Klingon Bird of Prey. 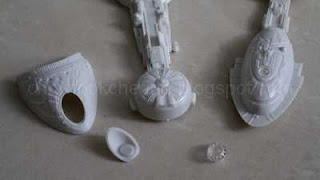 And just to make that happen, you need remove the
5 pieces from the plastic sprues. 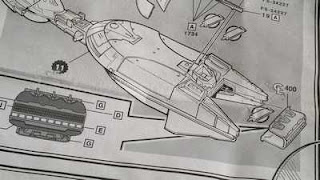 Here is another part which I am interested in.
But I am not going to say much about it as the
idea is still in its infancy. But there is a clue
for you: Red and Green. 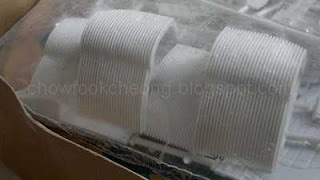 Here is another area that I am going to look
into once the first phase is done. However, it
will be a very expensive venture and some
one has already done it.

For those who knows me, you are correct in guessing what my plans are for this model. For those who do not, sorry. I'll let you know at a later date.
Date: Tuesday, March 20, 2012 No comments: Links to this post

My Friend is back