Next to the wall is one of the entrance to the classroom blocks. This is where the Standards Four to Six are housed in the afternoon. In the mornings, I guess it would only be for Standards Two to Three. So, for most of the six years, I was in this block. It was fun at first because I was in the morning session but got towards boring and a sense of dread once I get to the afternoon session. Still, 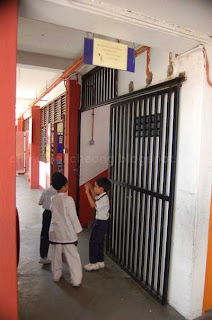 This is the much narrower staircase.
It will lead you to the blocks and also
towards the upper seats of the School
Hall too. 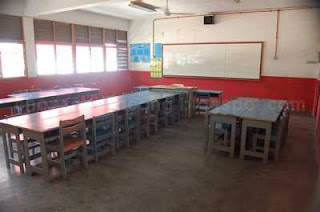 On the first floor would be my Standard Four class. Again, nothing
much has changed here except for the new electrical wirings, the
whiteboard and also the LCD projectors, to keep up with the times.
But notice the big windows on the left? It used to be the big 4x4 feet
glass windows! Yes, you could climb out of it and onto the ledge. 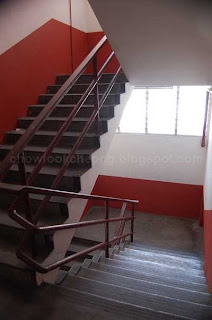 This is how the narrow stairs looked like
and everything is still intact, even the railings 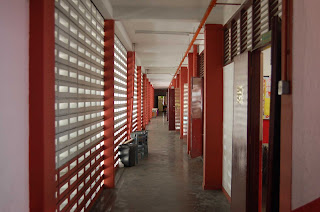 This is the corridor view you would see from the stairs. At the
end, on every floor, would be the toilets. So, imagine walking to
the toilet, passing through each class where everyone looks at
you. Funny thing is, with the doors of each class opened both in
the front and at the back, no one actually ever thought about
sneaking in and out of the class except when the period bell rings.
Even the naughty ones. Well, actually you can't because the boys
or teachers from the previous/next class would have seen you
and you'd be caught red-handed. 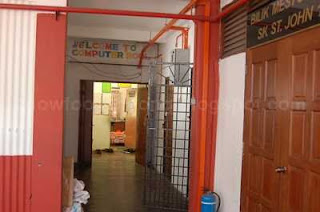 Unfortunately, by the time I reached the end of the corridor, it has
changed. The toilet has been relocated further to the front (door
hidden by the red wall on the right) and where the wall ends, there
is now a computer room. 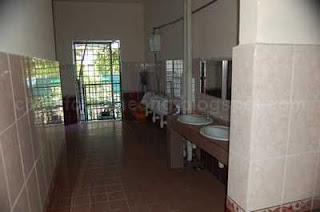 This is really interesting. Lets take a peek at the toilet. Wow, it even has
a fire escape (not!) in case someone lets out a really bad stink. And the
urinals are very very short. Let's go to that door now..... 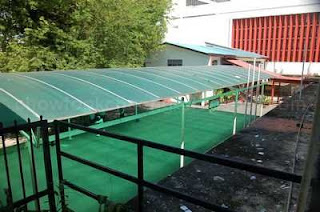 Oho! It leads to the other building (not seen on the left). See the green
shade again for the assembly area? Anyway, see the ledge on the right.
This is where you would end up if you climbed out of the window. There
are no other ledges on the second and third floors so, I guess this is why
they changed the windows. 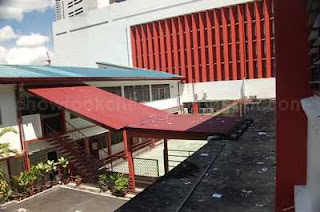 You can see the ledge again as I took another shot from the middle of
one of the classrooms. Occasionally, a student would climb out because
of a "fallen" textbook or blackboard duster. 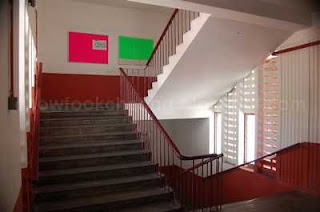 Moving back to the end of the corridor, we are met with the much
wider stairs. I seldom use this staircase when I was in Standards Four
to Six, though as most of my "paths" in the school always ended up at the
other narrow staircase. But I would have the opportunity to use the toilets
in different floors once I get the permission from the teacher. Ha ha ha ha ha! 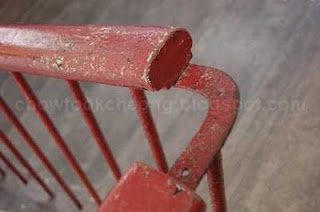 The wooden railings of the staircase has been repainted. The original
was smooth and showed only varnished to show the darkened wood.
However, at this point in time, most of the corner blocks have either
gone missing or maybe, dismantled. 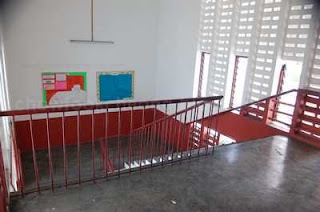 This is the view of the top of the stairs. And this is also the topmost floor of
the school. The only memory I had was walking to the toilet and from the
classes was this awe-inspiring view. Again, the irritating windows on the
right was not supposed to be there. They just broke the bricks to make it.
And here, towards the toilet are the "elite" classes. I remember rushing to
it after my first and last English debate put put by my English teacher. However,
being in "enemy" territory and having to speak in front of everyone unnerved me.
I am so sorry, Mrs. Ng. (or was it someone else?). She had so much hope for
me as I kept getting 100 for my English tests. One thing I hated about these
tests were that I can complete them in the first 15 minutes. Which is fine but
for the rest of the remaining 45 minutes, I had to sit and wait for the exam to
be over. I can't talk, can't look around, can't read book nor even draw anything at all. 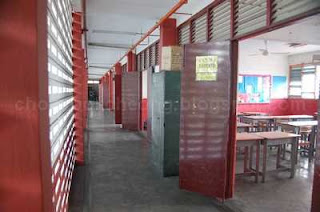 If you look closer at the corridor, on each class, there would be a table outside
for the teachers to wait while the current class is in session or whatever the
teachers need to do, such as marking the exercise books and so on. Luckily,
most of the teachers I passed on the way to the toilet does not teach in my
class or else they would know I am dalying for time. OK, I was lactose
intolerant which means, after each morning drinking the milk in the house,
I would arrive in school and rush to the toilets most of the time. And because
I was just a kid, I thought this was normal. Ha ha ha ha ha
Date: Sunday, November 30, 2008 No comments: Links to this post

One thing I did not know was that towards the end of her school year, Kristine was actually given a CD (for us) depicting her crimes in school. I had second doubts about enrolling her next year but after seeing how she progresses, I think its better to stick with the plan. Her monthly school charges have shot up quite a bit and this is a but uncomfortable for me. But then again, with the school's strategic locations and facilities, I cannot complain. Unfortunately, she still could not learn how to solder electronics parts nor design a good circuit. I must complain about this to her school. 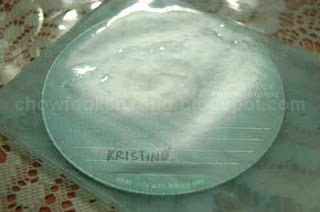 Fortunately, the CD survived intact because when it comes to these
things, they tend to scratch easily and especially with them around. 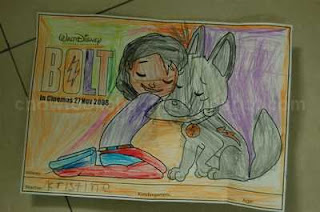 And also, I think I need to find a frame to hang this or maybe, let
Mommy keep them all in a box. Notice she only wrote her name
but not her class and age (at the bottom)? 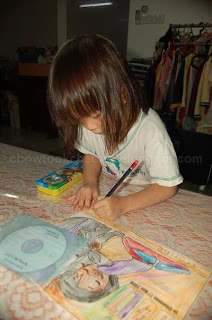 So, I got her write it down. I just mention the alphabet
and she will write it. Clever or not? 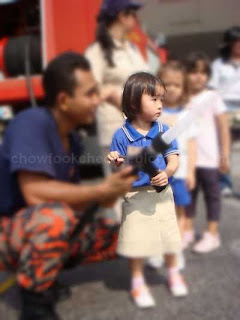 Here are some scenes from the CD. This
is very early in the year when she start
to experiment with scissors. But whoa!
she looked chubby! We did not notice
that before........ 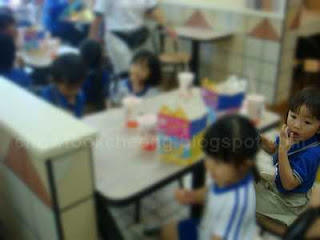 And after the visit at the Hang Tuah Fire Station, it was straight
to McDonalds. I think this is where she starts to like fast food
but months later, whether we have it or not, its not a problem 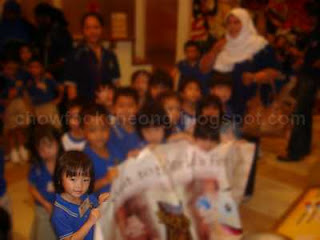 Here is her visit to Hi5 Bread 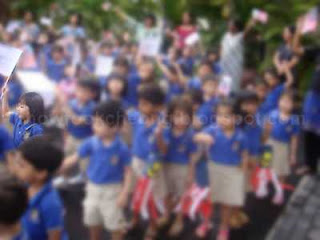 And her Merdeka celebrations 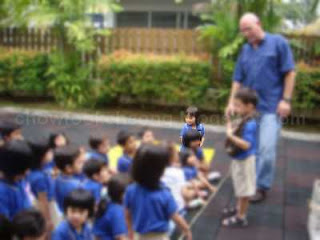 Get to know some animals session
Date: Sunday, November 30, 2008 No comments: Links to this post