Well, today was was a bad day for me because of three incidents:

1) The forgotten detail
I was supposed to dismantle a Toshiba PBX and all of its phones. All I had to do was to disconnect the cables and un-screw the mountings. Simple, right? It was OK except for one minor detail which started when my customer said, "You did remember that (my colleague) promised us that you will connect all the incoming lines directly to the single-line phones once you have dismantled the system."

What she meant was, their six incoming lines, which is still active until the end of the month, must be connected to another set of six single-line phones (the type you find in your house or when you subscribe to a line where Terrorkom insist you must have a phone per line) so that they can still make and receive calls. All is fine until the customer insist that certain lines (specific telephone numbers) must go to certain desks. And on top of it all, their main number but be connected to a cable which can be easily thrown to the roof so that the new tenant cannot abuse it.

All the tasks were easily done except for the last part because that "special" pilot line cable did not end in the office but rather, at the telephone riser. This meant I had to look for the Management Office hidden somewhere in the Basement to ask them to open the doors to the telephone riser. And once it was opened, it was a mess but I was quite prepared because I had my cable tracer (a device which detects the generated tones from one end of the cable. to those who are unfamiliar, its just a big square box which make eh-eh-eh-eh-eh-eh sounds. Ha ha ha ha) 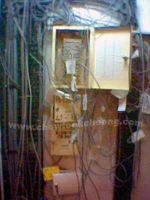 If I did not have the cable tracer, it would have taken me hours to find that stupid cable


2. Falling of from a chair
I know this is stupid as not many idiots can fall of a chair even by accident. I was at another customer where, due to some stupidity in planning, had the PABX system mounted near the ceiling. So, when it came to trace a specific telephone line, remove it and connect it to the PABXI had problems. The telephone box was also mounted near to the ceiling which I could not reach even with a normal chair. (Sometimes, I wished I was at least 10 feet tall. Ha ha ha ha). Since there were no ladders, I spied a trolley and decided to put the chair on top of it.

If you must know, the chair in question are those plastic chairs which has a back rest and also unfortunately, very wobbly legs to match. So, once I was halfway up, the trolley rolled 10 feet away from the wall and the chair slipped under me. Luckily, there were no crashing sounds or it would be very very embarasssing.

By the time I collected the chair (and my wits) my left thumb was numb. Looking at it, there was deep gash and about 1cm of skin was skinned (ha ha ha ha). At that moment in time, I found out that my blood does not have acid in them like the creatures from Aliens. So, I had to apply some Savlon and plaster to it. (Its still bleeding as I'm typing this)

3. Brake Pad Emotions
One of the things I am very protective and particular about, is my car. Its my very first and my own car, so I am quite personal about it. And I would not compromise when it comes to spare parts or maintenance. The story started when for the past two days, my car has not been stopping as well as it should. And it just occured to me that my mechanic said the brake pads were less than 25% (this was months ago). Since I had to go outstation in a few days time, I would need to have them changed asap (because it takes time to wear in the pad)

So, I told my colleagues that I would be late tomorrow as I needed to have the pads changed. As usual, there were "some" statements that indicated I could have done it at the shops in front of our office or nearby, which does not take half a day. One thing led to another and within minutes, we were arguing about the types of pads, my choice of car insurance to my making the wrong decisions and my emotions.

The brakes I used were a bit different because of their stopping power. I was a regular EBC Green Stuff user (until I got married) and then regressed to Don's which is still good enough for me. I would not dare try Metal King (which has great stopping power but wear down your brake disc as well) because years ago, even the seller cannot tell the fakes from the Real McCoy. And when my friend bought the original (which he & the seller thought it was), it cracked after a few months. Anyway, I wanted to go back to my mechanic to have it done instead of the shop in front of our office (selling Thailand made brakes for Kia) but it was met with objections.

I mean, come on. I have been using the car to see customers and since I am not claiming from the company on this (the last claim, I only got 50% more or less due to some forgotten verbal promises and misunderstanding) it would be fair at least my car got what it needed and not some compromises.

Tomorrow, the three of us will be chewing the fat on this. If this goes on and on, there is no point in keeping with the same goal. Moreover, there are some legal matters that my name is not in there.

It jsut happen around 6:30 in the evening in Bangsar. For those in the know, there is a traffic light at the T-junction of Jalan Bukit Pantai and Jalan Ara (middle of the map). I was the third car at the lights waiting to turn left. From the mirror, there was this silver nissan sunny who came out from the left and went to the right lane, assuming that the driver wanted to turn right to go down to Lucky Gardens or Bangsar Village.

As soon as the lights turned green, we, on th eleft lane, turned left (well, we had to) and suddenly, this nissan sunny came on my right, wanting to turn left too. I cannot do anything but watch as the car in front and behind me was very close since everyone was wanting to go home or something. So, this guy in the Nissan (must be a non Bangsar regular) tried to overtake us on what he thought was another lane. Unfortunately, that lane was for the opposite traffic to turn right to Jalan Bukit Pantai where the light just turned green too.

Sad to say, he did not stay on for more as he turned away to Jalan Medan (top left of the map)