We managed to escape from the Little Monster tonight because of a very special belated occasion (and also because I needed to print some cutesy wutesy pictures of Kristine for her Aunt in Singapore) So, we went to The Curve for dinner. There were a few restaurants we wanted to try, Fasta Pasta (Wife) or The Okonomiyaki (me) but in the end, we settled for The Marche Movenpick Restaurant.

Weeks ago, when we passed by, I thought it was some restaurant that specialises in dairy products such as cheese and egg-related dishes (since they has some cows in the front). And hearing horror stories from my In-laws about expensive food in there was of no help. But since tonight is a special occasion, we decided to try (even when my Salary has not been cleared, ha ha)

But once we got in, my first impression was that its just a fancy foodcourt with different decorated dining areas. Since there were a lot of crowd, I only managed to remember a few stalls (country bumpkin here never see all these things before). 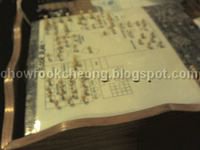 The seating system here is unique. Once you have been allocated to a table, the girl will stick a pin on the map so that everyone knows that table is taken. 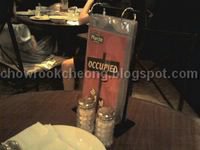 Once you are shown to your table, they will flip the sign saying its occupied (like a toilet)
So others cannot grab your tables and you are then free to wander around ordering your food 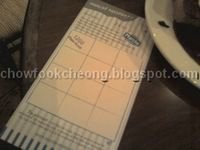 This is your passport (which you have to pay RM200 if you lose it and I forgot to ask them why)
Every stall you ordered food from, they will stamp your passport for that order
Later, when you're ready to leave, they will total up your bill based on the passport 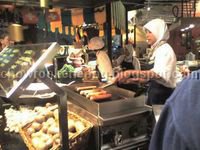 This is the stall which has Rosti, which is some kind of fried potatoes
(I thought it was some fancy omelette)so I got a plain one for Rm6.50
I was tempted to get the giant sausage too 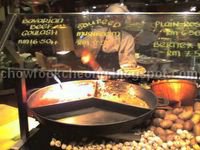 This man is making my Rosti.
The red stuff on the big pan must be the RM16.50 Bavarian Goulash (which I did not order) while on the right is the Mushroom thingy (which the girl ahead of me ordered once she saw how plain the Plain Rosti was)
Other stalls had picture of the dishes they serve but not this one, so, since I was afraid to ask what the heck Rosti was, I took a chance....... 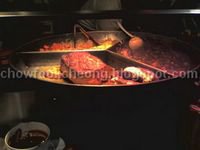 See the thingy that looked like a loaf of bread?
Its the meatloaf Wifey ordered. Behind it must be the sauerkraut and I am not sure what that is on the right. 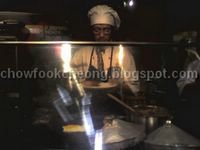 This guy sliced and then fried the meatloaf 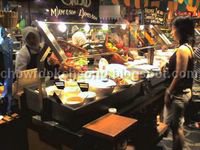 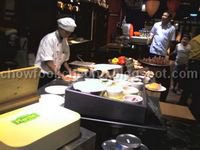 We passed on the Pizza 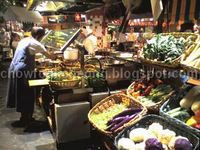 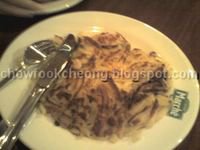 This is my Plain Rosti, which is fried potatoes and since we love potatoes, it was a nice dish 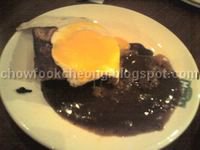 This is my Wife's Meatloaf, covered in peppersauce and topped with a very runny fried egg (I wished there were some toast to go with that) and some sauerkraut
The meatloaf turned out to be very salty 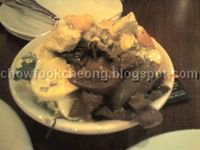 This is the Salad my Wife got for us 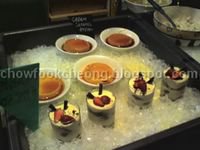 By this time, we're quite full, so no sweet stuff, 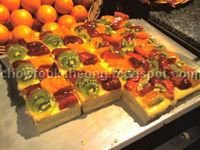 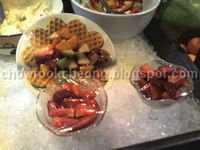 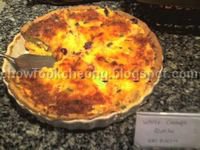 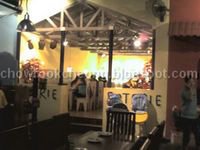 A shot of one of the unique eating area 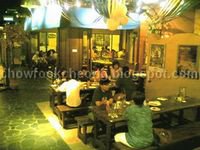 Here is another one. All the shots were a bit off colour because of the spot lighting in a dark place and I was using my Wife's Panasonic VS2 to take pictures

So, after the meal, I was ready to face the horror of paying the bill. But imagine to our surprise, it only came up to RM31.63 (maybe its because we did not order any drinks since we did not find any to our liking) which is a far departure from the family of five ahead of us (Their bill was Rm144). They had this little gate which will open once you settle your bill. Ha ha ha ha
We actually did not order much because maybe my expectations were a bit different as I expected to see more Swiss dishes and not stalls like Mamak Fried noodle, Japanese stall and so on. Would we go there again.
Why not?

After our dinner, we went to Starbucks in Ikano since the one in The Curve was a bit too loud as they're doing some Halloween stuff there. And for the first time in three years, I got my Ice Blended Coffee again. I just hope I would be able to sleep tonight.........
[Update: 3:21 AM]
Yep, I am still awake. And my heart is still beating fast. Damn!

Yeah, I am still cleaning the stupid termite gunk off the plastic parts. Wifey kept asking why should I bother since I am not going to finish them anytime soon. She is right, you know. But they hold a lot of memories for me, not only because they're hard to find now, but I just can't let go, after so many years of buying them (before we got married) 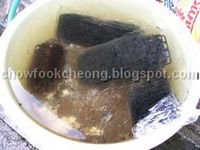 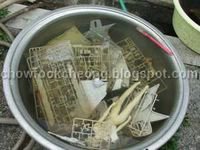 More plastic parts to clean. The female model is a resin kit of Sarah from Tekken video game
And somewhere inside there is Cloud Strife from Final Fantasy VII, I saw his body but as far as his motorbike is concerned, I only found two of his wheels 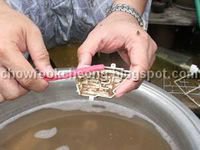 For the past few days, we're having trouble sleeping because of this Little Monster. She would cwy and cwy and cwy because Kristine prefers to play instead of getting her normal sleep. This what she did: 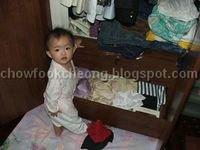 Kristine has learnt (within days) how to open Mommy's drawer, climb into it and start pulling all her clothes out 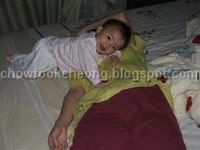 Kristine knows how to beat Mommy at wrestling 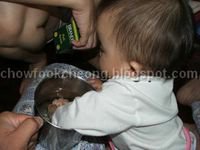 Kristine discovers ice water (my drink, actually)
She would put her left hand in, when its too cold, she would take it out and then put her right hand in. Then left, then right, then left, etc.
All the time, she put spill some onto the floor, her clothes and she would also lick her fingers too......
Yeah, my drink was spoilt