Finally, after about less than two weeks, Kristine's Omnitrix arrived. She was "asking" for it since last year after watching those Ben10 and Power Puff Girls cartoons fro Astro. And when I obliged, I was shocked that the toy costs RM130.00! And so, after going through the town, no one sold it for less than that sum, as if it was a controlled item or something. What was worse was that those Made In China importers have never heard of such thing as well. I mean, you have Ben10 Omnitrix viewers, Ben10 guns (yes, but its just a rebadged and repaited toy) and otgher Ben10 stuff. But no actual Omnitrix.

And so, I had to scour the eBay for it. And the price was even worse since it was really a hot item with the kids across the other end of the World. And so, for months, I checked eBay atg least once a week until I found the cheapest Omnitrix. And by this time, it was the latest toy to reflect the latest series. The original Omnitrix was almost gone but with prices unchanged more or less.

But finally, its here and although it looked fun, I had to remind Kristine time and time again not to slam it hard with the palms of her hand, like what that kid in the cartoon did. Because, after playing it it for awhile, I found it to be rather fragile and honestly, the toy should cost no more than RM45.00 or so. Still, she is happy that she got what she wanted while my Wife did not share the sentiment since she pointed out that Kristine is a girl. 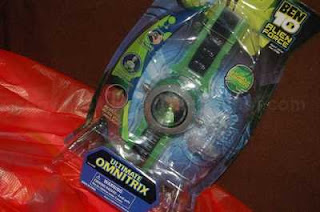 So, here is Kristine's Omnitrix. I paid RM80.00
for it and still get delivered to my doorstep. So,
I have saved RM50.00, which is fine by me.
Kristine's actual reaction to the toy 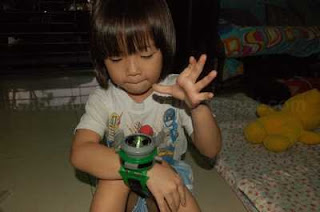 Here, she is demonstrating how to activate the Omnitrix.
First, you turn the dial (which has sounds), to the Alien
you wanted and then, you slam (or push) on the dial to
activate that Alien, just like in the Ben10 cartoon 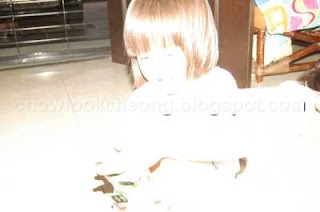 When activated, there would be a lot of sound effects and
big flash of lights. Once that dies down, the Alien would
emerge. Unfortunately, Kristine is still there and this
flash was an error of the Nikon D50 camera. It does
this occasionally. Why, I am not sure. 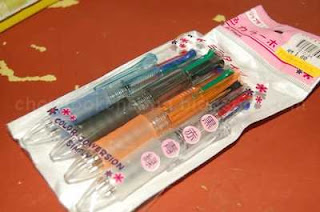 As for Kaelynn, she has no interest in the Omnitrix after
a brief look at it and so, I bought her some multi-coloured
ball-point pens. They disappeared minutes later and I still
can't find even one of them anymore.
Date: Tuesday, June 09, 2009 No comments:

One thing about Gatorades is that its a nice alternative to those fizzy 100Plus isotonic drinks. When I am in the mood, I will get a bottle. This is because they are not cheap, at RM2.xx a bottle compared to 100Plus, which is nearly a Ringgit less. So, how does it taste?

Its like drinking watered down cordial juice or something. 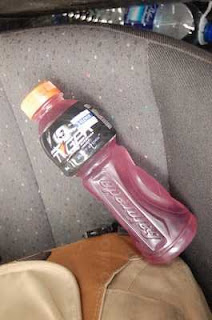 The Tiger Woods edition.
Will it be a roaring success?
Date: Tuesday, June 09, 2009 No comments: