One thing I like about curry puffs is that its a great idea. You have all the curry chicken and potatoes wrapped in a small bundle of goodness. So far, I have tried the famous Tuck Kee Pasar Road curry Puffs and now, this is the next on my list. I am not referring to the brand buy the variation of the curry puffs family. In most puffs, you'd have the normal smooth dough and decorative lips. In this variety, its the ingredients that counts.

But in this case, its the size and also the dough itself. When deep-fried properly, its crispy and yet flaky at the same time while still making sure the contents are not leaking out. Homi gets it right but there is a problem in the sense that it is very oily. Just putting it in the car is bad enough. But when eaten fresh, its wonderful. Still, its delicious and you can see people queuing up for them all the time.

I am still on a quest to look for the "one" which my Mom bought that has some hard boiled egg inside. If only I could remember to ask when I see her every day......... 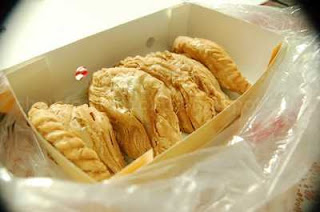 RM1.80 each, and when you buy ten, you get one free. However,
since I only had enough to buy five, they won't even give me half
a puff. Since today is not Sunday, I got the box and a nice bag..... 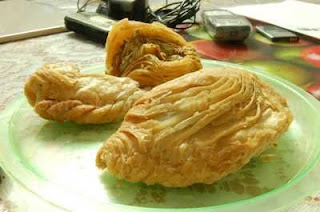 See the fillings? Yum yum! The top one was Kristine's and Kaelynn's
work in the car. Although its hot in both categories, they still went
for it. Unfortunately, the ones in the photo are not fresh but taken
out from the fridge which made it hard and flaky.....
Date: Monday, March 02, 2009 No comments: Links to this post

I was so happy today, after receiving the call from Dynacomm in Mid-Valley. My Nokia 5800 is now back! And so, after work, I rushed over to pick it up. 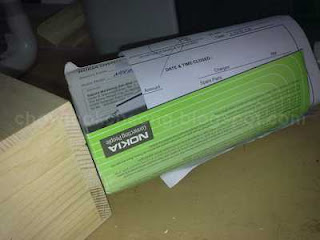 Do not take this warranty card for granted.
Its very very powderful. 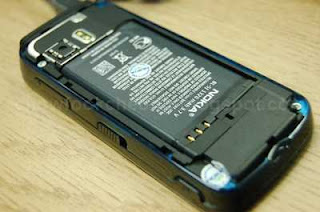 They have swapped an Original NOKIA battery and the sticker
at the bottom, the girl claims, is to prove they have opened the
phone up for repair. Indeed. They have sent to to Dr. Mobile as
its under the Dynacomm group, me thinks. "You must charge it
for at least eight hours, OK?" and so I charged it for ten.
[Update: 03032009 16:20]
I have to send it back again because after a whole night of charging, the battery is still not charged. And its slowly dropping from full bar to four. And so, with a heavy heart, I removed the SIM card and switched the company's phone again.

After a few minutes of frantic searching, and looking a bit lost, he then saw my Nokia 5800 in my hands. "Oh, you've already got it."

"Yeah, I got it last night but the battery's still not charging even after ten hours."

"Here you want to try? I have the charger with me too", I offered my help, not being in a sarcastic way, of course. (But it usually turns out otherwise)

And thinking very hard, finally he told me, "I think its better that you go to a Nokia center where they can fix it up faster for you. If you give it to me now, its going to take days and I will be taking it to them as well. Maybe they might even do a one to one swap for you."

And here I am, not thinking straight for a few seconds after hearing that, or maybe, I was desperate to get my Nokia up and running again, "Really? Where is the Nokia centre?"

"The nearest is in Bangsar, in Telawi 3, and the next is at KLCC"
"OK. By the way, can I have your card in case you're pulling a fast one on me."
"Here you go."

And yes, things that are to good to be true, are usually is. At the Nokia centre, the guy took my particulars, and then after repeating my problems to him, he suggested that I leave the phone with his tech for three days..... and no, no free one to one swap. 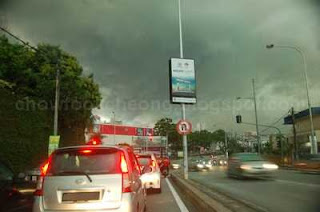 Looking at the sky, its not exactly. By the time I was done,
it was raining heavily. I wanted to take a better shot but
as the clouds changed within seconds, I know the wind
is strong and itsreally going to be a bad one. 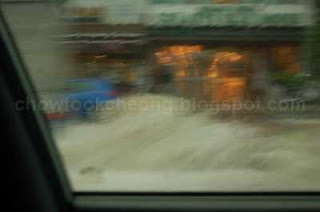 And I do mean heavily. Its like as if someone broke open
a dam and all the water came gushing out. 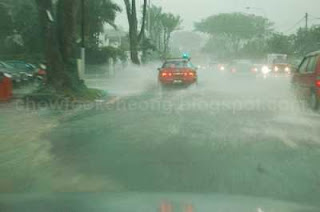 In some parts, you can see the manholes "popping" up due to
the tremendous water pressure. And just after this, some big
car came and "washed" everyone. There and then, the Hyundai
would not start. Yep, water had gone it and with the help of a
passing motorcyclist, we pushed it to a corner. He had to use
this way because Damansara is completed unpassable. After
waiting for my Dad, we jump-started the car and slowly drove
back, with white fumes from the exhaust.........

Funnily enough, after struggling with the car and also soaking wet, the moment I stopped in front of the house and came out, the rain stopped. My wife who was helping to steer ealier on, did not say anything much because she knows I am not in the mood. And neither is my Boss who mentioned that I have missed the monthly Department meetings twice in a row......
Date: Monday, March 02, 2009 No comments: Links to this post

After collecting my Nokia 5800, I went to ACE Hardware to get a replacement garden hose nozzle as the oldone rusted. And then I saw it, Pelican cases! They're now at ACE hardware! But bear in mind, you have to sit down for this: Because once your excitement is over, be prepared for another shock, Okay? 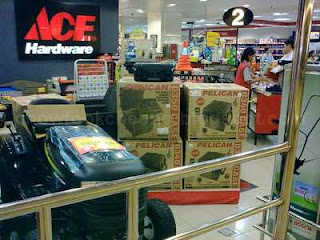 There were three types of Pelican cases, with the "big" one
being the main attraction. Unfortunately, it was also not on
display, only the smaller case and one that looks like it can
store a rifle in there..... 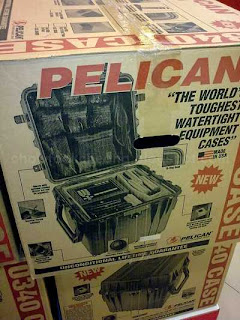 Here is a close up look of the case. Oh, its about two thousand frigging
ringgit. But since I've already got mine, I am not going ga-ga over this 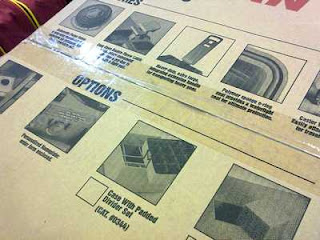 This case comes with the pluck and pull foam inserts 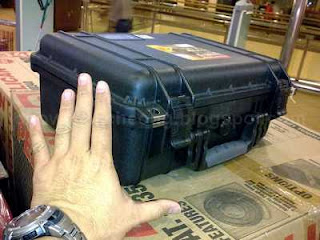 The smaller case is retailing for about nine hundred ringgit.
Not bad until you go up and see the case personally. Then
you'd start cursing at the price. Its too expensive for such
a small case. For the same amount, I could have gotten 2
Hardigg cases from the Internet instead.
Date: Monday, March 02, 2009 No comments: Links to this post 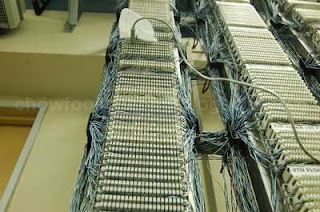 One port in the tag is one phone. One phone has a few message lights.
To cancel one message light, I have to press 4 digit keys and also hang
up the phone. And I am still at the beginning.......... haih.
Date: Monday, March 02, 2009 No comments: Links to this post