Just thought you should know about this, and I got this from jeffooi's blog. Makes you think what the Hell our country is regressing into. It will be another Indonesia soon and History will repeat itself. But you also have to stop and ask yourself, is this a true E-mail or just someone trying to stir things up?

Then again, just by looking around the Country, it does not matter if the E-Mail is true or not. Open your eyes and see things for yourself:

I have been meaning to pen some thoughts for some time now, to let people actually read the views of the typical ‘overseas Malaysian’ who is kept away. I realise that my email is rather long, but I do hope that you would consider publishing it (and also keep my name private!).

I shall start by telling a little about my background. Mine is a rather sad tale – of a young Malaysian full of hope and patriotic enthusiasm, which is slowly but surely trickling away.

I am very different from many other non-bumiputeras, as I was given tremendous opportunities throughout my childhood. Born into a middle-class Chinese but English-speaking family, I grew up with all the privileges of imported books, computers, piano/violin lessons and tuition teachers.

My parents insisted that I should be exposed to a multi-racial education in a national school. In my time, my urban national school (a missionary school) was a truly happy place – where the Malays, Chinese and Indian students were roughly equal in proportion. We played and laughed with each other, and studied the history of the world together during Form 4, with one interesting chapter dedicated to Islamic history.

Though 75% of my teachers were Malays, I never really noticed. My Malay teachers were the kindest to me – teaching me well and offering me every possible opportunity to develop. I led the district teams for English and Bahasa Malaysia debating competitions. I was the only non-Malay finalist in the Bahasa Malaysian state-level elocution competition. My Malay teachers encouraged me to transfer to a government residential school (sekolah berasrama penuh) so as to enable me to maximise my academic potential. I refused because I was happy where I was, so they made me head prefect and nominated me as a ‘Tokoh Pelajar Kebangsaan’. Till this day, I am absolutely certain that it was the kindness of all my Malay teachers which made me a true Malaysian.

I excelled at school and was offered a Singaporean government scholarship to study overseas. I turned them down because I wanted to ensure that I would remain a ‘true Malaysian’ in the eyes of Malaysia. So I accepted a Malaysian government scholarship to study at Oxford University. Throughout my three years as an undergraduate, the officers at the MSD looked after me very well, and was always there to offer support.

I graduated with first class honours, and was offered a job with a leading investment bank. The JPA released me from my bond, so as to enable me to develop my potential. I shall always be grateful for that. I worked hard and rose in rank. My employer sent to me to Harvard University for postgraduate study and I climbed further up their meritocratic ladder.

Now I am 31 years old and draw a comfortable monthly salary of US$22,000. Yet, I yearn to return home. I miss my home, my family, my friends, my Malaysian hawker food and the life in Malaysia. I have been asked many times by Singaporean government agencies to join them on very lucrative terms, but I have always refused due to my inherent patriotism.

I really want to return home. I have been told by government-linked corporations and private companies in Malaysia that at best, I would still have to take a 70% pay cut if I return to Malaysia to work. I am prepared and willing to accept that. My country has done a lot for me, so I should not complain about money.

But of late, my idealistic vision of my country has really come crashing down, harder and faster than ever before.

I read about the annual fiasco involving non-bumiputera top scorers who are denied entry to critical courses at local universities and are offered forestry and fisheries instead. (My cousin scored 10A1’s for SPM and yet was denied a scholarship).

I read about UMNO Youth attacking the so-called meritocracy system because there are less than 60% of Malay students in law and pharmacy, whilst conveniently keeping silent about the fact that 90% of overseas scholarship recipients are Malays and that Malays form the vast majority in courses like medicine, accountancy and engineering at local universities.

I read about the Higher Education Minister promising that non-bumiputera Malaysians will never ever step foot into UiTM.

I read about a poor Chinese teacher’s daughter with 11A1’s being denied a scholarship, while I know some Malay friends who scored 7A’s and whose parents are millionaires being given scholarships.

I read about the brilliant Prof. K.S. Jomo, who was denied a promotion to Senior Professor (not even to Head of Department), although he was backed by references from three Nobel Prize winners. Of course, his talent is recognised by a prestigious appointment at the United Nations.

I read about UMNO Youth accusing Chinese schools of being detrimental to racial integration, while demanding that Mara Junior Science Colleges and other residential schools be kept only for Malays.

I read about the Malay newspaper editors attacking the private sector for not appointing enough Malays to senior management level, whilst insisting that the government always ensure that Malays dominate anything government-related.

I read that in the government, not a single Secretary-General of any ministry is non-Malay. The same goes for all government agencies like the police, armed forces, etc.

I read about UMNO screaming for the Malay Agenda, but accusing everyone else of racism for whispering about equality.

I read about a poor Indian lady having to pay full price for a low-cost house after being dispossessed from a plantation, whilst Malay millionaires demand their 10% bumiputera discount when buying RM2 million bungalows in a gated community.

I read about my beloved national schools becoming more and more Islamic by the day, enforced by overzealous principals.

I read about my Form 4 World History (Sejarah Dunia) syllabus, which now contains only one chapter of world history, with Islamic history covering the rest of the book.

As I read all this, I tremble with fear. I love my country and long to return. I am willing to take a 70% pay cut. I am willing to face a demotion. I honestly want to contribute my expertise in complex financial services and capital markets. But really, is there a future for me, for my children and for their children? I am truly frightened.

I can deal with the lack of democracy, the lack of press freedom, the ISA, our inefficient and bureaucratic civil service, our awful manners and even a little corruption. But I cannot deal with racism in my homeland.

I think this is the single biggest factor which is keeping people like myself away. And bear in mind – there are so many of us (researchers, scientists, bankers, economists, lawyers, academics, etc.). What people read about in Malaysia (like Dr Terence Gomez) is but the tiniest tip of the iceberg. You will be amazed to know about Malaysians denied JPA scholarships (which would have made them civil servants), took loans to attend Ivy League universities, but who are later asked to advise our government (on IT, economics, etc.) at fees running to millions of US dollars. Such information will never be published because it is politically incorrect.

As a Christian, I pray for God’s blessing on this great country of ours. I pray that He blesses our leaders with the foresight and humanity to see that this will not work and cannot continue. I pray that they will have the strength to make our country a home for all Malaysians and that they will have mercy for the poor, including the non-Malays. I pray for true racial harmony and acceptance (not just tolerance) in Malaysia.

Sometimes I really have to concentrate on the things I see in front of me apart from looking for rebelious vehicles or suicidal motorists/cyclists/pedestrians. There were a few instances where the subject in front of my car was worth taking pictures of yet I just stared at it like a blur sotong.

For instance, today:
1) Police Waja took a wrong road and went against the traffic
2) Old Lady fell down outside Assunta Hospital
3) A Black Proton Saga got whack terribly from rear right
4) A very very fat guy on a small kapchai
5) Bush fire at the Shah Alam Glenmarie/Subang interchange 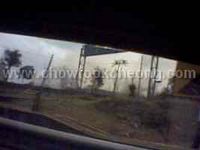 15:45 Bush fire at the Subang/Shah Alam interchange
By the time I did the U-turn to head towards Fedral Highway, I can hear the Fire Engine's sirens