When I was in UK, they had this 1 Pound coin which was pretty nice. Sure, you can exchange it for a crisp one pound note is you hated it. But the coin was incredible to hold. When you hold it in your hands, its not to large, not too heavy and also, it just kind of feels right. It was always a sad time when I had to part the coin while making purchases.

When I came back to Malaysia, they had lready started to roll out the same concept; the RM1 coin. It was nice but somehow, it felt very inferior and like the 1 sen coin, it felt and smelt metallic, even on the hands. Compared to the Bristish coin, the RM1 was a let down (for me) just by looking at it, its as if someone just casted in a rush. One thing that I love about the British coin was the almost 3mm edge. The straight edge with the words stamped into it as well. This maybe could be a seciruty feature to stop people counterfeiting it. Then again, I could be wrong.

Sooner or later, the RM1 coin was bound to be counterfeited. And I was right. A few months ago, some poor monkey was caught. And his tools for doing such deed was simple. So, its not a suprise that there were a lot of fake coins in circulation. But to us normal Joe Public, we're either too busy to notice the fakes or we might not even know how to identify them.

Anyway, you might have heard the latest news that the Government is going to take the Rm1 coin out of circulation by December 7. Which is fine until everyone starts to panic. You have Banks trying to "catch" counterfeiters (or in this case, innocent public), charging the consumer for changing the coins and also, traders refusing to accept the coins. 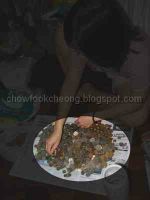 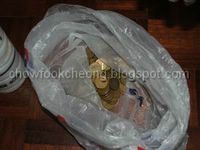 This is what's so frustrating about Malaysia. Then again, it is also one of our most famous traits.


For example, when someone laid the Rules about something, it would be strictly enforced until after a few weeks later. Because the person in charge of enforcing the Ruling would find it tedious and one day, they might just "stop" enforcing it since it is too troublesome and besides, no one misses it. After that, its forgotten completely. That is why, when there is something new, you'd better go see it within three months before the rot starts.

For example, when you have the "No outside food" rule in a Food Court. This means that, you cannot bring in any food or drink that is not sold within the Food Court into the, Food Court. Never mind if its located next to a British Cash & Carry Hypermarket. So, when it was first launched, no one dared to do it. Even if they bought the stuff, they would not open it there and then to consume it. No, they would dutifully buy those "debit" cards from the Food Court counter and use them instead.

But now, no one gives a fuck. You just come in, look at the crap and almost edible food in the Food Court. If it does not whet your appetite, you can then go buy the food outside and BRING it in, sit at their tables and eat it. Yeah, no one gives a fuck about it. Unless the person enforcing it had a bad day.

By the way, try not to eat there because when Wifey and a few others waited for their food, the staff there worked as if they're ready to start their Hari Raya fasting. 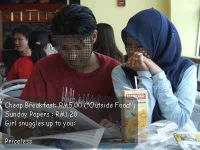 The service at Tesco's Food Court was so bad
And what's with the crap "debit" card which you
buy and then go back to the counter to change
back for cash once you have finished using it?