Everything was fine on a Monday morning. Although we anticipated that there could be a massive traffic jam as this was the start of the school term, there wasn't.

So, after dropping my wife off, I was happily cruising to my office. Bliss is where your route is free of other cars and what-nots on four wheel, and the opposite lane is trapped in a jam. Ha ha ha.

Anyway, as I was about to reach my office, I had to stop at the lights. When it turned green, I begain to make my right turn. Now, this road is a bit different as the two lanes on my left are meant for traffic going straight, while the other two lanes on where I am now, are for traffic turning into the right. Since I was the first car, I began to slowly move off. And suddenly, (out of the blind spot) a motocyclist zoomed past me.

Stupid moron thought it was fun to squeeze between the cars and thinking those at the lights would not move their cars too early. (If I was driving MY car, things would be very different now). Either that, I believe he has not achieved his "Beat the lights" quota for the morning. Luckily, he was fast enough to control his bike and still managed to avoid the other car on the opposite side of the lights. 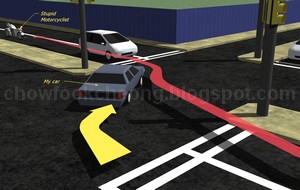 This image nice or not? I did this with Google's free Sketchup Software
Date: Monday, June 12, 2006 No comments:

The Gen2 BolehLux from "Europe" 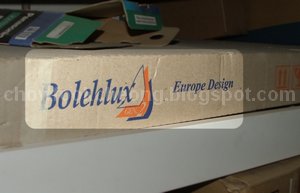 I'm a Boleh girl, in the BolehWorld
Life's a copy, it's fantastic
You can copy here, you can copy there
Can't Imagine?, its your "own" creation!
Sung to Aqua's "Barbie Girl"
Date: Monday, June 12, 2006 No comments: