There was a heavy downpour yesterday while I was busy re-installing a customer's PBX in Sri Damansara. By the time I left, it was still raining. Because the rain was so "sudden" most of the area nearby were flooded.

Anyway, since my customer was located on the high ground, there was nothing to worry about. Until I turned into a corner and went straight into a one foot deep puddle............

The force was so great that my car's engine "swallowed" a lot of water. As it was about to stall in the middle of the puddle, I went into low gear to try to keep the engine from dying. Once we're out of it, my car acted like it was already about to give up the ghost. It had problem trying to move, even in the first gear. And the exhaust was giving white smoke. Opening the hood, the whole engine bay was wet as expected. And the air filter was wet too. So, there is nothing I could do but to pull the car by the side and hope the engine is hot enough to evaporate some of the water. For the rest of the hour, it was a long struggle back to the office. I had to rev the engine all the time.

So, the damage was:
-Water in the engine (suspected) via air filter
-Water in the distributor cap (I think)
-The black vinyl lining under the bumpers, well arcs, etc. were pushed back and were scraping the ground.

By the time I got back to the office, I got a clearer picture of the damage:
-Front license plate broke in half

Then when I went home, I discovered the reason why I found a loose bolt near my car (and threw it away). It held the left wheel arc metal piece and my side-skirt together. The force of the water pushed it out.

Anyway, after a visit to YS's workshop, everything was fine because the damage was not so extensive. Most of the water had been boiled off during the better part of the day and there was no water in the engine (Hooray!). So, I was told to run the car for a few days and if the problem persists, come in again.

My damage this time?
-Cost of new spark plugs (Hooray! I am going to get the NGK Platinums again)
-Two new bolts
-The sound from my exhaust is a bit rough, like there is a hole.
(sometimes, my car sounds like a Subaru now) 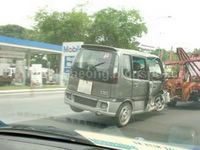 On the way to YS..........
Spotted this poor Kenari at the Federal Highway 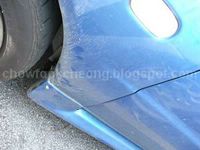 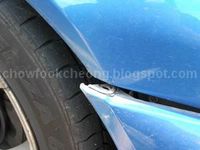 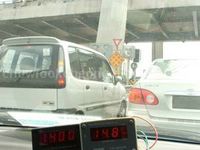 The car was so slow, even a queue jumper got in without any effort