I just go the keys to one of the company's car a few days ago. The car would be used by me as my daily transport, to deliver stocks and also, for me or my technicians to travel outstation within West Malaysia.

So, after getting the keys, I began my SOP (Stand Operation Procedure) to evaluate the car. Bear in mind, it has been bought in 2004 and has been abus...er, driven by quite a lot of people. After a good wash and a new car freshener, it was starting to look better.

Taking it for a drive, the car felt quite "tall" to me and as the steering column is not adjustable, I had to stretch out my hands. This is because, if I moved the seat closer, I would have a problem with the clutch where the biting point is quite high. In the end, I felt like driving a double-decker bus but with the driver's seat at the top.

For the mileage, I filled it up with 3/4 tank (RM30) and after 48km, the fuel gauge used slightly more than half a tank already, which is quite alarming. Even my Satria would not consume that much. Then I reminded myself, all these readings would be false (except for the fuel gauge) since the speedometer cable is faulty. So, for two years, I would not believe it has used up 77,000Km. Ha ha ha ha ha.

Anyway, since the yellow engine light is coming up, its time for a major service with Perodua.......... soon-ish.

But this weekend, I'd need to clean the dahsboard area, the inner sides of the doors, cigarette ash from the carpets and also, the usual engine bay servicing. One thing I noticed was that there is a second fan (not sure if its A/C) which you can activate with a remote. Once I get my camera back, I will take pictures of it.

Took my dad for a ride and with Kristine running about in there, I was so tempted to lock her at the rear portion........ 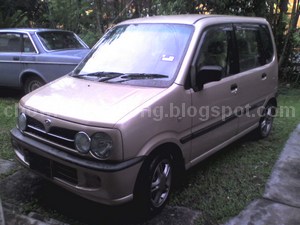 One thing I like about this car is that you can activate the
alarm from quite a distance.