This is just the very thing I was afraid of.

I have just been to a customer who is sub-contracting us to deal with their client's PBX. He knows nuts about the system and the way he dealt with it really shocked me. Suffice to say, in the course of Business, I have to make sure that everyone is on a win-win situation except myself, as I really have to re-install the whole system from scratch tomorrow. All those cables and programming are fun......... really.

Except for one itty bitty fact: The whole is in KL and (according to the AW Forum started by Klipschj) the roads would be closed from 11AM to 715PM for the Le Tour De Langkawi. That means I would have to lug my Super-Duper Heavy Toolbag via the Monorail.

To make matters worse, my Salary by cheque has not been cleared (most probably by Chinese New Year's Eve) so we can't go anywhere nor buy things for the New Year this weekend. This is really pissing me off and adding unecessary stress. 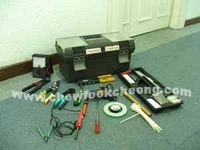 The Right Tool for the Right Job
This is my Toolbox since 1996. It is only opened when more serious jobs demands serious tools. (OK, I can't fit all these into my waist pouch)It can be used as a stool, kill people and even used to intimidate younger Technicians or irritating busybodies.

Kristine gave us lot of sleeping problems last night and made me dream this:

I was in some area in Shah Alam, trying to make sense of where I was, because it seemed I made a wrong turn. So, there was one junction where the traffic light was not working and we have to drive carefully. I am not sure if I was in the right of way or not but I decided to rush behind the multi-coloured Volkswagen, the one from the ProJET advertisement last year. What resulted was a car-t-car confrontation between the Volks and another white car in a single lane.

I am not sure what happened but hte next thing I know was that my beloved Satria was lying next to a big Monsoon drain, with the windshield, roof, bonnet and boot inside the drain. So I spent the rest of the day collecting the part, while desperately trying to call my friend on the mobile phone to look for the car as he was in the front of the traffic. Which as usual, he did not answer or when he did, the line was so bad and I had to repeat eveything thrice, which pissed me off.

I am not sure what the dream meant but sure as heck, I missed the opportunity to control my stress. 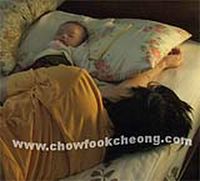 Scene of the aftermath: Kristine-7 Mommy-0
Disqualified: Daddy-for not helping