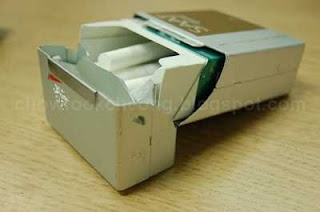 With everyone out of the house today, I finally have the opportunity to open the toys. These are the Phaser and Tricorder from the latest 2009 Star Trek movie. And they were made by Playmates, a company which started making Star Trek action figures and toys since Star Trek Generations. But there were a few complaints back then because most of these toys, although were aimed at kids, were snapped up by adults, who complained that it was either too small or not accurate enough when compared with the actual prop in question. Still, it was the only company which successfully made Tricorders, Phasers and other electronic toys.

And now, in the latest JJ Abrams movie, they have done it again. No, I am not going to go on about the action figures, which, after what MacFarlane has done to the action figure industry, its not as good. Yeah, just one look at a MacFarlane figure, which has so much details. Anyway, I am here to talk about the Phaser and the Tricorder. 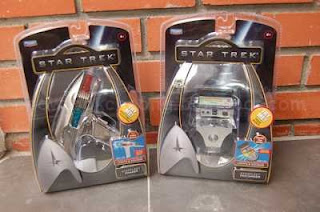 Playmates have opted using these clamshell packaging
which is quite tough and they have removed the
"Limited Edition" serial numbers.
Phaser
I have no idea why they came up with a shiny weapon. It reflects everywhere and I am very certain that in combat situation, all these Starfleet Officers would be discovered very easily. Not only that, its slippery and impossible to remove any fingerprints. If they Captain insists on doing an inspection, boy, you've had it. Still, the phaser looks quite nice but there is something missing at the back. And the first time you held it in your hands, it feels quite weird as if you're wank... er, holding a small chocolate bar. Unlike the TOS, there is no small itty bitty Phaser I attached in there. Its just one complete weapon. 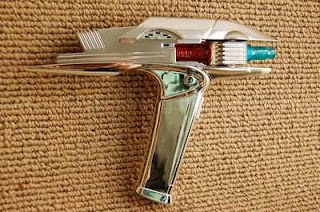 First is the Phaser, which is about eight inches long.
The movie have followed along the lines of the TOS
phaser. But somehow, the more I look at it, the
phaser design seems incomplete, especially at the
back where the heatsinks are. 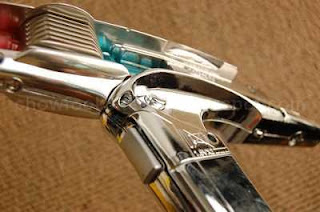 As the Phaser is all chrome, its not easy to take photos
without it reflecting me. Anyway, from here, you can
see the trigger button. Look to the right, just after the
grip, is a smaller dimple, which is actually the switch
for the toy. And where your thumb rests, there is a
button to switch the barrel around. And as you can
see from the grip, already there are fingerprints.... 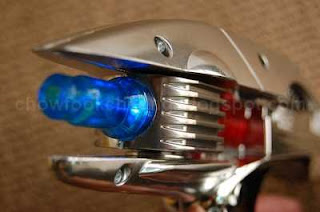 With the blue barrel, you are set to stun 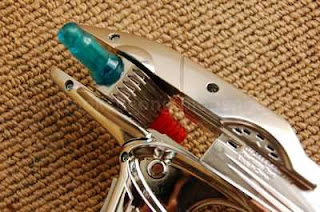 Press the thumb button and it changes to the red barrel 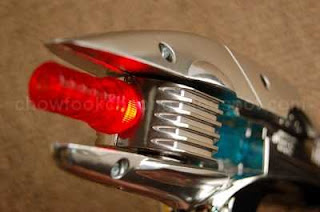 And now, you are set to kill! 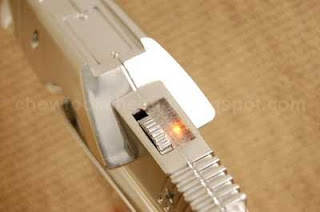 And oh, at the top, where you fiddle with the settings
here, you get the "power increase" sound effect.
However, the rotary switch feels very loose.
After looking at the toy carefully, I believe they
do not have to mould the phaser in two halves where
its so obvious. They could have moulded it the other
way round and use the screws to secure it completely.
Maybe its the manufacturing cost that stops them
from doing it in the first place Just like any Star Trek phaser, there are no trigger
guards. And just like the TOS, the grip is too small
for me. In real life, if the barrels are too hot, you
can get your trigger finger burnt. So I still very
much like the Star Trek V and VI's Assault
Phaser below: 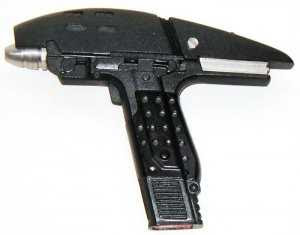 At least the grip is big enough. So, its a matter
of time before all the silver chrome wears
out and I can do a repaint on it. Or maybe,
do another modified phaser.........
Tricorder
One of the thing which turns me off from the original sereis was, apart from the outdated cheesy special effects, was the Tricorder. Granted at that time, precious sensitive equipment were housed in a leather case and equipped with a strap. So, the Tricorder mirroed that look and although its too big for a single hand operation, its still too small to be carried with the stap on your shoulder. It makes you look like you're carrying a ladies handbag and making you look so, pondan.

That is the reason why I preferred the Next Generation. The Tricorder in that era is an actual handheld device. Here, in this movie, they compromised and redesigned a smaller tricorder as the actors have problem with the first design. 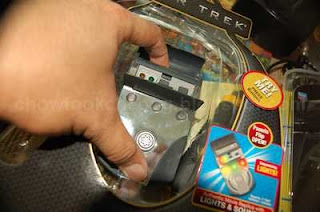 One thing I hate about getting the Tricorder out of the
plastic is that apart from the securing wires, the are
moulded tabs which secures the toy tightly. 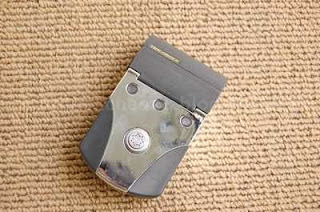 Once out of the box, its quite small. 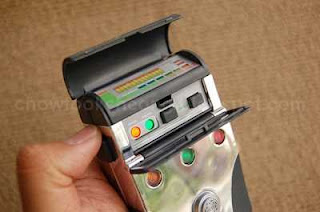 When you push the black button upwards, the two flaps
would pop open. And that's where the lightbulb in my
head flikered. Yeah, this reminds me of those old electric
shavers or those fancy cigarette holders. Anyway, I
immediately do not like the design as the lower flap
keeps blocking my fingers when I use my thumb
to press the buttons. It needs two hands. And also,
the Tricorder screen is just a sticker. The movie did
not show the screen or any other close-ups and so,
Playmates got away with it. Bah. 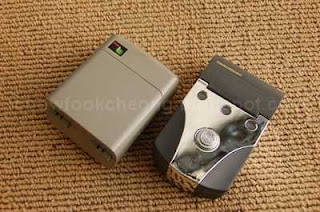 Comparing the Tricoder with the Next Generation's TR-560. 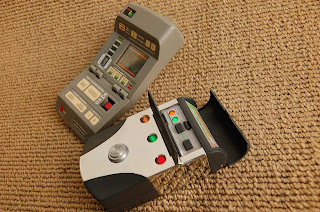 And again, when both flaps are open. There are eight
sounds in total. Three in each of the black buttons
and two for the flap when it opens or closes. 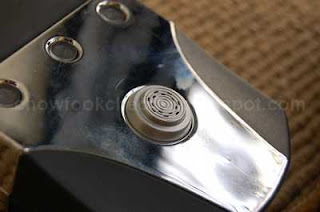 With the chrome all over the place, its hard not to get
fingerprints on it. Moreover, there were some when I
got it out of the box and they cannot be removed as I
think the swea of the packer's hands have already
etched into the chrome.

The current 21st Century controversial Tricorder......
Date: Saturday, May 02, 2009 No comments: Links to this post

This is one application for the Nokia 5800 which I find is quite comforting to my Engineer side. This is the Energy Profiler v1.2. What it does is, records the energy usage of the phone in terms of power consumption, Wifi signal strength and even during a phone call. Once you have recorded the process, you can store them in a file. Later on, you can retrieve the file and then look back at the information. You can also scroll the graphs left and right, and rescale and also, compare them with one category with another via overlapping.

Which feels, to me, like what a Tricorder in Star Trek does. Wahoo! 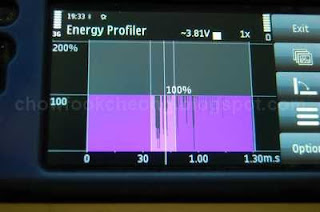 Not sure what this one is, but it went 100% when I
was using the Music Player 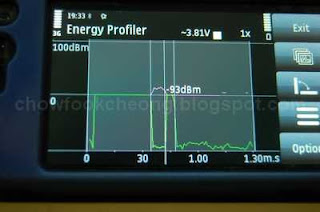 This is where I dialed home and got a wrong number as it
entered into a company's voicemail. The green lines are
the announcement from the voicemail while the purple
is me replying and apologising. Shows how difficult it is
to dial and drive. *ahem* 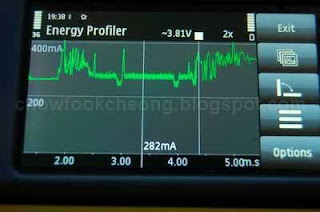 I think this is where the Garmi XT logged onto to
the GPS satellites. But then again, I am not sure
as I recorded a few files and forgot what each one
was for. I even lost the one where I took readings
of the Wifi signals around the house. 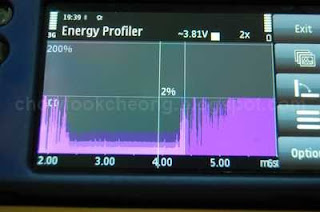 I think this is where I started the music player.
Too bad there is option to let me put in a foot
note about wht this spike or that spike is for.
Date: Saturday, May 02, 2009 No comments: Links to this post

I have been trying to get the V21 firmware updated but to no avail until recently. Using the Nokia's Software Updater did not help at all. And so, after scouting around the Internet, I realised that the firmware was only available since last week to Asia Pacific. For the rest of the World, they would have to wait. Still, the Software Updater gave me no answer. That is, until a few days ago.

From the Internet, the advise was to download the firmware via the phone itself. And so, once I followed that, it updated the Nokia 5800 within a few minutes. Since I am not so critical about the phone, I did not notice much about the update except these:

2) You can now take video from the secondary camera as well.

4) During SMS or text entering, especially on the Alphanumeric mode, pressing the "*" would bring up a larger symbols table.

5) It hangs less often and if I need to restart the phone, I must remember not to touch the screen until the Nokia Handshake animation comes on or else the screen would go white while the phone works as normal.

7) The startup time is noticeably shortened too.

But personally, maybe its my own imagination but I do feel the phone does not hang too much now. Or maybe its just that I feel much relieved that the firmware has been updated. The kind of feeling everyday when your anti-virus does a successful update........ ha ha ha. 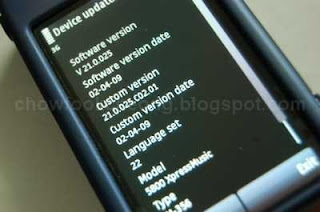 Goto->Settings->Phone->Phone mgmt.->Device Updates->Options->Check for updates
And (in my case) log on to your Wifi to start downloading
Oh, make sure you back up your phone first just in case.

Here is a YouTube video I picked up from the Internet. You can see how fast the phone is operating
Date: Saturday, May 02, 2009 No comments: Links to this post 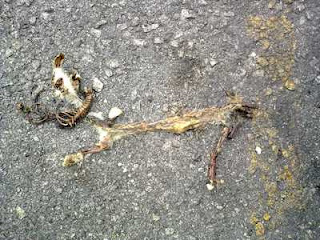 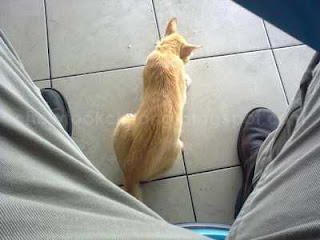 El stupido of the Year

You know, I just hope this is not true. I could cite him
as being uneducated but then again, after watching
a lot of You Tube videos and also Jackass, I think
everyone's regressing to ape stupidity.
Date: Saturday, May 02, 2009 No comments: Links to this post