When I came out of the customer's office, it was already 7pm. And I hate coming out after this hour because of what I am going to see: Crows practising their dive-bombing on my car.

However, today was different because there are no noise. You see, at this time, the sky would be dark and noisy, with all the Crows flying about in the trees. But today, it was quiet. Dead quiet except for a few loud bangs.

No, its not the terrorists (but close enough) but DBKL (Dewan Bandaraya Kuala Lumpur) culling the Crows. What they did was to sit around the Laman Tun Abdul Rahman (a fancy word for a small open space enough for one to run around while peeing all over the pace). While aiming their shotguns above them. There were four personel; two to collect the dead birdie and two to shoot the not so dead birdies. It seemed like they are only allowed to shoot at the space above them and not anywhere else.

After some loud bangs, the crows knew enough not to fly over the area. Some "spy" crows who decided to check if the coast is clear, gets shot. And it is sad to see them get it because of the way they fall to the ground. Those who die instantly in the air, falls with a big thud, like the sound of a heavy silk purse. But the ones wounded in mid-flight sort of glided like a jet with engines lost on one wing.

Anyway, after half an hour, as the body count rises, I am getting a bit deaf as these shotguns are really loud. I think to myself, why can't they have a shotgun with a silencer? This way, they get more dead crows. Unless its a "sport" for them, to shoot at moving targets. 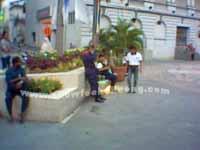 So, there they are, loading the shotgun and shooting in the sky, oblivious to the busybodies who are slowly turning deaf

This guy don't even bother aiming as he's quite good shooting from the hips
Hippie shooter?

A shotgun shell. Too bad I could not reach it fast enough before the guy collects it back. Maybe its to prove to the accountant that they actually used it or maybe, its just to calculated the bullet:dead crow ratio

This reminds me of the farmer and his dog. Once the poor rabbit has been shot, the dog would run over to fetch it back to his Master

There were quite a few dead crows

Here, he is carrying a dead bird and about to swing it over to the middle of the circle. And when it lands with a sickening thud

One unlucky crow who flew over the square gets it