So, when do you actually need one of these infernal things?

It is not possible to have them installed in your Office for the reason no other than "just in case". Your Office must be making ENOUGH calls and to the right DESTINATION or else they would not be interested at all. Some of them would be asking you about your monthly phone bills and even taking a look at it. This is because the auto-dialer works when you make calls to mobile phones, trunk and International calls. So, even if you make about 1000 local calls, no one is interested.

But there are a few problems:-

1) Paying for the Bill
Everytime you make a call with the help of these VoIP companies, you are actually paying to two parties. Let's say you dial to a mobile phone number. The auto-dialer detects that number and uses the Terrokom line to call into their Gateway. At this stage, Terrorkom owns you. And when the call is through, the VoIP company owns you.

2) Cost of the call
Here is the problem. Even if your call does not go through, you still get charged, by Terrorkom. At peak hours, sometimes its quite difficult to get your call through. Say for example, at the third try, you succeeded in making the call but your first two tries have already been charged. Here is an example:

3) Reliability
Do not forget that these VoIP companies are riding on Terrorkom lines. So, during peak hours, if they do not have enough lines, (afterall, Terrorkom has their own "Loyal" customers too) your call cannot go through. And if the Internet connection is "slow", the quality of voice is affected as well.

4) Service
After years of "testing" these auto-dialers, a lot of customers has become wiser. Now, it is not the rates which attractes them but the service. Just think, when your auto-dialer is fried, see how many days it takes for them to comeover to take a look at it and perhaps charge you as well.

5) Equipment
Some companies would literally give you those auto-dialers for your lines. Some do not. And when those that do not, they would tell you a lot of things why you do not need them. Trust me, you NEED those auto-dialers. The reason is simple. When there are no auto-dialers, they would engage outsiders to reprogram your PBX system into becoming a big auto-dialer. This is fine if you like their services. But there will come a day where you do not want to see their faces anymore. See how long they will take to un-program (if ever at all) your PBX system. And if you're using ISDN lines, the cost of the auto-dialer is prohibitively expensive. So, at the end of the day, having the auto-dialer connected to your PBX is a better solution. If you don't like it, just unplug it and patch the cables back (OK, you still have to call outsiders in). So, there you have it. Unless you're making a lot of non-local calls, the auto-dialer is not for you. Some auto-dialers do come with a "bypass" switch which when things goes wrong, it will not route your calls. However, being easily fried, most of the time the switch is useless.

So, these are the pros and cons with VoIP.

But if your company has their own IP lines, then you do not need these unless you need to make fixed line calls intead of calling your branches.

So, after finishing all the work, we went to Mid-Valley. Surpisingly, although there were a lot of cars trying to get in, we took a big round and went into one of the entrance, there were some vacant parking bays.

I met one of my friend, or rather, she walked up to me. I am not going to say much but she would make a baby very happy, looked a bit like Sarah Mickel Gellar and almost became my girlfriend. Anyway, she is still available, but you must have 5C's to qualify.

Secondly, remember the Laksa on the Second floor of JayaJusco? Trust me, its not the same taste as it was last year. This time, it sucked. 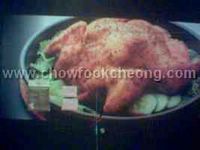 Remember the Shell Lubricant ad? This reminds me of the same guy, all beaten up and bloated, hiding his head somewhere in the garden 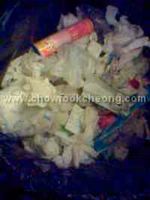 Yeah, someone threw Pampers on the rubbish bin.
Ok, actually I wanted to take some photos of the three "it" (men biologically trying to be a woman) but chickened out in case they can whack me. 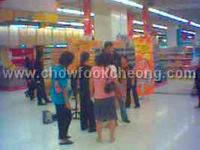 At Carrfour, there is a new promotion from F&N 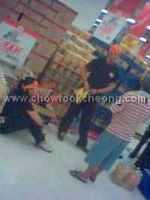 The drink promised to be something new and hip. Hence the youngsters here, preparing their dance routine 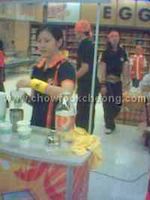 The drink is actually fizzy mango 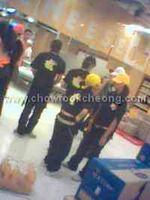