So, after some waiting, my new torch finally arrived. Its a 3Watt "Luxeon" LED torch. But I am not sure if the LED is the real McCoy but then again, if it was, the price would not be that cheep (cheep). Anyway, I got this from a guy (neosaint99) via Lelong.com.my for RM80. (Actually, it cost more because my Mom went and gave the POSlaju guy a tip)

Having gained some experience from my Lightsaber project, a Luxeon LED, when it is driven straight on, can get quite hot pretty fast. So, fearing for the worst, I unscrewed the torch to test if my theory was right. Yep, the Luxeon LED is secured with only a metal disc, and also to the barrel which both acts as a heatsink. After playing with it for a few minutes, the torch felt a bit warm.

Luxeon LEDs have a very wide angle spread of light radiation and therefore, you need a collimating lens or a refector to focus the light. Still, its bright enough for my job. 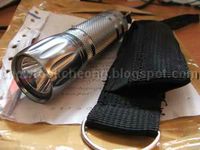 This is what I got today, the 3w LED MXDL torch and a holster 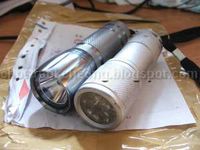 Side to side comparison with my old 9-LED White Torch 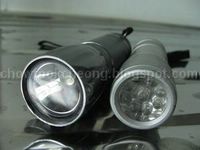 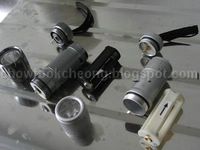 When disassembled, they looked almost the same, except the MXDL Torch has a slightly larger barrel 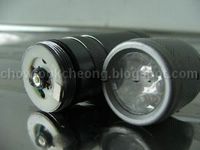 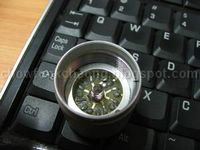 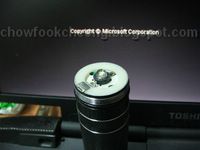 A closer look at the 3W MXDL LED 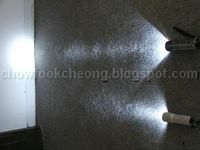 5 feet side by side test. The 3W MXDL Torch is brighter
My old torch only managed to make a "dim" spot (bottom left) 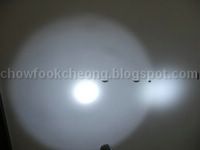 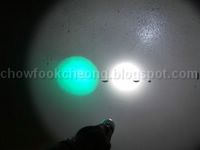 The MXDL torch against my 3W LUXEON Cyan lightsaber

Reference:
Lumileds website
The Luxeon III Emitter
Luxeon Collimator Lens
[Update 29.10.2005]
I saw one at ACE Hardeware in Ikano selling for RM166.90 but I am not sure if its 1Watt or a 3Watt version. I am guessing its a 1Watt because the packaging said its 10 times brighter than a LED (the brightest could be about 1 Lumen) since a 1Watt Luxeon gives about an average of 10 Lumens.

[Update 06.10.2005]
Just got more spare time today, and I managed to pry off the LED part. So, if I wanted to, I can replace the 3W LED with a true Luxeon just to put my mind at ease. But I prefer not to. Still, instead of using a colour filter, I can actually order a BLUE Luxeon or even a RED one if I am sick of the White. Then again, sometimes, its better just to keep my itchy hands in my pockets. 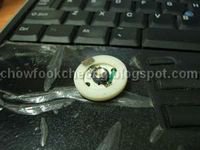 The 3W LED is soldered to a terminal under it.
The whole assembly is stuck to a piece of metal which acts as heatsink. 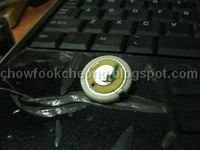 Once its overturned, you can see the fibreglass PCB.
*The metal heatsink is shown as the inner ring after the plastic piece at the edge
Date: Thursday, October 27, 2005 4 comments:

The Power of Blogs

Remember XiaXue's recent blog about disabled persons and their toilets? It made a lot of people angry and now, after a few letters from Peter Tan, Voxy has "dropped" their sponsorship, stating its only for three months. Good news or otherwise, that is how the World responded.

Its alright to have your own opinions but on the Internet where things spread like wildfire, it is a good idea not to upset a lot of people if you can help it. News travel fast and before you can sit down for your cup of tea, a lot of bad things would come back and hit you, ten times faster and maybe, even worse. What they say is true, "The bigger they are, the harder they fall". And sometimes, when it hits, it would not hit you directly but the ones close to you.

Being famous does not mean you can go back and still be what you are.

Reference:
The Blog which started it
The one which got affected
And the aftermath
Latest:Lost Endorsement