(... or screwing around with it, since it has so much screws inside)

With the Wife and girls away at her sister's today, I finally have the opportunity to take the toy apart without having to worry about them coming in and help me lose some parts in the process.

The Concept
First thing first. As you all know, the Tricorder did not get much screen time in the movie nor was there any close-ups to show how it works. So, I am taking a bit of artistic liberty here (or whatever terms that's in fashion now). We all know that this cigarette hold.... er, Tricorder is quite small and so, the toy reflects this design. And so, after a few days of tinkering about, I realised that the only solution is to use a microprocessor chip. This was because it offers a lot of advantages compared to the traditional 555 & 4017 ICs combo, which was:

The Assimilation
The next problem is power. As the toy is quite small, and also having a brief look at the pictures taken by another member, (thanks to propmaster2000!) my suspicions were true in the sense that there is very little space inside. So, I have to come up with a solution for the circuit to consume as little energy as possible. And so, I chose a small microprocessor chip which has a minimal operating voltage of less than three volts. This is also the same chip I used for a customised medical scanner. After poking about with the meter, I got lucky and discovered that there IS a way to power up the circuit using the Toy's 2xAA batteries without having to go into any complications. This was because when you open the flap, the LEDs in the Tricorder sort of goes into "Initialising" mode before it lets you start scanning. And so, after a few days of tinkering with the chip's programming, I got the timing and LED sequence(more or less) to also "Initialise" itself, just like the toy's original circuit. As an afterthought, I wanted to use the alternative solution of plugging in a VU Meter with a microphone input to the toys' speakers but oh, the amount of power it would use up! And also, it would be corny to see the screen activate only when there is sound......... 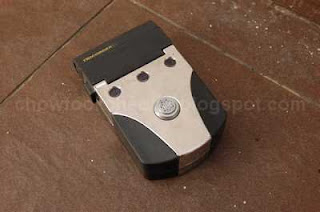 So, keeping my fingers crossed, I took up the
screwdriver and began to open the Tricorder 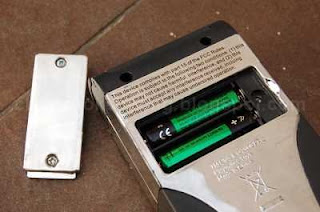 First, you must remove the battery compartment.
Actually, you do not need to because it would not
affect the toy in the next few steps. I jsut want to
show you that the screw on the bottom left is fake
and you only need to just remove only one screw. 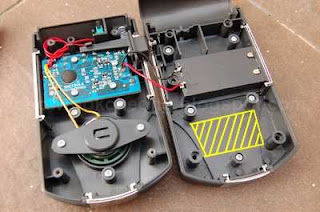 With the two halves exposed, you will notice that there
is very little space in there. Of course I could go to the
extreme and build the circuit using miniaturised surface
mount components and all but these are not cheap. OK,
look to the right and you will see a yellow 1" by 1.5" box.
This will be the proposed area for the circuit board. I'll
not put it under the screen and I will show you why. 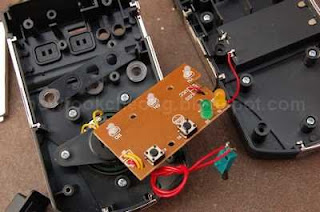 OK, I won't show you why in this picture (but the next)
but I want to highlight that Playmates were using too
much screws and parts in there. For example, they are
actualy screwing the plated parts to the toy. Then they
screwed the fragile paper resin circuit board to the toy.
And not only that, they did not mold the transparent
three LED lens into one single piece. Oh, and whatever
design they implemented on the Next Generation toy
Tricorder, its very apparent here, as in the case of the
speakers using a chamber to amplify the sounds. Nice. 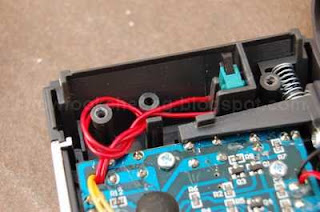 Coming back to the train of though, what I am showing
you here is the back of the display screen plate. So, if I
did put a circuit board in there, its going to be a very
small circuit board and also, there is a very high chance
that it will not fit into that space. 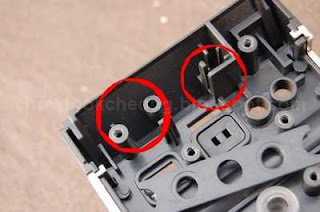 Which is not really much of a concern as I will try
to Dremel off the two columns on the left and see
what I can to with the area on the right. One way
would be to Dremel them off and glue the green
switch permanently on the remaining wall. It'll
have to be precise or else when I put it back,
it might not work properly. Trust me on this. 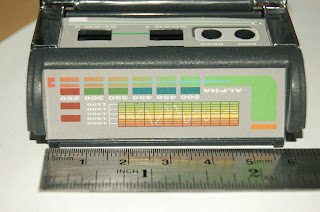 Finally, here is the photo of the label, in its original
format as I did not resize it nor did anything bad
with it. Ha ha ha ha!
The Video
Still with me? OK, I hope you all understand what I am trying to tell you but if you got lost, here are some important Life & Death facts :-

A) I cannot use miniature electronic components due to cost and since today is Sunday, no electronic shops would be open nor could I get a professional circuit board done in one hour .

B) I used dual-colour LEDs and so, they would cost a bomb if miniaturised. But they would/should solve my problem of putting everything under the Tricorder screen.

C) And those dual-colour LEDs are custom made. You'll see what I mean in the video.

D) Yes, I did do a video of the electronics. And here it is: