Just a short one about us going to Mid-Valley. Saw my old classmate coming out of the lift but he did not see me. Oh well, I don't feel like meeting him anyway. But the way he has his kids, I guess, he got married almost the same time as me. I know how he is doing after much reflection, I am nowhere near. Just hope he is there to save me one day. 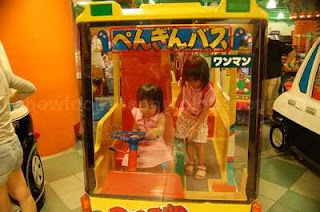 Kaelynn driving Kristine on a bus 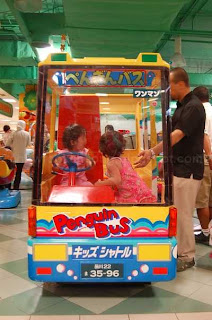 They had so much fun that some kid
also wanted to join in whether their
Daddy likes it or not. Since she could
not pay for the fare, she got taken
away by Daddy, screaming her lungs out. 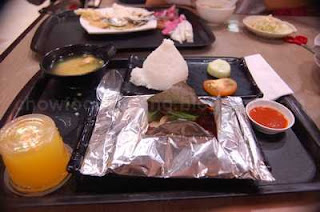 After months of not eating Teppanyaki at the foodcourt,
I remembered why I did not go there anymore. Nipple
rice that tasted more like damp glue and side veges
looked more like scraps from a chopping board.
But the fish and sambal still kicks ass, man.
Date: Sunday, November 09, 2008 No comments: Links to this post

Feeling the pressures of NGV

Ever since the petrol prices have started to go up in the late 90's I have already started to worry because at that time, I was in the service industry which translates to driving at an average of a minimum of 100Km a day. Now, at my current job, I am not so worried anymore. Even when the petrol prices raised to above RM2.45 and fell to RM2.15. Because, at this point, I am beyond worried. I am going crazy because of it.

At that time, the taxis were already using NGV and they're saving a lot. Although I should not look down at the taxi drivers who hog lanes, cuts into lanes without signaling, looked like old mean uncles and so on, they should be respected for their bravery at being the country's on-going guinea pigs on the road. Time and time again, they have proven how reliable some car brands were, how cheap it is to maintain the National Cars and even, how resourceful they are. They have been using the NGV for so long without any mishaps or problems, its become the answer to my own petrol problems.

That is, until the two newspaper reports. Here is the first, from TheStar:

KUALA LUMPUR: A man cheated death when an NGV gas cylinder in the booth of his car exploded at a petrol station in Taman Billion, Cheras, here.

The explosion occurred at 10.45pm on Sunday, when the owner of the car identified as Yong was filling up the cylinder.

''I was filling up the cylinder when I felt the car shaking badly. I immediately pulled out the hose,” the 45-year-old said, adding that seconds later, the car exploded.

It is learnt that he also had a cooking gas cylinder in the trunk.

And here is the "more meat" news report from The ChinaPress and the translated version: 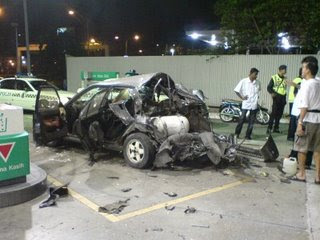 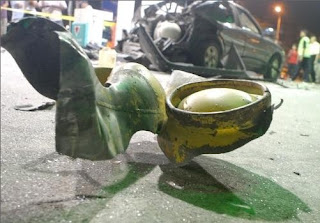 And from here. Surprise! Its a Shell Cooking Gas container!

And here is the YouTube informercial from some NGVcommunity

And today's news, from the New Straints Times this time, there is a fatality:


A trader died after his van exploded while he was filling up his modified NGV tank at the petrol station at Jalan Datuk Seri Md Zin Abd Ghani, Batu Berendam, here, on Friday night.

In the incident which occurred about 7.51pm, the dead victim, identified as Mohd Hilmi Ishak, 25, was in the midst of filling up his van, a Toyota Hiace, when the modified NGV tank exploded.

Mohd Hilmi is believed to have modified a cooking gas cylinder and turned it into the NGV storage tank for his vehicle.

Two other victims, Mohd Hilmi's brother Mohd Rosli, 30, and a friend identified as Razali Md Zin, 31, who were also in the van at the time of explosion, sustained serious injuries and are warded at the Malacca Hospital.

Jalan Kubu Fire and Rescue Services Department operations chief Commander Mokhtar Osman said initial investigations revealed that Mohd Hilmi was seated in the driver's seat of the van when the explosion occurred.
"Upon a close inspection at the van, we believe that Mohd Hilmi modified the cooking gas cylinder himself; it was converted into a NGV tank and placed under the driver's seat, covered with a piece of canvas.

Mohd Hilmi, who was still alive immediately after the explosion was rushed to the Malacca Hospital but died five hours later.

Mokhtar said investigations also revealed that Mohd Hilmi was driving his van with his brother and friend towards the Malacca Town, when they stopped to fill up the vehicle with NGV.

"Mohd Hilmi had attached the hose to the tank and the trio were waiting for the gas tank to fill up when the tank exploded and the whole van burst into flames. The modified cooking gas cylinder was shattered beyond recognition.

"The mishap is believed to have been triggered by the heat from the engine which had been kept running at the time of incident," he said.

Mokhtar said the Jalan Kubu Fire and Rescue Services Department received a distress call on the explosion about 8.11pm and a team of seven men on a fire engine was dispatched to the area immediately.

I'm not sure what the problem is but there are some personal observations:

1)NGV pressure is great, at about 3000PSI, compared to the normal cooking gas tank which is a hundred times less.

2) With all our Malaysian education and the "Tidak Apa" attitude, a lot of people thought they could save even further money when it comes to DIY on almost anything. So, here's the lesson of "Penny Wise Pounds Foolish": If you pur NGV into any cylniders (cooking gas tanks, acetlynes, etc.) other than a good NGV tank, you will die. If you do not die, your passengers will die. There is a reason why these tanks are so expensive, OK?

3) There will be other technology to help wean off our addiction to Petrol, but they will be cheaper if more people get them. Such as Hybrid cars, electric cars, bio-fuel, water, LPG and so on. And if you notice, the higher the petrol price increases, the more your ROI finishes. Hee hee hee hee.

Lastly, if you need to know how NGV is, try going here