A little girl & her Strawberry 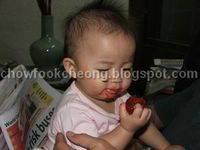 After choosing which strawberry is better, Kristine really goes for it 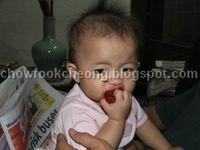 Its so delicious, I don't care if I have teeth or not 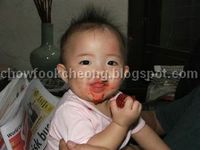 Yum-yum!
(Yeah, we had to change her clothes afterwards)
Date: Wednesday, September 07, 2005 1 comment: Links to this post

How to stick a Road Tax

Why they did this was because a few naughty people decided to swap their road tax in their cars. So, the new sticker is to prevent them from having a good time. Yeah, right. If I got a torn sticker, all I have to do is show it to the people at the Post Office, pay RM50 and I have a new sticker again.

Removing them from the windshield every year is a pain in the butt. I mean, when you leave your car under the Sun, you can be pretty sure that the glue in the sticker would act more than just glue. Therefore, peeling that hardened sticker (which breaks to pieces) is only adviseable when you are really in a very very good mood.

I came across this idea years ago when I was tinting my car. What I did was to stick the sticker (heh) to the tinted film and then stick them to the windshield. When its time to remove it, I just peel the tinted film and the whole thing comes off easily without any fuss. It has to be tinted film (not too dark) because of its hardness. If you decide to use those soft plastics, you will have a lot of bubbles in the sticker and it might not even stick properly.

Getting a small portion of tinted film is not that difficult. Just go to any car accessory shop and ask POLITELY. They usually have a bit left after tinting a car. If not, make sure the shop you go to, belongs to your friend whom you helped support generously enough for them to buy a house/castle. 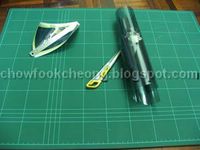 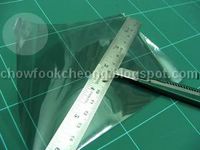 Cut the tint film (slightly larger than the road tax) to size
Note the circled area, where I split the film from its backing transparent plastic so I can tell which side is which 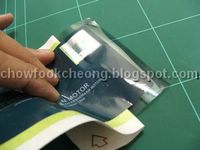 Peel the road tax and stick to the tinted film. Make sure its on the tinted side, and not the transparent plastic or else it will be a horrible experience for you 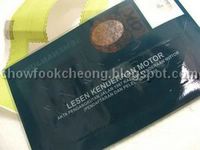 Then using a sharp knife, cut off the excess film but leave about 1mm border
So that next year, you will remember there is a tint film there and not scratch the windshield 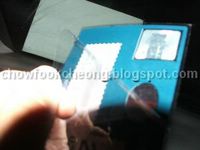 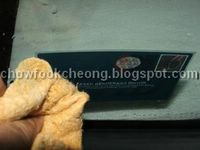 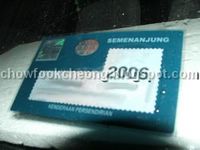 Ta-daaa! All done and Wifey will love you

When I am in a weird mood, some things really stood out. Take for example, when I was paying for petrol at Rawang yesterday. Do you know why there are so many cutesy things at the counter? This is because when you are there to pay for your items, you have to wait.

So, when you wait, you will get bored.

So, when you get bored, your eyes will wander

So, when it did, the first this they would look at would be the nearest things at the counter. That is why, a lot of nice things are displayed at the counter, ranging from:

1) Sweets (so that Kids would have second chance to psycho you to buy them)
2) Condoms (Well, people do think twice, don't they?)
3) Cigarettes (Apart from theft, once you have done your stuff, why not have a smoke?)
4) Batteries (In case your walkman/stuff ran out of juice while waiting. Yeah, right)
5) Cigarette Lighters (I'm coming to that)
6) Other stuff

So, psychlogically, while waiting, you would take whatever stuff you eyes fancies and examinie them, and for all reasons unknown, you'd think they're cheap too. Buying stuff you would not normally buy. Its a Deathtrap, I tell you.

Anyway, I got suckered into looking at the cigarette lighters. Long ago, you would have this long rectangular disposable lighter selling for RM1.00. Those lighters which you use your thumb to roll the wheel (to generate the sparks) and then release the gas (for a nice fireball effect). And they come in transparent coulours. Throughout the years, its the same lighter but with different variations. Then the piezo version came out, which you just press the switch down, hear a click and instant fire!

OK, back to the story.

So, it was during the wait that I spied on this new design. Although the lighter is smaller in size (less gas) but they made up for it with, wait for it, a LED torchlight! Ha ha ha ha ha!

They have green, blue, red, and orange, each with their own coloured LED. But no white, which would be cool. Anyway, for RM2.00, I bought one. 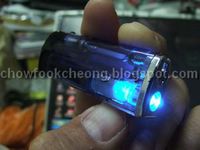 This one is blue
Date: Wednesday, September 07, 2005 No comments: Links to this post