That's it, man! I have had enough of this crap. When its repaired, it supposed to be OK. But not like this. The phone hangs when I make a call, receive a call and so on. And today, it really takes the cake. It rebooted itself and then asks me to enter the Date and Time, as if its pretending to be a 3xxx series Nokia phone. Not only that, using the Garmin XT software, it kicks me out every few seconds and I have to go in again and again. With the voice option, things got worse. And I can't even synchronise the phone. 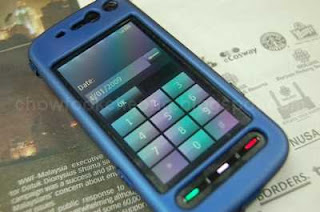 [Update: 17042009]
In frustration, I took out the 8GB microSD memory card and then reinserted and rebooted it again. Also, I told the phone to scan itself and the memory card for whatever reasons I could not explain. But apparently, either one of the step worked because all of a sudden, the interface became faster, and then menu really pops up and all, a sure sign of the actual V20 firmware working in there. And on the way home, the Garmin XT did not even kick me out, even when the voice option was on. It did hang when my Boss called while I was entering details on the Phonebook, though. Still, I have to give it a week before I decide if I want to send it to the Nokia Service centre again or not.

If the phone does not hang, then this is the problem because thinking back, most of the data was stored when my old 5800 was using the v8 firmware. And maybe, just by scanning it, it went to v20 format? Bear in mind though, there is no software (or so I think) for defragmenting or repairing memories for the Nokia 5800. Whatever it is, I just hope this was the cause.
Date: Tuesday, April 14, 2009 No comments:

While we were looking for the stickers, I found this toy gun which almost looked like one of those Blade Runner blasters. And so, I bought two (( wanted to buy all but since my salary is still not out yet, I have to contend with two and forgo a few day's meal. Really. Luckily, I bought packs of those oatmeal drinks two weeks ago.......) 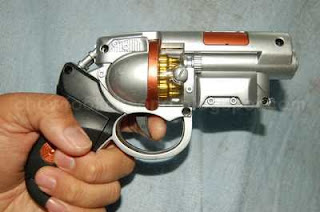 In my hands, its quite small. In fact, you can call
it an oversized Derringer. For Blade Runner fans,
this is not accurate but just generally, looks like
one or a variation of it. 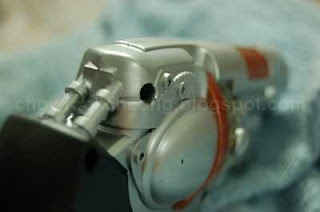 Why they put a pair of hydraulics, I have no idea.
Self loading/cocking sliders? 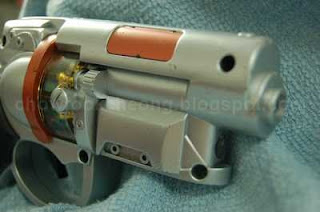 You can feel the plastic is quite cheap and the gun
is just painted silver over dark plastic. 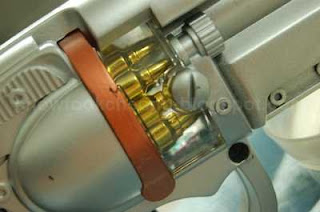 There are a lot of bullets, yes, me sirree! One pull of
the trigger would play the sound of a shot plus that
of the bullet richocheting or something. Press the
trigger longer and you have a machine gun effect.
I am nut sure of this was done intentionally but in
automatic mode, you can feel the gun vibrating. 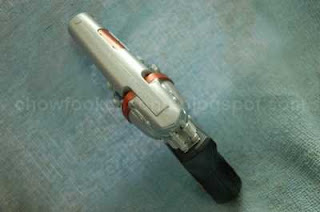 A view from the top, the gun looks quite OK 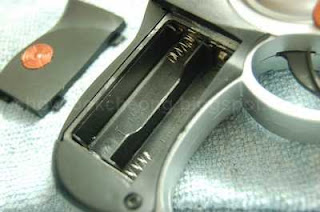 And best of all, it just takes in two AA-sized
batteries, which is fine by me. 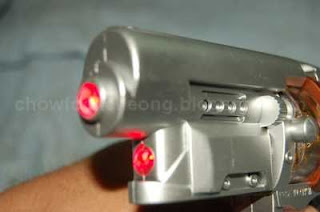 Two red bulbs at the barrel, and yes, you can modify
the bottom barrel with a red laser if you want. 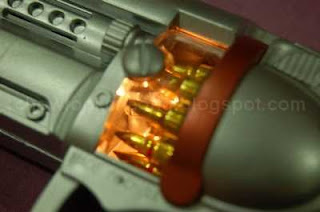 And there is another bulb in there too. The bullets
are just a one piece molding which they just push
it into the motor to make it spin. 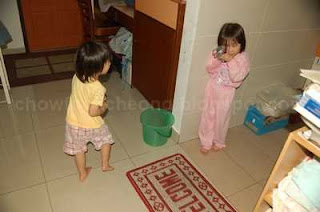 And so, I gave the girls one each and they went
crazy with it. First, they shot each other. 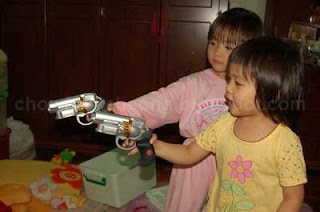 Then they gang up and shot their clothes 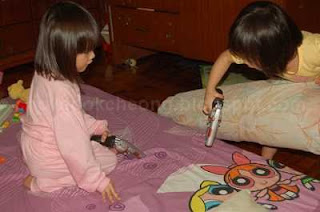 The Powerpuff girls were their next victim 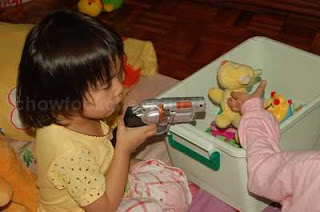 And poor old Doggy too 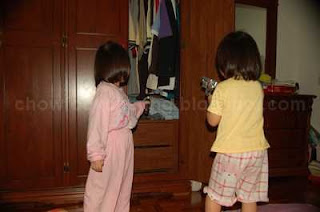 Here, they are making sure there are no monsters in
there. And they completely vaporised my socks too. 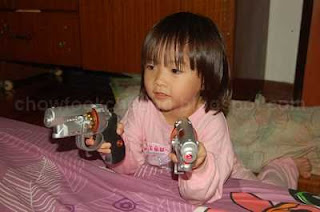 The famous two-gun Hero grip......
[Update: 16042009]
Both guns are scratched with one of them having a broken grip. Kaelynn got adventurous and tore the plastic out from the screws. And Kristine hid the missing part in case I got angry....
Date: Tuesday, April 14, 2009 No comments: