After asking almost every night, I gave in. Kristine has a software CD which teaches her how to count from 1-100 and recognising the alphabets. Because the other PCs in the house are either going nuts or have no speakers, I relented and let her install the CD into my Notebook. And after looking at it, the software almost the same as the one she was using in school. The same software which took me ages to look for. Even Uncle Ho does not have it.

And so, with some training from her school, I let her navigate around based on her own experience. And boy, she took it like duck to water! We have not seen the number segment yet but at the alphabets segment, it teaches her how to spell them, pronounce them and even let her paint pictures related from each alphabet. 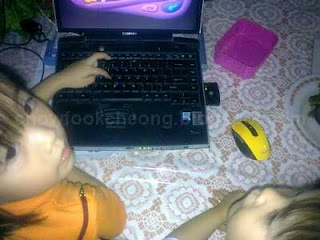 Kristine and Kaelynn looking at the software for the first time.
The picture looked weird because they're both sitting on my lap 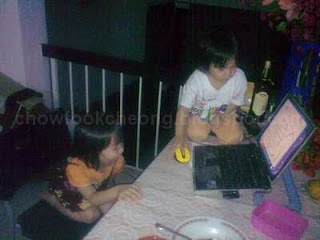 Then, I left them to their own devices but I was worried about
Kaelynn who kept touching the LCD screen which has grown
fragile after so many years. 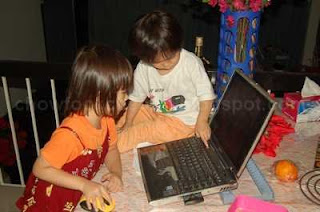 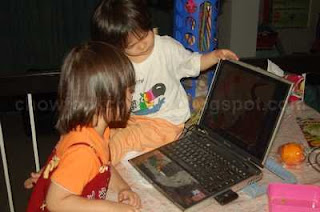 There she goes again, with the screen. 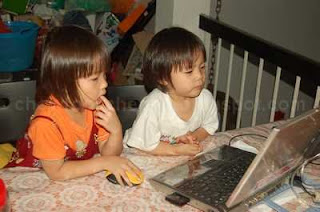 Note that by now, both of them were so engrossed with the program
that my camera falshes does not bother them anymore. I can see
Kristine concentrating hard because she starts to put her finger in her
mouth. 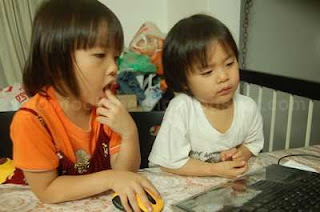 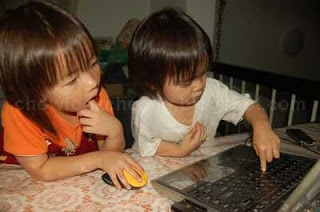 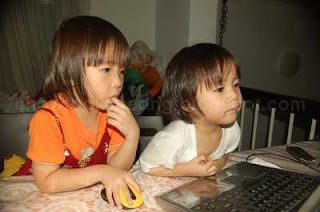 And deeper. Finally, I had to stop theboth of them as it was very
near to midnight already. Soon, they can play with this Notebook
as much as they want. Soon.
Date: Wednesday, February 04, 2009 No comments: Links to this post

Finally, the remote gets repaired. I wanted to do this on the last day of the long holidays but I miscalculated today as being a Public Holiday instead of a State Holiday (which means I have to work, la) the window of opportunity is gone. Luckily, since today is the start our the "Start Work" day of the New Year, we get to loaf around in the office (but minus the bread). Quickly, I took everything out to start the repairing in case customers starts to call us for service.....

Let me recap about the remote. A few weeks ago, during a flare up incident in the office, the remote in question experienced a sudden deceleration in access of 3G after a performing a downward motion. This resulted in the leaving of a PN junction device from the main unit in an unknown trajectory. 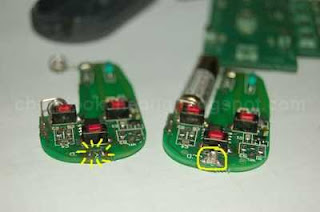 I am using a green LED to replace the original lost red LED. For such a
circuit, I am not going to worry myself over the resistor ratings as the
tow LEDs consume different current. But if the green LED fails due to
this, then I am done for as the remote will not work as it acts as a fuse. 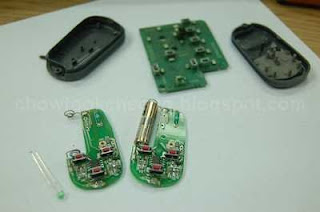 On the left is the spoilt remote with the replacement green LED.
Remember the top circuit? I decided not to give it to Kristine and
kept it as spare parts. This time, a switch will be used for to replace
the one in the remote. But after soldering it on, I found out that
its too sensitive. When I have the time, I will try to lower the PCB
board instead of fuddling with the switches. The copper tracks on
the PCB can only stand to so much heat before it fails and delaminate. 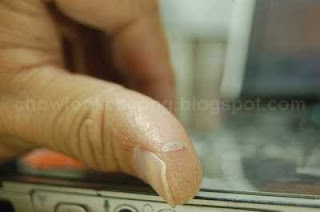 I wanted to show you the completed remote but this one is better.
As I was desoldering the switch, the soldering iron tip slipped and
went to my thumb. This is the effect of a 1second burn. Really.
Date: Wednesday, February 04, 2009 No comments: Links to this post