When I arrived from Kuching last night, it was already after 7pm. So, I have no choice but to stay a night at the Hotel. One good thing was, at the airport, when I was getting a taxi, I did asked them if there were any Hotels nearby my customer's place. So, the taxi driver took me to the Hotel which is just right behind my customer. One thing I can say about Sibu town is that the main streets were quite clean and a there were not much cars. After my dinner at SugarBuns, only did I manage to walk further into the town. There was a Pasar Malam going on and most of the stuff there were not usually found in KL. Some of the stalls were very convincing. For example, they will leave a watch inside a tupperware full of water and the price tag of RM15. I nearly bought one since it was quite cheap. The main difference is this Pasar Malam was that most of the stalls catered to drinks (usually Soya Bean) and fried foods. I bought three flashing trinkets for RM2 (and I left behind two in the Hotel) where other places would be selling for RM4.90.
This morning, before going over to see my customer, I took a walk around the town again. And it was a stark contrast to the night life. The place was full of people going about their business. Before I visited my customer, I decided to pay a visit to a "well known" company who used to be a Major Dealer (in Sarawak) with my ex-company. After wasting precious time looking for the right person, the whole experience left me with a bitter taste in the mouth.

We had to rely on oustation Dealers who can arrive at our customer's doorstep first. But due to their reputation, especially where monies are concerned, we decided not to engaged them. I made this decision after I had the chance to observe how their Technical Manager tried to diagnose a simple Keyphone. Its like asking a Proton mechanic to repair your Mercedes.

After my tasks in Sibu was completed, it was time to go to the next destination. Since my flight was at 1550, I had already checked-in by 1330. However, after a long wait, the 1550 Fokker 50 flight was delayed to 1615 and eventually to 1635. This shattered my chances to trying to catch the evening flight to Miri. So, I had to stay the night in Bintulu, which means more expenses. 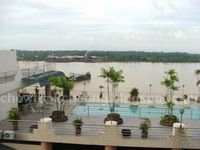 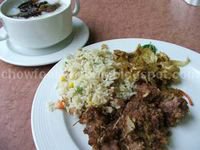 Something new for breakfast, fried corned beef which is good
The Kuey Teow and Fried Rice was good too because it tasted so different 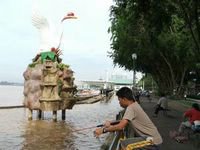 A lot of people were fishing by the river 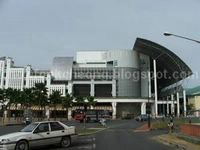 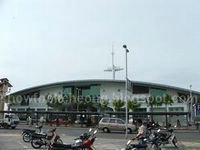 And this is an equivalent of Airport for ferries.
I just forgot the term for it. 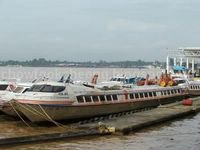 And these are some of the ferries 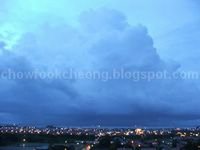 This is the evening view from Hotel Li Hua in Bintulu
After the rain, I went out to look for dinner 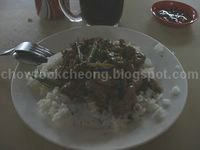 Rice with sitr fried pork and a can of Coke for RM4.00 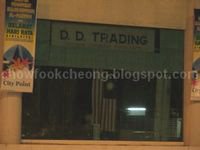 What were you thinking?

You would know this feeling.

In your Boss's party, you really had to go to the toilet to take a dump. Tonight is the night where he will announce the staff's promotion, particularly, yours. In the toilet, the flush did not work. You tried pulling the handle again and again. After one last pull, all the dirty stuff went away. So, you turned around, straightened yourself, ready to walk out of the door. And there was this strange gurgling sound........

You turned around and looked straight into the toilet bowl. Suddenly, all the dirty stuff you flushed away shot out and landed straight into your white shirt which you borrowed earlier from one of your Manager. And worst of all, the toilet is starting to flood with sewage. So, you quickly decided that its best to sneak away out of the toilet and away from the party.

I was at my customer's place, all sweaty and a bit messed up (as I was climbing amongst the cobwebs). When she walked in the front door. The only word I can utter was, in my jaw-dropping composure, "You were on kennysia....". To cut the long story short, she was there with another ex-colleague of mine (small World) and we took a photo. Then the situation embarassingly shifted to "catching-up" conversation between my ex-colleague and myself, leaving her alone. Later on, we tried calling Kenny but he was out of town, unfortunately. And since I was rushing to complete my Sarawak Amazing Race tasks, I had to bid "Julie" farewell. The Manager there was kind enough to get one of his man to drive me to town. Then I realised I could have had lunch with them as I was hours too early for the plane to Sibu. 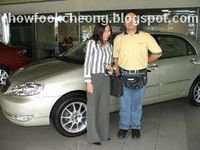 It was an ackward pose for the both of us
I was hiding my tools and camera pouch behind my back
Yes, I got fat again.

OK, here is my trip in detail (Ha ha) 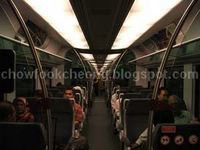 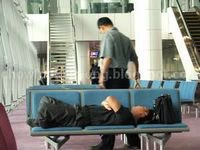 These two guys went to sleep while the rest of the passengers were already entering the plane. The stewardess had wake them up (short of kicking them in the balls) 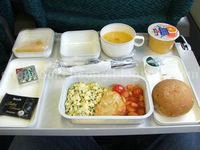 This is my in-flight meal/breakfast 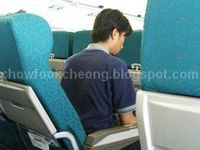 His wife passed him the plastic tray and he kept both of them in his bag!!! 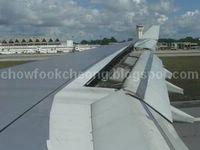 There is a reason why I don't like window views of the wings. The wings of the 330 flexed a lot and you do not know if thye're going to break off or just flex some more. And this is the part I do not like: The opening of the flaps to create a big air brake during landing. Yeah, your body sort of lunged forward while you're trying to pull yourself back to the seat. In the end, you sort of end up sitting in the middle like someone with a back problem. 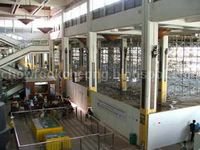 Kuching Airport undergoing renovations with lots of loud thundering noises. Even the Customs lady had tissue paper stuffed into her ears 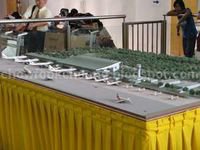 This is the model showing how it will turn out, except for the model toy plane (with wind-up springs) which is not in scale 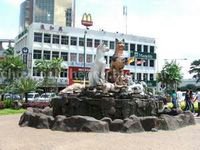 Kuching is the City where cats rule.
But after my Marriage, there are other cats I like 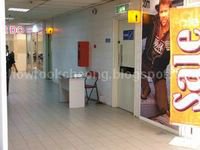 While the ladies were busy chatting below, I decided to relief myself for free 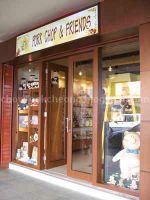 This shop sells everything related to Pigs 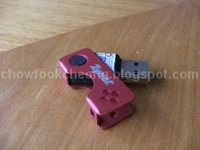 I got this 512MB USB2.0 thumbdrive from a corner computer shop near the escalators, opposite the Alan Salon inside RiverFront Shopping Complex. Yeah, I got suckered by the piece of red aluminum. Oh, and its Blue LED lights up when plugged in. 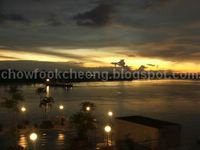 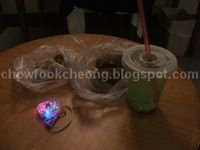 After some searching around, I bumped into Sibu's Night Market and got myself some snacks.
(L-R) Siew Mai, some blinking trinket, deepfried something and barley/pandan water.
Date: Thursday, November 10, 2005 2 comments: Links to this post