Arias CD (or Local CD to you and me)

So, we're at the Popular Bookstore to look for the story book that Kristine lost. And while we're all separated, looking at things I was distracted by the songs being played there.To cut a long story short. It was the Arias CD which was being sold for RM54.90. As they're having a pre-renovation sale, it was priced at RM39.90 for three discs.

That's the problem with having a book shop with a music section in there. They played the song in low comforting volume that it was so nice. Yeah, I bought it and I just remembered, it was the first commercial legal CD (pirated DVDs do not count) I have bought since 2003. The reason why I stopped was because of the stupid Fat Cats harping about copyrights and Madonna being her usual self, making us potential/existing customers feel as if they're criminals.

Anyway, since I bought it, I have no choice but to enjoy it anyway (ha ha). And I must say, some of the songs in there are really really good. But if you plonk it to a CD player which displays the track titles, there are sone errors, as shown on my Media Player. For example, Track 10 on Disc two is Canon in D by Johann Pachebel, it just reads anon in D. Worse is Disc One's Il Mio Miracolo by Vittorio Grigolo which just displays as Track 7 or misspelled Angels as Angles. And when it came to the third disc, sigh. I can go on and on. I guessed I should have seen the CD-RAMA logo before making a decision. Or at least try to remember if LiteFM is a local radio or what. Because this CD pack sounds so obvious of local made. And yet, even after giving them a second chance, they still cannot get anything right. RM54.90 is a lot of money and this is the quality we get when we want to buy music legally? Fuck it, man. Universal is a big label and now its making me take second guesses whenever I want to make a decision. Maybe I should have stuck back to Uncle Ho with his pleasant customer services and reasonable prices. The discs scream, "Gold Celebration Edition" and, "As heard on LiteFM". Sheesh. Who the fuck cares after getting this CD full of title and spelling mistakes.

But you should listen to The Mass (Era), Ameno (Era), El Condor Pasa (The Vienna Boys's Choir), Moon River (Emi Fujita), Romance (Peper Romero), Vincent (Chloe Agnew) and so much more. At least the monkey who cut & paste these songs from other New Age albums is doing his job. However, quality of some of the songs were a bit disappointing. Whatever DSD technology is, its making some high notes sound distorted. But the overall feeling? Yeah, I've been had, hook, line and sinker. And I am disappointed.

Its like following they hype on the arrival of the new Proton Persona only to see a Gen2 with a bigger boot space. 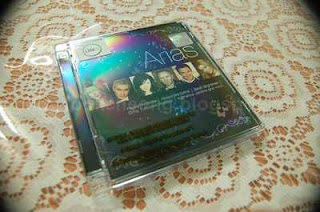 Is it me or are everyone starting to use these new CD jewel
Boxes? I am so outdated now. 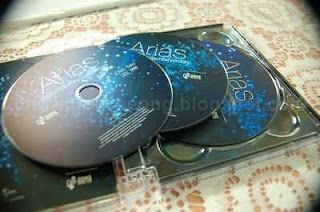 Whatever it is, the jewel boxes make these three CDs
special. Next to it is a small booklet full with lyrics
and bitsof info about easch song. If you're in the
mood, you can sing along with it too.

Email ThisBlogThis!Share to TwitterShare to FacebookShare to Pinterest
Labels: Songs

We're to install a door access system for an IT department. Its to make sure only authorised personnel are allowed into the servers and all. I have inspected the site the day before, and it should be a no brainer except for a few minor issues.

By the time I got the crew ready, it was already mid-morning. I want to drum it to their heads to make sure every tool is ready and also the possible ports to be used. There is no point going back to the office or do a follow-up because of it. It would be a waste of time and also displays their lack of efficiency.

After a lot of security clearances, we could start our work. First of all, I explained (again) to my crew how the cables are to be laid. Then, the next step would be to install the system itself followed by the necessary wall drillings for the keypad access and switches. Then the last step, which is most time consuming, would be the installation of the door access unit which must be precisely mounted so as to "catch" the door and hold it all the time.

We worked until almost three where we stopped for a quick lunch break before continuining the remaining tasks which is to connect everything and make it run. As for me, I could almost do nothing once the supervison job is done. All I can do is to sit back and watch them go at it, with the occasional drawings or sketches to keep my mind occupied. OK, the real reason why they kept me away was because I was either obstructing them or doing it too slow. Ha ha ha ha.

Anyway, by the time we finished and i got home, it was already half-past six where wife wanted me to drive her to the City to look for some books which Kristine vandalised. 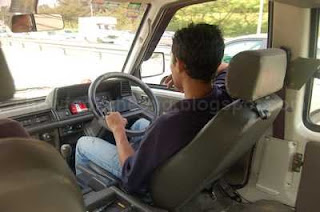 I noticed that my tech's driving position is very close to the
steering clumn, almost hugging it. And his gear changes, ah
its worse than me. But since I am taking the back seat the
whole day, I just have to sit back, observe and shut up 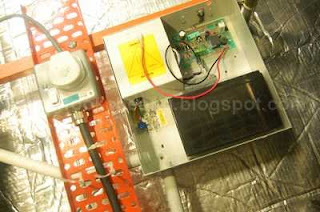 This is not a time bomb but the power supply for the door
access system. We bolted the casing to the orange bar (top)
and used the PVC pipe (tied by tie-cables) to strengthen
the whole thing since the battery (black) might sag the
box. Yeah, the IT guys do not want it touching the floor 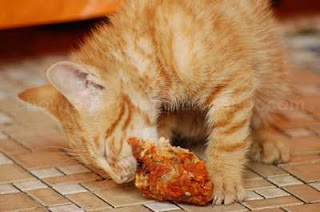 This tiny kitten, coaxed out of hiding by my tech was not
so cute once it attacked my friend chicken. There was
something harmless yet dangerous when it started to eat. 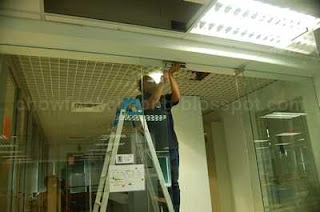 After the break, we started to patch things up quickly.
My tech was mixing the plaster on the spot (But I am
not going to show you that photo in case one day, I
would be at your place) 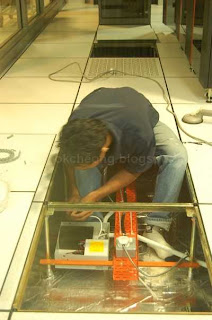 And the other was left to wire things up 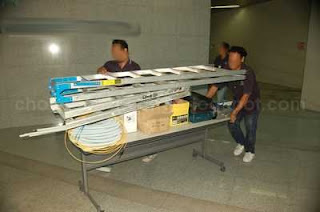 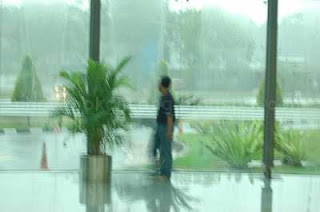 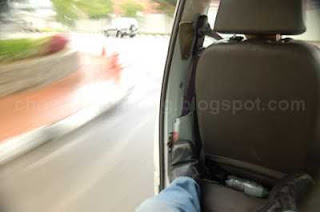 After waiting for quite a bit, the rain slowed to a trickle
and we were on our way home. I was worried because
one of my tech using his bike as he joined us after he
has finished his service calls nearby.
I tried to fantasize how it felt to be riding a helicopter
during the Vietnam war as a door gunner. Nah, it fails
Date: Sunday, October 12, 2008 No comments: Links to this post