One thing I like to highlight about having Nexus with me is that there was never a dull moment. And not only that, with his excess midichlorian count, everything was smooth sailing, except for the parts where I need to work while he sits around.

OK, remember the part about the sleeping contractor in the previous post? Turned out that he was the cabling contractor which I was waiting the whole night for. I had called the Main-contractor who said this guy has gone out for dinner and should be back soon. Little did I know that he would come back at 11 at night only to sleep. While I was working on the system, he did come in, saw me and went about his things. In the morning, when he was introduced to me, he said, being arrogant and all "Oh, you're the phone guy. Well, you should have told me last night". I bit my tongue because, in this kind of line, every contractor knows who are doing what and if not, they would ask, as I was asked by other contractors the whole two days. And I was polite in answering them and offer any help if I could. This is because everyone is working there and the sooner they finish, the faster they get their monies and there are no time for anything else. Anyway, after explaining for the last time, I told him that I needed an extra 10-pair cable from the Telekom riser to the PABX, nevermind if the specs said otherwise because I am not going to argue with their consultant in KL on a weekend. Siply put, I told everyone concerned, that, "If I don't get these cables on time on Saturday, the PABX won't have lines come Monday morning because I will not be ehre on Sunday. Please do as I ask and settle your problems later. I am the expert here. Now." And so, within less than an hour, it was ready.

Anyway there was more trouble with the cable guy as well. We found out that the ultra expensive surge protectors to protect the data and PABX equipment was stolen. So, after letting him discuss with the main contractor, they both came to me for a solution. You should see the look on his eyes when I told him that, "Normally, on average, these items costs about RM30,000" [So the real price is not that much but its very close]. Now, the fun begins.

Instead of being Gentlemen, the small-time-not-going-anywhere sub-con was trying to wriggle his way out withlame excuses and finger-pointing. these are the main points which came out from the argument where I was the mediator of sorts because no one else want to be a part of it. My answers to them are in italics:

2) The sub-con refused to pay since he only signed the last page of the Delivery Order and not the first two and this is the standard procedure by the main-con too, who also signs on everypage.
Really? See the document again, it says page three of three, etc. And see this item on the last page you signed? This is the most expensive part of all.

3) The two claimed that when the delivery was beind made, the surge protector company should have told them how much it costs and they would have taken better care of it instead of chucking it to one side.
It does not matter if its cheap or expensive, big or small. Bottom line is, once you signed and took delivery, you have to take good care of it and not chuck it to one side as you have already admitted. Where I work in Kuala Lumpur, its called resposibility. And since the cable guy is parked under the big guy, both parties are in deep doo-doo.

4) The cable guy also said the surge protector company is trying to screw him since they only gave him two boxes.
Here, let me go through the items in the D.O. with you. See? All these items are in the two boxes, OK?

5) The surge protector will make a new set but it will wake days and they want cash or post-dated cheque.
Yeah, I know, I spoke to them just now. They do not like it either because this is the first time it happened and this speaks volume of trust and responsibility. Whoever was in charge of this "project schedule" would have known better than to take these "easy to lose" items earlier on. They should be been delivered when we are setting up the PABX at least a few days before the D-Day and not during the early stages of the construction.

6) How are going to solve this? The sub-con's storage room was broken into and all his things were stolen. Right now, I am going to get the security guards to check every car that comes in and out.
This is your first project with this company right? Nevermind, you'll learn as you go along. As for the guards, they are very important on construction sites but I think its a bit too late now since the customer is going to open on Monday.

Then the next problem is that the cable guy after buying what I needed (since everything is now coming out of his pocket), he promised to lay the cable and help with the termination on both ends, but disapeared for lunch and was never seen again until hours later. To the detriment of the cleaners, I took their ladder and finished the work while everyone was out for lunch. Then another bombshell was that the new telephone lines were not "registered" with Telekom and we all had to wait hours before I can use the confirmed phone line numbers for the PABX, Fax, Credit cards and so on. By the time we settled all these and I get to continue my work, it was very late in the evening which means we could not go explore Ipoh. And the sub-con seeing me as being the no-nonsense guy and doing all the work, he spoke to me nicely and with respect in the end, and even asked me for my card. Which I complied. Maybe he wants to send some gang to beat me up in my offce. Anyway, once again, I had to kick Nexus away from all this, not that he is in the way but when one starts to rename and archive their MP3 collection and watching Stargate episodes........... Ha ha ha ha. Yeah, he is bored but now he gets to see the jobs I did. But we did wished my Senior Tech was here so he could do all the work while Nexus and I painted the whole City red. Ha ha ha ha ha!

Anwyay, by the time we reached Subang, it was way past on in the morning. Time to go home and sleep for days (years/millenia, etc.)

One thing I noticed about the car we drove, is that the fuel consumption is quite reasonable but I have to test more and not only that, the suspensions only gives problems when there are more than a single person in the car. Anway, if my Boss keeps on insisting me to take this car, I would like a few things done first:

1) Sports suspension.
Hey, I am sacrificing my Bengmobile, OK?

2) A cheep cheep MP3 player, maybe with DVD capability.
So I can have more than 900 MP3 songs. Bwhaahahahaha!

3) Redo all the window controls.
I dont want to worry about not closing the rear window at 110 Km/h when I accidentally press it. 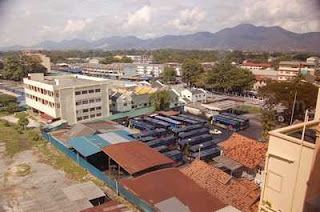 I was woken up by the horniness of the buses very early in the
morning but slept again as I only got to bed at about 4Am after
my much needed shower. OK, so I had to check my E-mails and
spams too. Ha ha ha ha 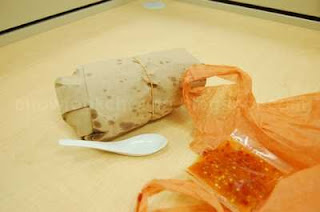 While I was working, I had to literally get Nexus out of the
place because I think he was seriously bored already. So he
drive the car around town and came back with a RM7.00
chicken rice. First time I have every seen rive packed like
that. Oh, and he got me extra chilies too. 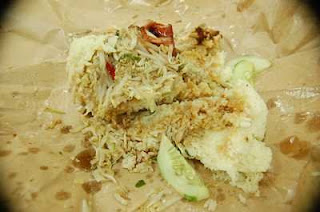 When I opened the pack, it was delicious! And with the extra rice,
and those nice sauces, it was heaven! So, what I had in there was
chicken, char-siew, ngar-choi and more rice. Delicious especially
eaten with hand too. 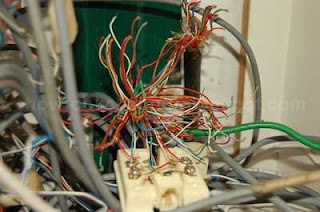 The customer wanted me to go back to the old site to reconnect
their main line to a telephone so that they can get one person to
sit there, and anwer the calls to redirect the customers to the new
place. Right. And you want me to do this after I have cut all the
wires and because Telekom told you that cannot do the call
forwarding until Monday afternoon. In the end, I told him it
would take hours which I do not have since I need to get the
PABX up and running before I leave in the evening. 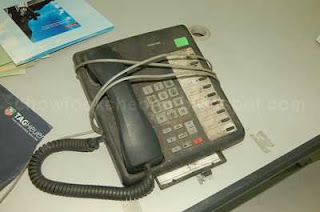 One of the phones salvaged from the old place which was used
by the mechanics and left out in the element. I told him it can
be used one you give it some TLC cleaning. Ha ha ha ha! 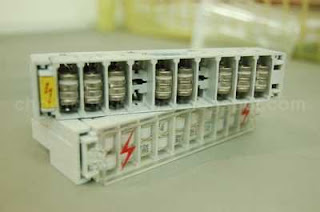 The old lightning arrestor (top) and the new. I sent the arrogant
cable guy out to buy it along with the tags which I needed and he
ran all over the place to find them. Unfortunately, he only got the
arrestors and luckily, I salvaged the old tags from the old site. 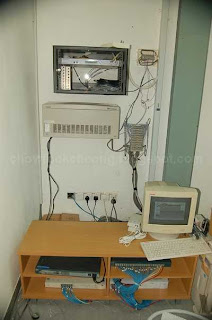 All done! See the computer serve cabinet at the top?
I tripped on the desk below after going in and out too
many times. Luckily, after washing all the blood away,
my lips sealed the wound very fast.

By 2200, everything was up and running. And because of so many delays, I did not get the chance to explore Ipoh with Nexus nor buy any stuff. Nexus did go out in the evening but most of the shops
were closed and could not find dinner and almost lost his way back The shop selling salted chicken was closed too and this is more than a year since I wanted one. I wanted to rush over to get his some crispy pork skins but it would be closed by now too. Oh well.
Oh, and I have discovered a latent ability: I can talk people to sleep and not just my Boss!
Date: Sunday, October 19, 2008 No comments: Links to this post