Ha ha ha. I just went through TV Smith's latest Blog as its so funny. 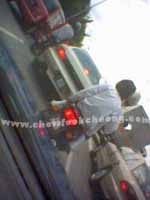 This is so dangerous; riding without a helmet

How is your driving? Tv Smith Dua Sen

Slurpee and the Tudung Girl

So, after finishing the last call, I was ready to head back to the office for a meeting. Seeing the 7-11 shop was still open (Ha ha ha) I decided to go for a cool drink. I was stuck between the Pepsi Twist and the Lipton Ice Lemon Tea until the monitor screen at the counter screamed (Advertising for Slurpee)

So, I decided to go for a large Slurpee, something which I have never drank since 2002. Remembring the "Brainfreeze" syndrome like in the advertisement, I took it in sips (Ok, I wanted that cup of ice to last until I reach the office). You see, its actually green fizzy syrup mixed with shaved ice and when I drank too fast, I get a headache. Funnily enough, I did not expericence any Brainfreeze as I can still count from one to... to... erm.....

anyway, on my way back, I was using the Federal Highway. One thing about this Highway (Ol' Faithful) is that although it is the oldest, being stuck in the jam there still guarantess that your are still moving. And best of all, the traffic jams can easily start and disappear for no reason at all. All it took was just a drop of rain. And like any Highways, there are Emergency Lanes.

The lanes are actually for those who have terrible car repair skills to stop their cars and examine what boo-boo they have done. But there are some who, in their most efficient thinking, assumes that lane as the short-cut out of the jam. (Better known as the zoom-zoom or express lane). So, there was this young girl driving a Kancil who thinks that everyone driving at 60kmh on the left lane were just too slow. Although Kancils are small cars, this does not mean you can squeeze into tight spaces just because you thought you can.

And this girl just did that, which in the sense, nearly desulted in denting my rear. And since I have time on my hands, I decided to play along. I just moved my car slightly closer to the Emergency lane and all I have to do next was to match her speed. What happened next was really really stupid:

1) There were enough space for her to just pass me by but she decided it was more fun to flatten the grass at the side and also scare the other bus passengers. While matching my speed too.

2) Since I was at the left lane, she could have gone back into the lane and use the right lane to overtake me. But maybe she was afraid she might scare her passenger if she went over 61kmh (Speed limit was 80kmh)

Maybe it was the sugar in the Slurpee or the effects of the Brainfreeze but that afternoon was quite fun for me. And these are the "people" who procalims they are the true "Prince of the Earth" and everyone shold respect them because of who they are. Sheesh. 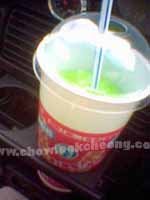 The green goop of Freeze