While I was busy the night before (sleeping), I heard a scream followed but Kaelynn's crying. Since my Mom rushed over and calmed things down, I did not think much about it. But it was later in the night, that my Wife told me that Kaelynn had burnt her hand on the iron which was left to cool down. We have told the girls time and time again, but somehow, this time, Kaelynn did not heed the warning.

Day by day, she is like me. And what is more frightening is, I got my hands burnt by the iron when I was around her age too. And if she is more like me, then, I also did remember having my legs stitched because I stepped on broken glass in the bathroom......... 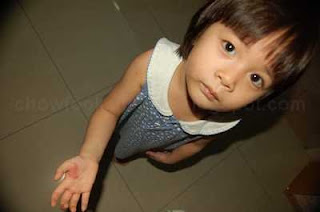 Kaelynn showing her burnt hand.
The way she looks at you, you cannot helk but feel pity. 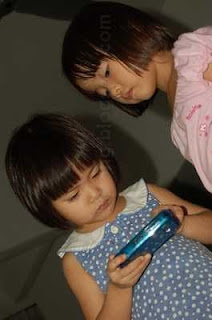 For the rest of the week, I decided to go
easy on her. I mean, just last week, she
had high fever, followed by small weird
measles and now this. So, I am going to
let her do what she likes for now. I know
she likes to play with my Nokia 5800
when I come home and I made sure she
gets it first. But also, I have to be fair if
Kristine asks for it first, though. 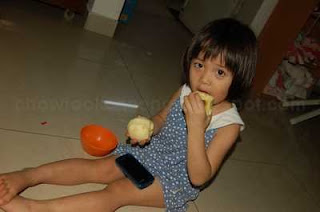 She also knows I am giving her a break despite all
her naughty antics. And so, she shared with me,
her (eaten) apple as a token of love. I know it too.
Date: Thursday, June 11, 2009 No comments: Links to this post

Back then, during MacFarlane's Spawn comics, there were two characters which interests me. These were the good guys, Detectives, in fact, by the name of Sam and Twitch. They were so popular that they had their own comic titles as well. Anyway, MacFarlane also created the toy figures for them too but at that time, when it came out, I was too broke and busy to get them. Until now, that is.

I am not sure why I was so fascinated with the figures but when I did get the chance to read a few pages of them in action, I was pretty much hooked. Sam Burke is always seen as the brawn of the gourp even though he is a bit rough and hot tempered. His partner, Maximillian Twitch is famous for his sharpshooting skills but usually, is the one who solves the puzzle. Bot of them makes us a nice team and from the Internet, the comic series was quite interesting. Unfortunately, I did not realise they had their own title and so, the comic shops did not order any for me. Nevertheless, I am not bothered by it anyway. What I loved about these two figures were that they were sculpted from one of the comic covers. 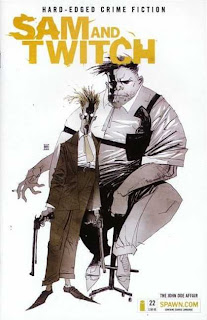 This was the cover from which
the figures were scupted. The
image was taken from here.
After seeing them, I would
have liked to see them do the
figures from cover #19 though. 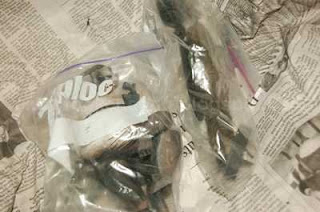 And so, from the second package, I got these two big
lumps of vinyl. I cannot call them action figures since
they are not very articulated. 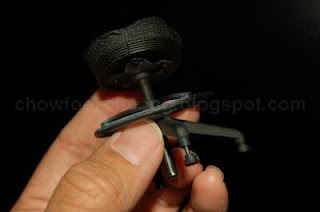 Even Sam's accessory, the chair was scuplted in such
a way they it fitted him nicely. 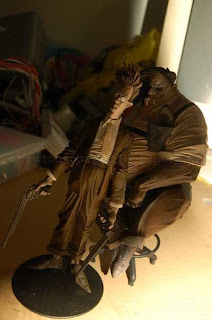 I have ideas for putting them in an
office diorama but since I do not
have any of their comics, doing the
diorama without any reference is
not easy. Still, tonight, I will take
some photos before I put them
away for storage. Here, I played
with the flash by partially blocking
it. The effect is like taking a photo
from an exhibition where there is
lighting under the shelf 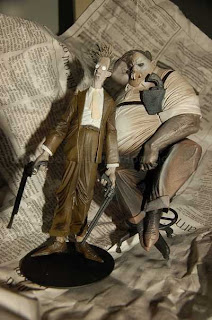 Next, I used the newspaper (from the packaging, la)
and used the Nikon D50's flash direct. The result is
not a nice picture. Sam's mouth look more like a bad
vampire due to his cigarettes 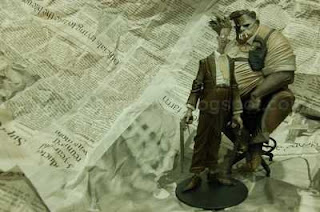 Then, I repositioned the newspaper to cover up the
back and kept the flash off, this time, I used a box
and the IR remote as the dim lighting from the
fluorescent lights (OK, no money for a table lamp)
made it impossible to get a steady shot by hand. 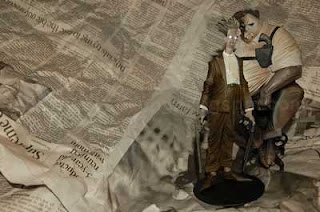 Ok, so I tried flash again and I was not happy.
(Loctor, no money to buy flash la. Ha ha ha ha!)
It looked like they came from an old black and white
photo, and it looked so wrong 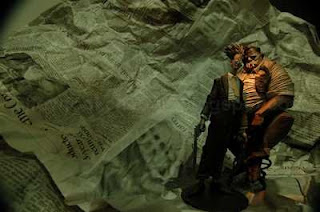 Then, I decided to switch off one fluoroscent and try
again, this time with an almost exhausted torch light.
Hmmm........ not bad. This is almost the lighting I had
in mind of I wanted to do a model diorama for them.
However, the picture looks like they came from one
of those Sejarah (History) Textbooks in the 80's. 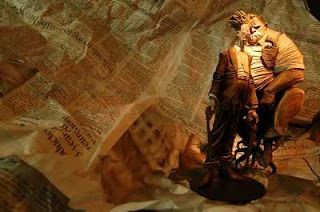 Then, since the camera was set for a long exposure,
I waved the torchlight around. Hmmm........getting
there. But I don't like the background. Oh, you won't
notice about the round black base Twitch was standing
on until I tell you, eh? That's why I need to try this
idea for the lighting. 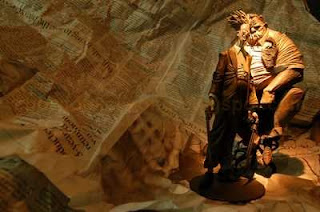 Anyway, after much trial and error, I got this shot
which is very much better as they now have some
shadows. Now, THIS is the lighting I wanted to do
for their diorama. Unfortunately, Twitch is facing
too much to the right as he is supposed to face in
front, looking at us, like in their comic cover.Oh
well, its late in the night anyway, but you get the
idea of what I am trying to achieve. No flash, just
a fluorosecent, a dim torchlight and some papers 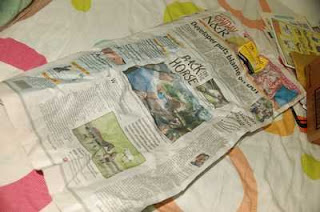 Speaking of papers, the toys that was packed in, is
the Sunday N& R (News and Record) from North
Carolina, dated 17th May, 2009. Its a bit different
as although it has the large format as the old News
Straits Time, but its a bit thinner, by a few inches.
I told the seller about the nice papers in a non-
sarcastic way, of course.
Date: Thursday, June 11, 2009 No comments: Links to this post