[02.10.2005]
Today is the second day of installation where I concentrate on the new PBX's wiring and new extensions. My tech went home today, so I am pretty much alone. The job took longer than it should (until 8:00 PM) since there were others installing Network cabling in the same room, we sort of took our turns in the room (It was crowded). There goes my Sunday 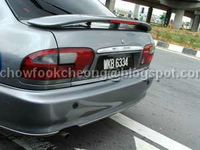 This stupid wira tries to cut into my lane at the lights and my mood went from happy to pissed in 2 seconds.
So, I took his picture and block him off from cutting in. 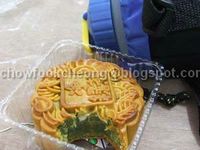 This is my lunch. Pandan Lotus Paste Mooncake 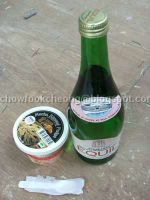 More Ice-Cream and a sparkling mineral water. This time, I saved it for my Wife and Kristine
The customer even offered to buy me lunch but I declined 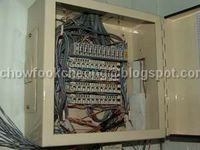 Remember the old system's DO Box?
Its cleaned up now, took me hours to replace and reconnect all the cables 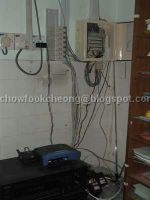 The old system is gone and now, after tweaking their aerial, the radio got a much better reception

[01.10.2005]
While I was working on the PBX system, there was a father and son team who were in charge of the Office's carpentry. So, they were installing a door for the new PBX room. The relationship between the two is quite normal. The father will cuss impatiently at his son as if he hated his guts while the son feels indifferent and still treat his Dad like a colleague. Ha ha ha ha! 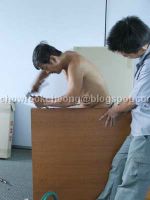 Dad: Hold the door, dammit! Fuck! Just hold it! Don't move! Quickly!
Son: I am holding it. If it won't move, it wont move 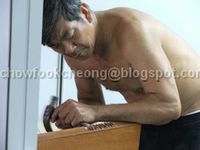 After much more cussing, the Father went to work chiselling bits of wood to fit the hinges
Yeah, we're all working without the air-con 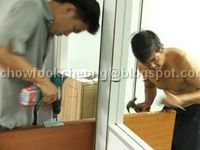 While he is doing his part, his son starts to install the hinges 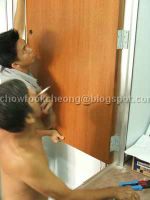 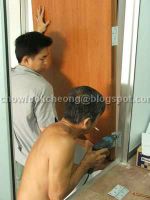 This is a new method; Normally, screws would be used but today, I can see the father is using rivets

Dad: Just hold it! @#*!&% Now its out of alingment! Hold it!
Son: Don't forget to shave off an inch at the (door's) bottom for ventilation. Customer says he will be putting in electronics equipment
Dah: Haiya! Don't listen to him! I know what I am doing! If you listen to him, we'll never get things done! Tiu! Listen to me and hold the door!
Son: Well, if you say so. I am now holding the door (sarcastically). See? Its not even moving
Dad: @#*&%

[01.10.2005]
The object of this installation is to upgrade their current PBX as the customer is expanding. We are to install the new system in another place. Because the original phone cables are still in the old place, they will be connected via a series of more cables from the old DP (Distribution Point) box to the new one. Once we install the new PBX in the new place, their current phone system will be taken off-line. Because they are of the same brand, the upgrading is easier for the customer because he does not need to change everything. Therefore, the phonesets stays. 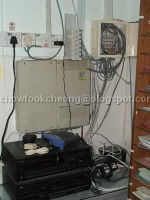 This is their current system, its a bit messy with all the Network hubs and also the PA system which gives very bad reception 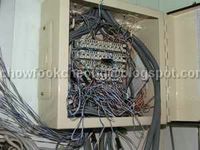 And not to forget, a very messy DP box.
You can see the thick 20-pair cables (right) which is to connect the current DP Box to the new one 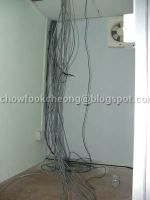 This is the new PBX room, where only the light and fan worked
The 3 power-points were not working..... 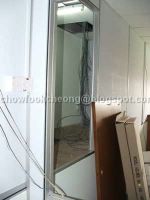 The room was renovated above the staircase 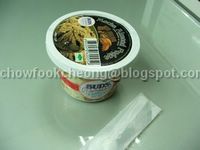 While we're working, the customer gave us some Ice-Cream! Yum-yum!

[01.10.2005]
On our way to the customer's place, there was a sudden traffic jam on the LDP (Lebuhraya Damansara-Puchong), just 100m right after the Kepong toll up until the first flyover. It took me roughly one hour to reach that distance. 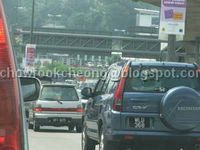 This is a very unusual traffic jam 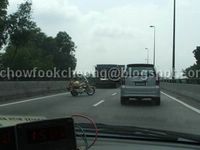 The cause of the jam? 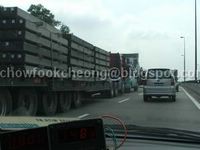 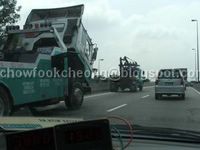 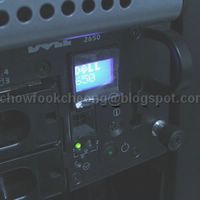 I always wanted one of this. It can either be a switch or an animated status display
Unfortunately, if I am not mistaken, its quite expensive
Date: Monday, October 03, 2005 No comments: Links to this post