Its been almost 24 hours since the Nokia 5800 firmware had been upgraded. Initially, it came to me 2 days ago when I started to backup the phone. I have been doing this about once a week ever since it stopped syncronising with the Outlook software. Unfortunately, because of the way Nokia uses the router ports, I did not want to screw up the Office outer and so, waited until I was back home (Because I fail at router configurations, thats why). Like v20, the latest upgrade is, well, nice. Very very nice indeed. For the past 11 months, it was claimed that almost 8 Million units of the Nokia 5800 has been sold and so, firmware support is still quite strong. Most of the features could be taken off from the new Nokia 5530. 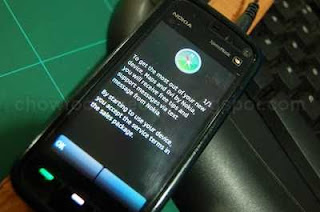 There was a nicer screen earlier but by the
time I ran down to get my camera, it's gone. 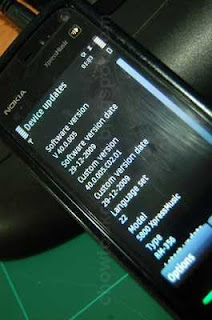 The latest firmware, is v40.0.005
Things started to hot up after v20
where it saved on battery life. 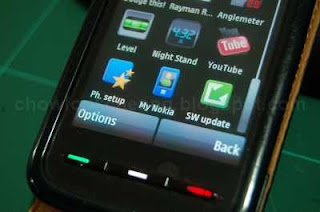 One of the icon is missing but the last three is
new. What I like about this, (not the icons) is
that in the previous firmware, when I was in
the Menu screen in either Landscape or Portrait
mode, exiting to the Main screen and then
back to the Menu screen, the screen mode is
retained in the last setting. In other words, if
I was in Landscape mode, exit the Menu and
then went back in again, I would need to 'turn'
the phone the right way round for the screen to
orient itself back again. Which is irritating when
I was surfing sideways in bed. *ahem* 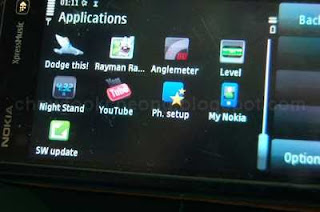 But now, if I was in portrait mode in the Main
screen, when I go into the Menu screen, it'll
follow the same portrait mode unless I turn
the phone around and vice versa. Good, eh? 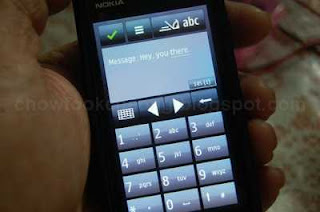 Another one is during SMS mode. When you're in
Portrait mode, you get the usual keypad screen
like the one above, which I am more used to. 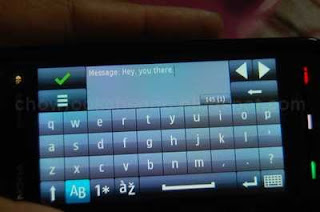 But the moment you turn the phone to Landscape
mode, the QWERTY keyboard automatically pops
up. Quite nice but I confuses my thumbs. 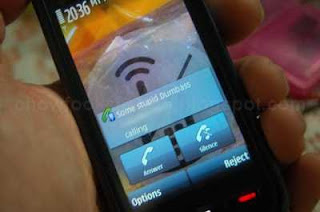 Best thing is, in the previous version, when you
get an incoming call, this is what the screen looks
like. Which is fine for me. 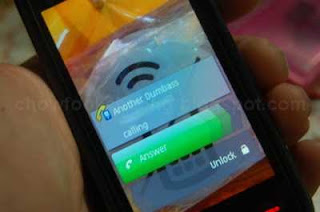 But in the new version, the screen changes to
something like an iPhone slider. Yes, you need
to slide to the right to answer or slide to the
left to unlock. Luckily, you can still press the
green CALL button to answer or flip the phone
to reject the call. 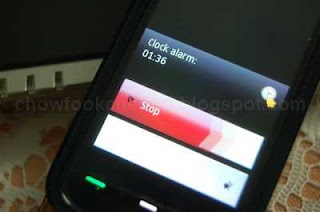 The Alarm clock screen has also changed.
In the previous firmware, you just press the 'STOP'
button. But luckily, I can still flip the phone over
to activate the snooze mode. I mean, who
would wake up to slide the screen? 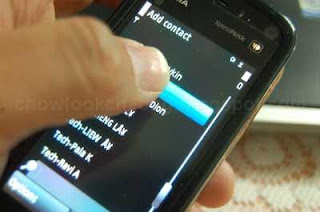 Another significant feature that came with the
update is the kinetic scrolling. I don't know how
to describe this but on normal scrolling, the
moment your finger lifts off the screen, it would
stop. And sometimes, its a pain in the butt, to get
to the correct name and using the side scrollbar
only frustrates you further. With the new scrolling,
its much better to use the phone, especially if you
have hundreds of songs or names in the phonebook. 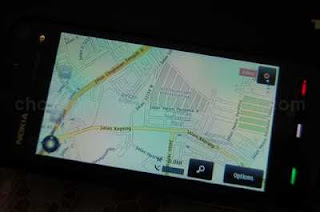 Oh, and the OVI Maps now lets you view the
GPS in Lansdcape mode. 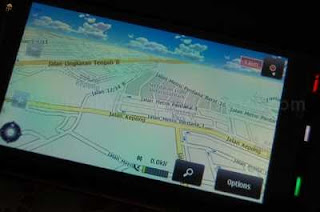 Looks so nice in 3D mode as well 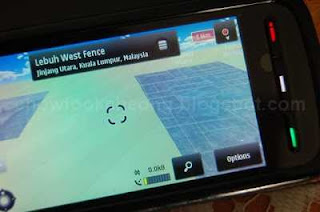 I accidentally went online mode for a few seconds
before it switched it off. But this is what it down-
loaded for the satellite mode. Nice but expensive. 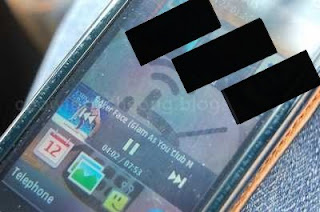 And now, the new 'Contacts Bar' in the Home screen.
In all its previous firmware, if you wanted to have a
Contacts Bar, you are limited to only four contacts.
But this new one allows you to enter up to twenty
and lets you slide them from left or right. The only
problem is that I lose the Calendar screen for my
appointments which I am so used to it by now. But
then again, in a few weeks time, hopefully I do not
need to use it. Much. Oh, and while you're playing
music on the main screen, if your music has some
album art, it will be displayed. Just that you cannot
FWD or REW the music. 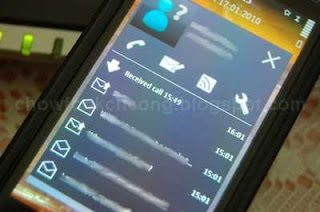 What is nice is that once you get the person you want,
their info would pop up with a short history of calls
and SMS to and fro. Unfortunately, I am so used to
pressing the digit on the dialpad to call each person
so getting to this screent akes some used to but its a
great feature to have. 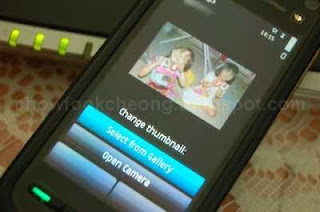 Even putting pictures for each contact is a breeze
but you cannot edit them to 'fit' into the correct
size, so I used the 640x480 format instead.

So, what do I think about the v40 firmware? Personally, its nice and because of these features, even though it was inspired from other newer models, it gave the impressions as if the people at Nokia really thought out and improved the little things that make this interface a pleasant to use. The only problem is that my phone still hangs unexpectedly, especially during telephone conversations.

Either way, its affecting the battery consumption. And talking about battery consumption, I think v40 makes the phone consume more battery. I notice this because every night I would charge it and by morning, it would have dropped a bar. 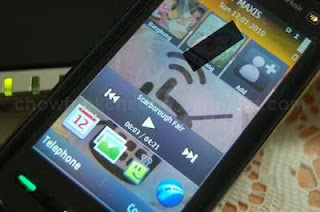 Oh, this is the screen when I am playing music.
I don't mind the screen coming on when its being
charged but not when its on standby. Sometimes,
the screen gets corrupted too with the overlapping
lists when I kinetic scroll on the Contacts list. Not
only that, the Contacts Bar above freezes a lot and
when shows you the contact when you're actually
scrolling instead.
[Update: 02022010] 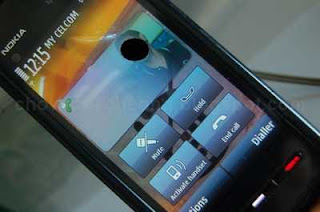 This is a very nice screen when a call comes in. The caller's picture is shown but also with his number blended into the picture. Nice effect which indirectly makes you feel nice about this coming call. Ha ha ha ha
Date: Sunday, January 17, 2010 4 comments:

Everytime I passed by tziplee's I would stop at the section where they sell architectural stuff. And the one thing which always catch my eye would be the figures. The have them in 1/75, 1/100, 1/150, and some 1/18 or so. In the late 90's or few years ago, these things are rare and the only place you can get them would be those specialist toy train shops or order from overseas. There were a local shop which sells them but it was always elusive to me. Anyway, for RM10.00, I got 50 unpainted figures. They also do sell the painted version at the same price but you get 30 figures instead. 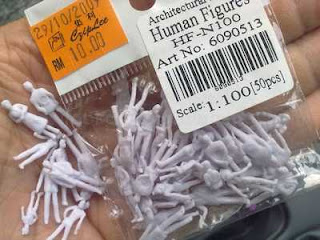 And so, I can use these for my Gundam
models. If I ever do build them, that is. 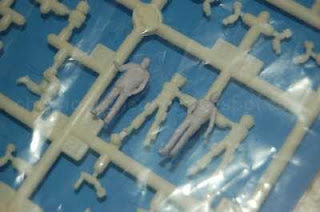 Compared to the WAVE 1/100 figures, they are
spot on. If anybody asks, I would say these are
chunky Europeans versus lean Asian guys in a
spacesuit. 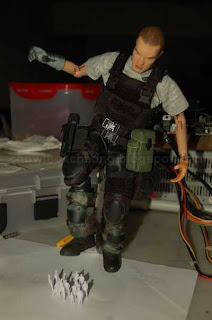 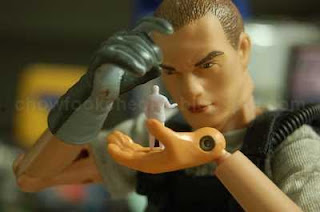