You know, going to Mid-Valley today was really weird. We went there about six in the evening and the funny thing was, there were no long lines of cars waiting to get in. Rather, its like as if no one wanted to go in. So, we got a good spot quite fast (and also at the right place and time). But then, as we saudered around, there was not much crowd as well.

However, when we went to Carrefour, we realised where most of the crowd has gone. However, I was sad to say, there were not much Malaysian Idol fans there because (although I hate crowds) the crowds was quite thin. Either that or the advertisers did not do a good job. 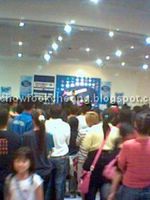 Malaysian Idol Adam on the stage 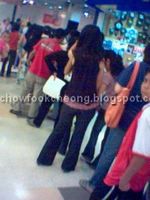 After an hour at Carrefour, we saw one heck of a long line.
At first we thought it was the line for those people testing those cards at the "lottery machine" but uopn closer look, a lot of them we carrying Malaysian Idol posters. Yeah, this is the line for their autographs 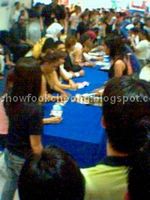 This is an overhead shot of the idols doing the signing 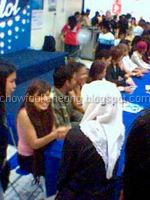 I managed to get a closer look (damn! I did not bring my FujiFilm FinePix S5500) and you can make out Fara and Ash


Finally, after seeing the prices of those Durian, Chocolate, etc Mooncakes, I decided not buy any but just the odd one for prayers. I mean, RM10 for one mooncake! What a rip-off. maybe if i can find a Mooncake mold, I might make my own version for next year. Cheesecake Tuna Mooncakes. Ha ha ha ha ha
Date: Saturday, September 17, 2005 No comments:

Since we're at Mid-Valley, we decided to have our dinner there. At the Oasis Food Court (Middle Court), I did not go for my usual "Ikan Bakar with Petai". Instead, I went for the stall near to it, which specialises in Claypots.

I was in front of the stall, and decided to choose the "Butter Chicken Rice"

Then, two bimbos quickly rushed in, trying to order as well, disregarding that I was still at the counter 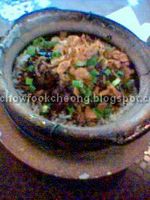 Do I like it? No.
She poured some black stuff, stuffed in those onion stuff, everything that makes a Claypot Chicken Rice but last of all, melted butter and mushrooms.
Wifey knows how food tasted like, said the butter stank.

After dinner in Mid-Valley, I sort of got lost and found myself in front of a new shop. Its a Kakimotor Car Accessory shop and boy, the stuff in there really made me want to take out another credit card or two. 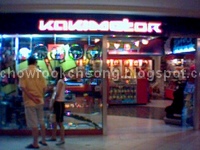 I was at one of my friend's workshop today because Wifey's car had a disagreement with another car the other day. It was really a hot day and I got bored. While we waited to get the bumper changed, I was looking at the colour charts of one of the local paint manufacturers. I was surprise at how they described the shades, which was a bit hilarious.

My friend, Sam Wong, even re-did our door window visor (with double-sided tapes) for free.
(OK, this DIY venture took me 2 years to get it fixed) 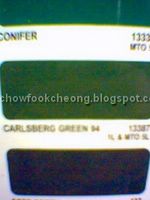 Carlsberg Green
(The green you see on the beer can) 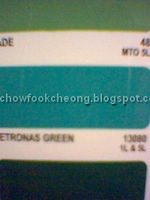 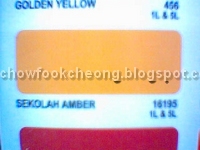 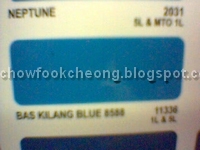 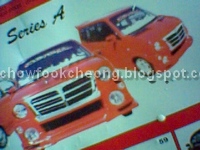 Wanted a Toyota Alphard but can't?
Here's a Kelisa Fibre Kit to make you feel a little better 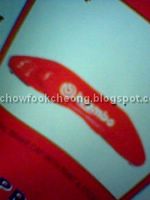 And they even have brake covers and sticker too
(Should I have one or should I not? Heh Heh heh) 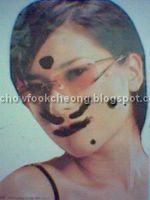 Just as I was about to go home today, one of our friends paid us a visit and he let me play with his mobile phone. It is a Motorola RAZR V3 but in black. When it was first launched last year, I think at the price of RM2,888, it came in silver which was quite nice. But once the black version came out, it was something to die for. Yeah, I wanted one. Badly.

But once reality sank in, I realised that I could never own such a phone because whatever electronic things I come into contact, sooner or later, it would break disasterously.

Anyway, when I held the phone, it feels right but also fragile at the same time. The keypad looked nice but when I tested it, well, suffice to say, it was not touch buttones as I wished. Although it does not have Infra-red, the phone does have Bluetooth. 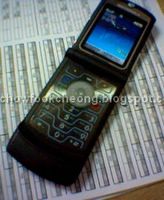 When it was opened, it looked quite nice except for the shiny keypad 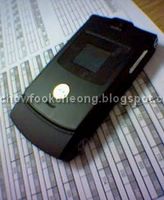 When its closed, it looked quite cool too 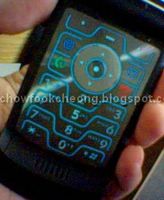 The shiny keypad with the blue Electroluminescent Light

Remember my customer in TPM?

I was there today, as promised. And unfortunately, we had to drop any plans for work as her Boss needs to do more renovations which means I could not do my job. It was so frustrating as I was really looking forward to finishing the job, get paid and close the book once and for all.

Beleive you me, there are a lot of things I still need to complete. And next week is a no-no since my schedule would be quite full with outstation visits.
Date: Saturday, September 17, 2005 No comments:

Its going to be a long week

So sorry that there were no opdates for the past few days as I was quite busy (OK, blogger's block). Come next week, we'll be travelling from North to South visiting and maintaining some of our customers. So, I could be on hiatus for awhile.

Moreover, with the Mooncake festival being tomorrow, I have yet to buy those mooncakes, especially those Jelly types which I have absolutely no idea where to get them.

Then, there is the dilema of Kristine's first Mooncake Festival which, I am not sure if Wifey wants to let her play with lanterns, because:

So much to do and so little time.