Like all families, the Eve of the New Year is very important. Everyone will try their best to come back home and have dinner together. It is also a time to mend broken relations and strengthen ties. But like most families, this time, I suspect everyone is having it at home due to the World Economy Crisis. Before I got married, this was the norm for us and I loved it because after the dinner, we can all just leave the table, wash up everything, and while I was still in my worn T-shirt and shorts. But now, have to dress up a bit more la.

And like any Malaysian, I had to rush out for some last minute shopping to get some ice cubes, chili sauce and a bit of food in case its not enough (in the end, it was too much). Still, it was interesting to see the locals folks doing the same but I can tell you, much of the street was quite empty and most of the shops were either closing or closed, with the exception of non-Chinese owned ones. Too bad Uncle Ho closed early too but then again, everyone would be too busy to watch DVDs after dinner anyway. But at least my Sis and parents get to watch Ip Man (Pronounced Yip Man and not Ai Pee Man, much to my embarrassment) 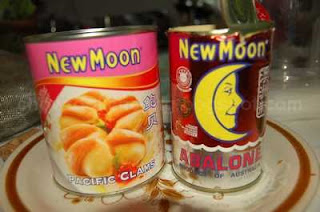 Wooo..... OK, this one has no funny smell. And its
all the way from Singapore. Don't worry, the one
that is being recalled is the Abalone Broth which
is made in Thailand. 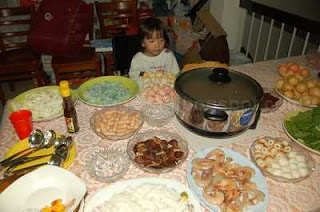 Kristine being overwhelmed with so much food on the table.
As usual, both girls were picky eaters that night 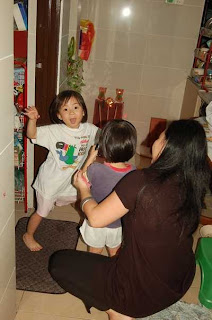 The girls with their Aunt, trying out her camera 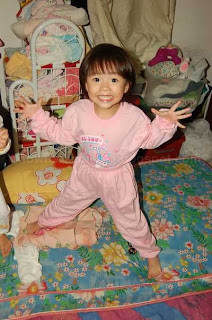 Kristine with her new baggy pyjamas, which,
if not tucked in, made her look very thin 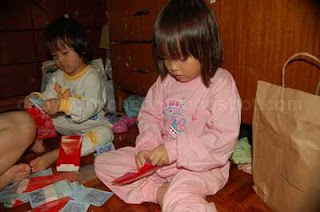 After the dinner, it was time to get the Ang Pows ready for
tomorrow's Tea Ceremony. Here, both girls were helping out.
They do know the importance and the seriousness of money
but not the value yet. 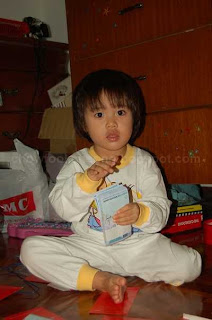 The whole time, Kaelynn was obsessed
with the wad of RM1.00 bills which I told
her not to touch or take any out to play 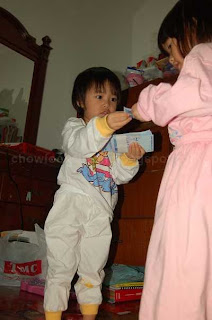 And yet, she does..... haiya.
Giving to her sister summore 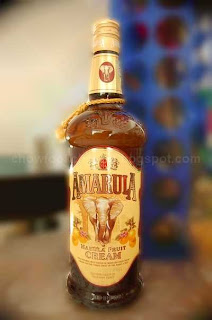 After years of storage, I finally opened
the RM59.00 bottle of Amarula. Its like
Drambuie but a little bit more sweeter,
I think. With 17% alcohol, just one
swig and I had to lie down for the
rest of the night........... haiya

And after that, I used the Nokia 5800 to SMS most of my friends in the Phonebook and it took me about almost 7 minutes because each SMS is about 5 seconds. Yeah, thats a lot of people but I got about a fraction of replies, mostly from actual friends (whom, I think, did not change thier phone numbers. Hey, my Phonebook is more than five years old, OK? And I got a few call backs from unknown people.)

I am not sure what happened but after the normal dinner, everyone went to sleep and someone switched off all the lights. This is unusual because usually, there is always one light on. But tonight, it was all dark. And so, as I was navigating my way to the kitchen, and after missing the
cat, my toe hit the rubber wheel of the shopping cart. I felt a slight pain, the one that is sharp and goes away after a few seconds but this time, after a few minutes, the pain was still there. And so, I looked down at my foot........ I quickly bandaged it and hope that if the nail comes off, it would be
painless. And if it does not, I hope it goes back in and not hang about.
First time I've seen so much blood for a nail injury.
Date: Sunday, January 25, 2009 No comments: Links to this post