OK, so after leaving it in the freezer for a day, it was time to see the results. The theory is to let the water seep into the model's cracks and gaps so that when the water freezes, it would expand. By doing do, the stress from the expansion would then force the super glue to fail... 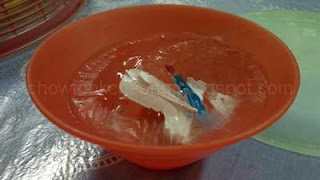 And so, the Enterprise is taken out of cold storage... 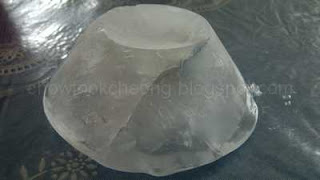 At this stage, I was very tempted to just put
this in my drink. But somehow, the very idea
of being choked by a warp nacelle or have my
throat ripped open by the secondary hull is
not a good idea afterall. No amount of coaxing
can get them out from the butt either except
by surgery. 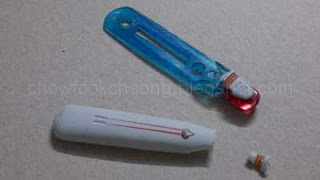 OK, the first casualty was the warp nacelle which
failed to separate cleanly into two pieces. 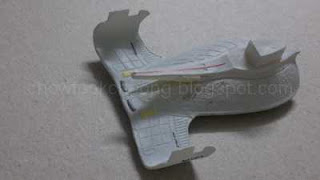 And the Secondary hull was a disappointment as
well. In the end, I had to try an pry it even further
but after thinking much about it, its best to leave
them alone for a while.
A call to Bruce later yielded more information; I am supposed to do this repeatedly, something which I am not too keen as I notice some paints are actually chipping off from the model. So, what else can be done to separate these parts?

Poo-poo killer in a can

Years ago, I've been collecting these metal containers. They are actually air fresheners which usually, comes in very handy after you made a very bad poo-poo. With just one press of the finger/elbow/nose/forehead, a slight mist is released and within seconds, the whole room/toilet/car/underwear smells nice.

Whatever it is, everyone still knows you made a bad poo-poo.

1. They're always empty
2. When you release it, the fumes are uncontrollable (see Point #1)
3. No one ever replaces them

Still, this is great news for me because, I get to *ahem* liberate empty ones on every toilet I visit...

So, why the fascination with these little metal containers? Because they looked great as fuel containers or other stuff when it comes to Science Fiction scale modeling. At that time, all I could think of was that it will look great on a 1/100 Gundam model. Fast forward years later, I still do not have a perfect Gundam model but I can tell you that it would look great on a Gundam... 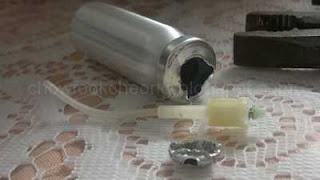 Anyway, this is how you would 'clean' the can.
Make sure the contents are empty just in case.
You do not want to have shrapnel embedded
in your face, as this is very embarrassing when
going through Airport Security. Anyway, take a
pair of pliers and carefully crimp and twist the
top part until it breaks as the metal cap is very
soft. And stop smelling the expired fragrance
otherwise people would think that you have
an extemely bad case of poo-poo in your nose. 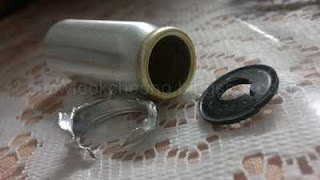 Because it was my first time taking it apart, I
was afraid that I may have spoilt the can. But
on closer look, I saw the rubber seal which tells
me that the cap can still be taken apart further
without totally destroying the can. I was right.
And so, there you go, a nice clean poo-poo killer
taken apart.
Date: Sunday, May 15, 2011 No comments: Links to this post 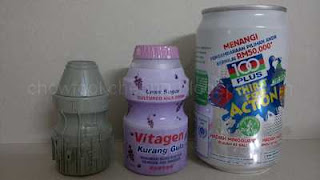 You know, somehow, either the Japanese's Vitagen
(or Yakult over there) is smaller than ours or, the
new Hasegawa Falke model kit is smaller than the
Kow Yokoyama's original. Then again, I am unsure.

Someone got married to Someone else

It had to happen anyway. It started with one day, someone met someone and they both found out that they somehow liked each other. At first, they did not realised it as it took them sometime to discover what is love. 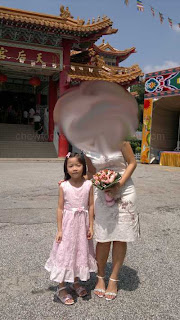 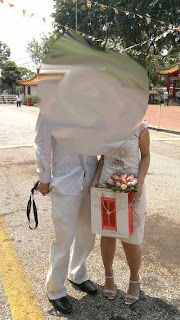 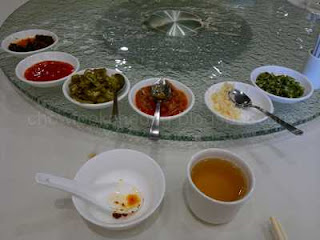 Lunch at Noble House, Near Jalan Imbi. So, I am
not going to say much about the couple as I am
hungry. And this is the only place that has so many
sauces at once. From left you have the crispy prawn
chili, the chili sauce, the green chilies, sambal, raw
garlic and the last was the green chilies which packs
a punch. But there is no soya sauce in sight. 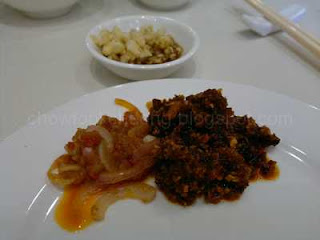 So, I settled for the sambal (with lots of onions)
and the crispy prawn. Since I am one of the
designated driver, I decided that it was best
not to eat too much garlic... 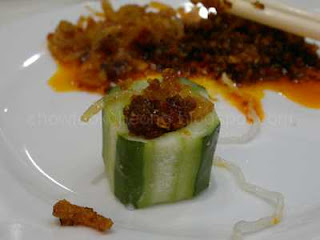 You can see that I am bored by the way I
stuffed the decorative cucumbers with the
crispy prawn chilies. 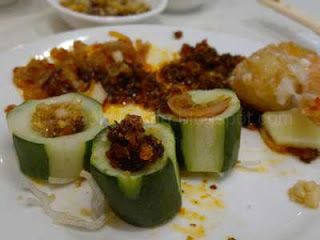 They're great! So I expanded the idea with garlic,
the prawns again and also, the sambal. I had a hard
time deciding which was best as the table ran out of
cucumbers all of a sudden *ahem* 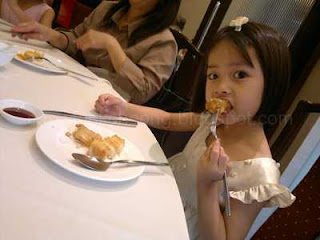 In the meantime, Kaelynn wasted no time with
all the food coming thick and fast to our table.

On the other hand, Kristine is discovering
the pleasures of slurping up fish skin. 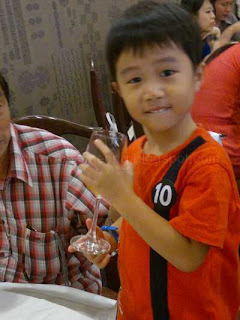 And an Orange Ben10 was seen sipping
some very suspicious liquid.... 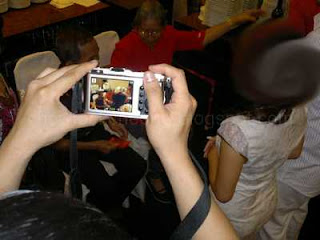 Halfway through, something exciting happened.
This also means we do not have to go through
THE forthcoming Dinner. 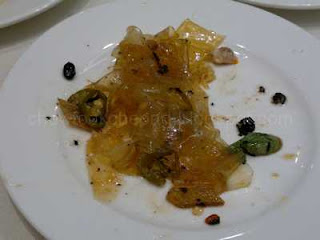 Me? I am more interested in this semi-transparent
kuey teow thing that came with the fish. Its delicious! 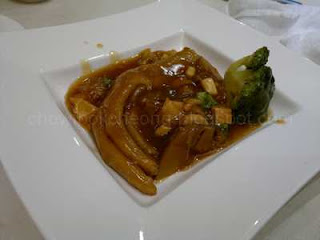 But not so was this. The waitress came and showed
it to us country bumpkins as if it was made of gold
which we have not seen before. She even asked if
we want to take pictures before she cuts it up, and
I swear her tone was very sarcastic. In the end,
not many at our table ate the claw thing. 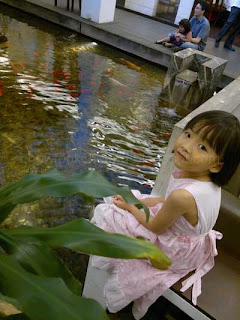 In the end, the girls and I decided to
have a walk around Noble House. Its
a very nice place and with this fish
pond located indoors, it is a great
attraction for everyone. 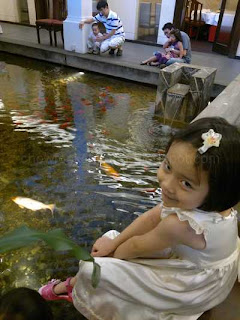 That is, if no one decides to jump in
and catch the fishes..... 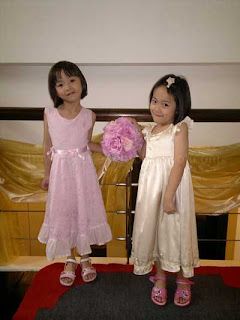 Everywhere, the decorations in
Noble House screams of photo ops. 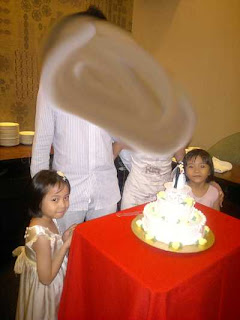 Finally, Someone got the knife and someone
else made the cut. And I am so happy for
them both. 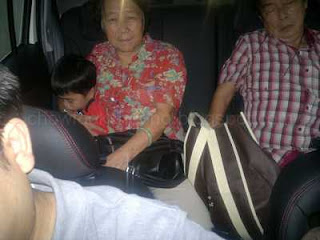 On the way home, it was raining heavily and
with the strong winds, a lot of things really got
blown. But that is another story which I won't
tell. It just full of air...
So, Congratulations to *censored* and *censored*!