One thing I hate about customers is when they employ Aunties to clean their offices. As such, these Aunties are so efficient to a point that they never realise their actions have expensive consequences to the customer. take for example, the humble 4-way socket.

This is a small little grey plastic box whole sole existence is to connect the cables from the PBX to the cables to your phone. You can throw the little guy on the floor and he will sit there quietly. Sometimes you can see him stuck to the wall/table courtesy of some sticky double-sided foam tapes. So, there he is, minding his own business on the floor when Auntie came with a very wet mop. With one big sweep, the tiles are clean but our little guy is momentarily drowned in a potent mixture of Terracare/Savlon/spit (or some other washing liquid on Sale at Makro).

And all of a sudden, voltages from the PBX surges through the metal inside the little guy and we have a very nice Chemistry lesson on Electrolysis. As a result, the copper in the cable are eroded and becomes green (just like those you see on your spectacles) on the outside. But inside the cable, it becomes black where the poor old innocent guy (like me) would have to take his blade to scrape out the black stuff.

And if its too severe, the little guy gets replaced and sometimes, the worst thing that could happen would be that the cables would either have to be cut short or get replaced too. Because moisture inside the cable is bad news. You would get complications like shorting, unreliable signals or even permanent damage. This is expensive because you'd have to pay the guy (like me) to lay a new cable all over again. 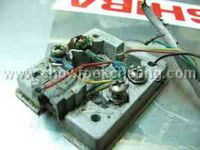 See the green stuff at the top left of the screw?
Its Copper Sulfate. In other words, the metal connectors and the cables are "screwed"

While my assistant was doing the cabling, I was inspecting the other cables at the Riser. Tomorrow, the Time Telecoms people would comission th eline and I will then connect these lines into the PBX. Too bad I cannot shorten the installation time due to the customer's insistence that I cannot remove their remaining PBX equipment until after 4PM today.

So, for tomorrow, my tasks are:

1) Commissioning of incoming lines
I will have to wait for the Time Telecom guys to tell me where their newly relocated lines (from UPM) are before I can connect them to the PBX.

2) Mounting of the third cabinet
Yep, the cabinet I removed this evening is going to go up there. And again, more cabling to be done.

3) Removal of Panasonic PBX at 12th Floor
Once I have removed the Panasonic system, I will have to trace and connect the previous cables to the new PBX system located two floors up. 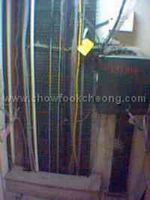 This is the telephone riser which you can find on every floor.
The tenants would then engage cable contractors to lay cables from there into their own office. 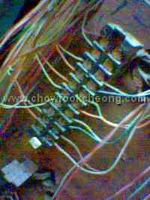 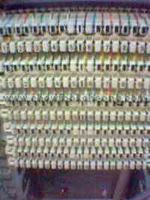 This is the modern connector made famouse by Krone.
The source cables would be on top while the connecting cables would be at the bottom of each Tag.
You use a special punching tool to connect the cables.
Very systematic and neat 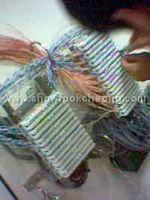 I have split the calbing between the PBX (left) and the telephone extensions (right).
To connect, I just punch in the "jumper cable" between the two sets of Krone Tags
My assistant of the week can be seen punching the cables in.

Just as I was going up to the 14th floor, there was a mosquito in the lift. While waiting for the lift to reach the 14th floor, my itchy hand touched the 7th floor. So, when the doors opened, the fat mosquito, full of blood, flew lazily out and into the Office there........

Ok, I wanted to take a clearer picture of the missing M&M.
But it rolled into the car's floor and I must have accidentally stepped on it with my boot while driving.
Date: Friday, July 08, 2005 No comments: