We were at Mid-Valley today and I got the chance to visit some toy shops. One of them is Miniature Hobbies which I loathe to go (due to some past history where everything went downhill after one of my friend got badmouthed when the shop was still in 1-Utama and lost his job). Unfortunately, apart from Hobby Bounties, they're the only place left in Malaysia that has a decent selction of model kits.

Anyway, while I was there, I spotted this 1/144 scale model from the Chinese company called Trumpeter. Originally, this model came in a few variations but they were all painted by the manufacturer and encased in a clear plastic case. However, this kit was selling for RM6.90 and unpainted. The painted version costs RM14.90. So, in the end, I bought the last two from the shop.

The assembly is quite straigthforward. You just sort of snap the parts together and that's it. But I had to use a dab of UHU Glue for the front and the fairings above the tracks. 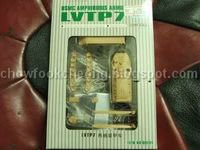 The model kit in its box 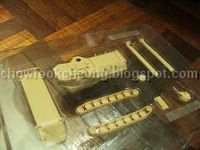 Theres not many parts, just about 9 pieces 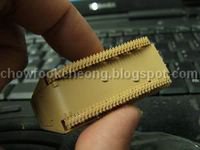 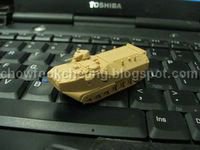 I then decided to try my luck on getting Daniel's (Second Malaysian Idol) single which had the song Mimpi for RM8.90 but Wifey said its a waste of money.
Anyway, this model coming from China is too good to be true. So, I did a little NET surfing and discovered this. The instructions on how to fix the model and the parts are the same.
Date: Sunday, November 06, 2005 No comments: Links to this post