When I was a kid, there was no such thing as ice-cream treats or the chance to ride in air-conditioned buses. I mean I am not one of those "I used to walk 10 miles to school everyday" students. This is a City and the chances of you doing that is very small. Moreover, if you try this now, you're going to get robbed/hit by a car/bike/running dogs, etc. or worse, get lung problems from the Haze which is becoming more frequent.

Anyway, once school is over, the bus is already there, waiting. Trying to beat the crowd at the Ice-Cream bike or the Cendol line means sacrificing a seat on the bus since everyone is rushing to go home. So, you have your choice made very clear to you.

But with the current Generation, its either the Bus or the Parent's car.
Date: Thursday, March 08, 2012 No comments:

Today is a very special day and it just so happened to be the first day too. Litt tak is having another Warehouse Sale. So, although I do not have the mood, my hand was still itchy. With ore and more people knowing about these Sales over the years, the prices of the 'wanted' items are not really that cheap anymore. And even if they are, its not my type. 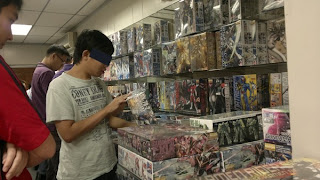 Oh, man. Even at this time, there are a lot of Gundam
Heads in there. I wanted the 1/48 Bandai Sengkai 6500,
which is a research submarine, but at the price of RM178,
its still to expensive and not much of a discount.

So, what did I get on this special day? I will reveal it to you later. Something which is a great bargain....
Date: Thursday, March 08, 2012 No comments:

So, this is what I got from the Litt Tak Warehouse Sale; a Bandai Ver. ka Core Booster and One-Piece's Trafalgar Law's Submarine. Actually, deep in my heart, I wanted the Bandai 1/48 Shinkai 6500 which comes with lights and is quite big. However, for RM178, its too much for me. As you have already know, I already have the Core Booster and having another box is actually a waste of money. But I bought it regardless because during the Sale, it costs less than 10 McDonalds value meals. 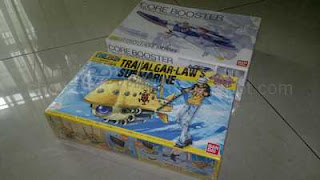 Same box, different scales. But is it the same
manufacturing technology?

I a not a fan of One-Piece. Not because I like it but because there are so many episodes (in the regions of three digit) you can't really catch up with all of them. Not only that, you have to make up your mind if you want to read the Manga first or watch the anime. Either way, its like Bleach all over again for me, which means its never ending epiodes. So, this time, I just steer clear of it and pick out whatever is nice. 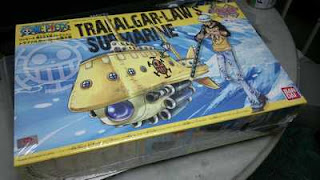 And so, this Trafalgar Law's Submarine is nice... 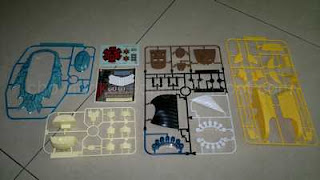 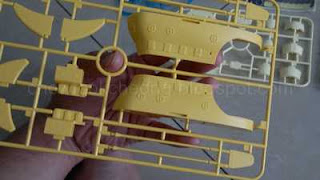 But to me, the size of this model is quite OK.
Not too big, not too small. And after looking
at the instruction sheet, its is quite hollow
inside. That is, if you care to remove all the
'extra' parts. 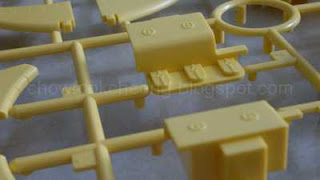 One thing that is different from other Bandai kits
is that the way the parts are held together. If you
look closely, it is designed to be 'plucked' by hand 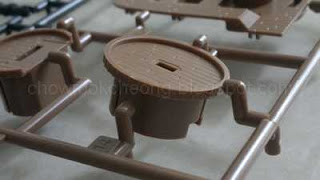 In other words, you do not need to put much effort
into removing the parts cleanly as this picture shows.
The brown part came off as it was accidentally 'crushed'
which effectively made itself 'pop' out of the sprue. 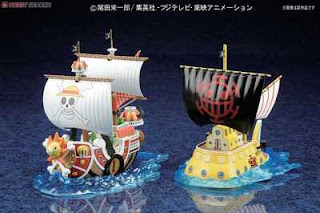 Just like the other ship, there is an additional clear
plastic part which resembles a wave. What you do
is remove the lower part of the submarine and then
stick the wave part over it and voila! 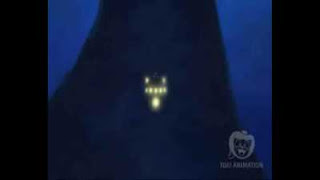 So, this is the idea. When I was researching on this
Sub vie the Internet, there was a short clip showing
how it lights up underwater. Which got me thinking
that it would be nice to also light it up.

As this is a non-scale model, you can literally do what you think you can with it. Initially I was thinking of:

1. Replacing the floorboards with balsa wood for a more realistic grain.
2. Cut out the rails and replace them with Plastruct parts.
3. Remove all the portholes and insert LEDs inside them
4. Replace the sail with a more realistic one but there is a problem with the Pirate Sign.

Ah, forget it. I just light it up, maybe using a solar cell or something...

An Arab enters a taxi in New York and he asks the driver to turn off the radio and explains that he must not hear music as decreed by his religion for in the time of the Prophet, there was no music especially Western music which is music of the infidel’s, and no radio...

So the driver turns off the radio, stops the car, leans over and opens the back door.

The Arab asks him : "What are you doing?"

Laundry Rule #2:
When it is raining, drop everything (except the Kids or the Atomic bomb) and rush back to the house. Cry like a baby who lost their 5 inch sticky lollipop to the hard tile. Then resolve never to do laundry again until someone gives you a 10,000 Megwatt Dryer which can dry your clothes in a fraction of a second.