This was supposed to be a very fast installation but in the end, it took three days. On the first day, I delivered the system from the dealer. And after discovering that the wall is not concrete but plasterboard, I did not have the necessary anchors with me and had to call it a day.

And on the second day, while I was halfway installing the system, with already four holes being made, the cable guy, who was watching me the whole time, finally spoke and told me to ask the customer if that is the place to put the system. WTF....... he had already laid the cable there and now this crap. So what if the customer wants to have a table under it for his staff to have meals? Apart from the male staff, those cute ladies can be said to be on the borderline of being recognised as one of the Seven Dwarf's wives.

Just to humour him, I asked the customer about it and now, the customer really wanted to relocate the system to another spot. Which really pissed the cable guy off as he would have to relocate his cables for me as well. Stupid dumbass should have kept his mouth shut. 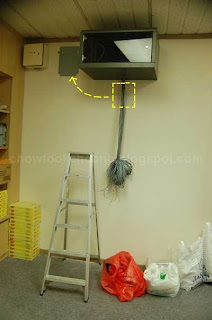 And so, apart from a Basketball player,
no one else would have problems at the
pantry table. Still, with the server rack
hanging dangerously at an angle (you
can't see it from here), no one would
even dare to eat under it. The yellow
dash says move the system elsewhere. 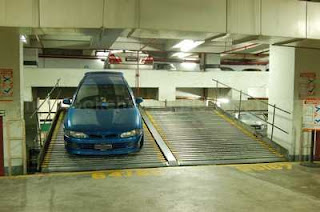 RM7.50 for less than an hour. Still, I get to park
on this weird ramp. One push of the button and
your car would go up/down so that another car
can share the same spot. Boy, it was hell on the
reverse as I have to make sure I do not do it too
far back......... 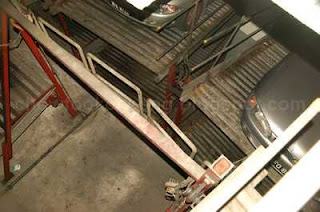 Because if you did, well, the drop would screw up a lot
of other people's day, if it wasn't already that bad. 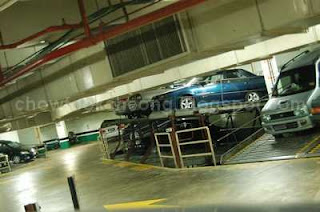 Somehow, being in this parking lot is like being in an
Elite's junkshop. Still, it was circustances which made
me try this out for the very first time. 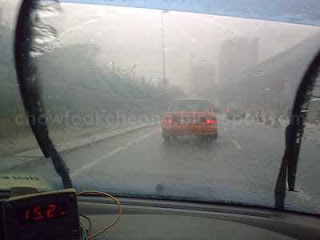 On the way back, I just remembered that my Satria's air-cond
is not working and so, the whole windshield is misted up and I
had to do a lot of stuff to make sure I can still see the road
Date: Thursday, April 09, 2009 No comments: Links to this post

Where did you say the System was?

When I visit a new customer for the very first time, I have to be mentally prepared for things that might disturb me. The moment I step into their office, my Engineer mind takes over and this might be a bit of a problem. For you see, when a system has been installed, the installation must follow a set of Rules. And after that, when a technician comes to service the system, they too, must follow a set of Rules. Not doing that would mean they are not disciplined enough and would face my wrath.

Fortunately (for them), I have since resigned and now, I have to be more aware of my surroundings and compromise. And so, this brings me to today's customer. I am not sure about the details on how this system was installed and I do not want to disturb my tech since he is on MC after falling off his bike. But I was not happy with what I saw..... 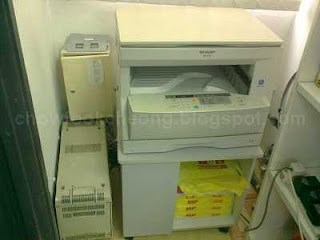 Hidden in a corner next to the toilet entrance and squished
by the Photcopier, is the system. And on the opposite side
are the shelves, just about three and a half feet away. Which
is not a lot of space to work in. 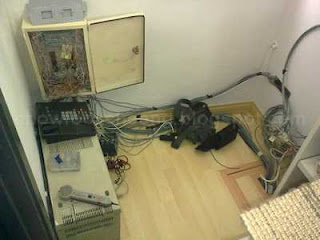 Once I have removed the Photocopier, things got a bit better
but still, its not easy to work with the system so low. After I
sat on the floor, it was not a comfortable environment, which
increases my grumpiness. (Ha ha ha) 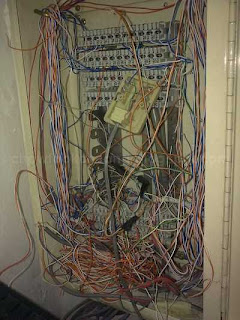 And if I did get the chance to find out which idiot did this,
I am going to give him a nice lecture, after I punch him in
the face, that is. 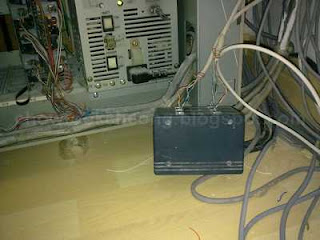 The system is barely an inch above the floor. I complained
to the customer and he said the installer did it. He was
quite flippant about it until I pointed out the dangers
of installing the system in such position.

[Update 14.04.2009]
My tech informed me that the system was not mounted by him as he only connects the cables and terminated them. As for the messy cabling, I am guessing its another party who installed the auto-dialers and messed up the whole box.
Date: Thursday, April 09, 2009 No comments: Links to this post