When you need certain things in Malaysia, I can bet you that, sure as heck you might not be able to find it. Even if you did, the normal response is either, "Sold out" or "Hah?" (As in I don't know what the Hell you're talking about). This time, it was those itty bitty 1/100 scale figures which I needed for my Gundam Ball model kit which I got it some time ago. (I know its not going to get finished but I still would like to try, OK?)

The model kit was a 1/100 in scale and this means that the human figures would be 16mm tall. Apart from buying more Gundam Figure kits (which would be both expensive and silly), I really have to look for another source. So, I went to a lot of Hobby shops which, unfortunately, did not carry such items. And that was years ago. Then, after looking at some architectural models, I got some leads to a few model shops that catered to, Hobby trains. The ones I went had a few problems: Either I buy the whole pack (RM198) or not at all.

Then I came across Dai-Kong trading via the Internet (huh?) and luckily, they did sell what I needed. And this time, they allow me to buy in separates (where they open the box and re-pack them into small plastic bags. So, for a pack of 13 figures at RM24 (which works out to be about Rm1.85 per figure) its much economical. But this time, I was attracted to the 1/87 figures (19mm) instead of the 1/100 (16mm) due to the pose.

Anyway, if you need to go there, here is the address:

I don't have the map but if you're coming to Loke Yew traffic lights (from Cheras), just go straight ahead after the lights. About 200m, you will see a pair or Petrol Stations (Esso then Shell). Turn Left after the Shell station into a small road. You may start to find some parking here. At the end of the road, you will see some Mamak stalls on your left. Turn left and the second shoplot (or just right in front of the Fire Station's Gates) is Dai-Kong trading. They have just moved in adn there is no signages yet. 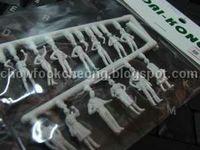 Here are the figures I got for RM24 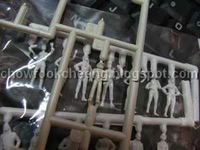 The Gundam is 1/100 scale and the figures are 1/87
Ok, so I can say he's just a little kid in Space Uniform with the grown-up girls behind him