And I am supposed to work half-day, no thanks to the same moron who was pulling the cable. We made him promise to complete it by yesterday and he promised us that it would be finished by 5 in the evening. Tough luck because not only did he not keep to the schedule, he was late by one day.

So, this morning he had to start again and the customer was not pleased since the office was not opened on Saturdays. In the end, it was completed slightly after 2:15 with lots of embarassing door opening incidents and I had to rush back because my Wife told me that there is no one to buy lunch since my Dad has gone out with her car to fix the air-con. My Wife threatened to drive my Dad's Volvo 240, which set me into panic mode because a lot of people could get killed even before the car could clock an extra kilometer.

That is the problem with local contractors. They can promise you the whole sky but when it comes to the crunch, its a diferent thing. Worst is, because of their thick-skin (or stupidity) and greediness with other simultaneous projects, the customer is the one who loses most. 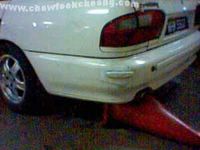 On the way down to monitor him at the basement, I discovered the reliability of a Proton reverse sensor 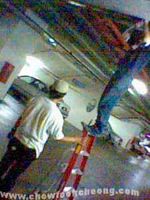 There he is, and unfortunately, all the cars missed knocking into the both of them 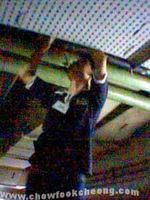 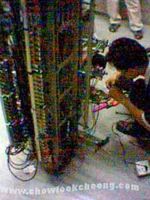 Here in the MDF room, he is completing the last leg of his job, by soldering the connector. 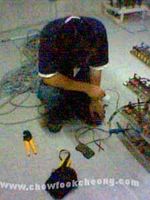 "I give up!" Well, nearly because he could not find the signal and thought its faulty

I love the T630's silent mode when taking pictures because no one noticed me doing it.
Date: Saturday, March 05, 2005 No comments: