Today was the second and last day for the job and while working, I heard a lot of excited arguments between the contractors because of last minute structural changes. This would mean all the perfectly laid cables (Network, Voice and Power) in the ground would have to be torn and relaid again. Because the carpets have already been placed, the only solution would be to install trunking on the walls which would be quite unsightly when compared to the Office design. Yeah, as usual, we left at 2200 as it is much easier to work after office hours without people bombarding you with questions and "ordering" you around.

I am quite alright with it because I am used to ignoring people and giving htem the funny look. The real danger in following customer's requests is that you are overriding the PIC's (Person in Charge) instructions or planing and this is not a good thing, expecially when some requests involves costs or conflicts with their office process. 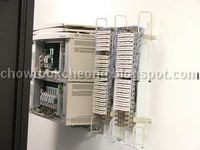 OK, the system is fully wired up and remaining extensions are completed 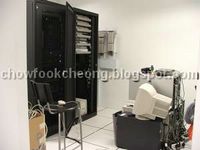 The Network guys have moved in more of their stuff too 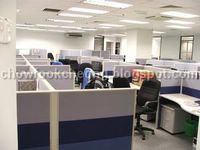 The Office is completed and unfortunately, the were some last minute changes
Such as tearing down some partition walls
So, we will have to comeback again for reprogramming and new cabling.
This will make the wall and system cabling messy

Coming into the office today, I was told that the platform guys would be in to install and erect the platform at the back of the office. This means I would have my own office soon. 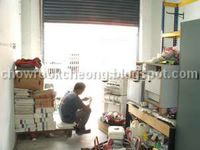 They have been clearing the stuff since this morning and the platform guys are going to install the beams in the afternoon. 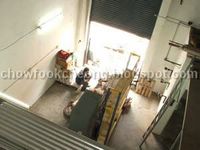 This is the before picture

After treating my in-Laws to a dinner they decided to go shop for some groceries. Since I had nothing to do, I decided to look for alternatives to Neslo. The first option was to buy a Milo 3-in-1 or a Cadbury's Chocolate 3-in-1, and then mix with Nescafe 3-in-1. But then, all the sugar from the two pack might either kill me or make me hyperactive and start to make stupid corny jokes. Then my Wife might kill me. Either way, I would still die.

So, the next choice was to get a bottle of Cadbury's Hot Chocolate and a bottle of Nescafe. But then there is the problem with price.

When I was about to leave, I saw this nicely decorated pack called Chococino, "The true Italian Cafe Instantly" made from some place up North in Alor Star. When I looked up their website, I was not happy because of their "Injoy" logo which uses the same font as another brand. (More on this later). And as far as local websites are concerned, it has a lot of nice flashy stuff but no contents. Just look at their products page which has no photographs of their products.(So that I would know which packs to avoid/buy in the future. Ha ha). Perhaps, methinks, they have spent all their budget on the Flash Intro which showed the products too fast and I had to replay it over and over again.

Anyway, since it was put between those foreign weird coffee powders and the local ones, I decided to have a further look. So, its time to give the local boys a try. This also means, it might be a Neslo replacement!

So, after getting home, I decided to make a cup. What came out of the packet did not smell nice at all. The ingredients lists sugar, non dairy creamer, dried skimmed milk, cocoa, chocolate, malt extract, lecithin and stabilizer. (Stabilizer? What the heck...?) And I can't find anything that said coffee. Then again, I was still thinking about Cadbury's Chocolate's and Nescafe's sweet aroma.

And I can tell you this. The drink tasted more like cocoa with some weird stuff in it than Neslo. Perhaps I was better off with the Nescafe/Cadburys mixture. Maybe when my pay is in, I'll get the Cadburys and then one of those foreign funky coffee powder like from Blue Mountain or something.
(No, its definitely not Blue Nun which is a whoo-hoo drink)

Oh well, there are still 11 packs left. Anyone want some? 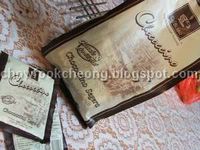