Hello, can you read me?

I am so used to typing on keyboards that when I need to write something on paper, there is always the problem of its readability. I am a little bit concerned when it affects other people because this means I cannot get my message across. But lately, I am even more alarmed when I myself could not even read my own handwriting. That's how bad the situation has become.

I am so used to just typing everything, when it comes to writing even the simplest of sentences, it is quite a chore. And yes, it also turns me into lazy mode in just a few words. When I was young, I loved to write, not because of anything but the idea of writing words as small as possible using a ballpoint pen with the finest tip was very appealing to me.

The funny side of all this, although most people still cannot read my own writing, I can, most of the time, read those that cannot be read. 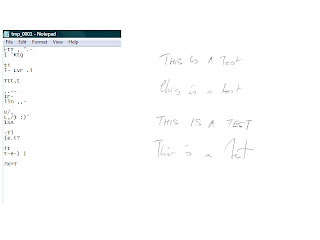 As a test, I decided to get the scanner's OCR to
scan and process my handwriting. The result is
so sad....
Date: Wednesday, June 22, 2011 No comments:

I was on the way to visiting a customer when I passed by the Kenanga International Building. What caught my eye was this display of the new Land Rover Evoque. Its a very imaginative way of displaying a new model without having to show the whole thing.

The outline of the model would create a sense of curiosity for those who really wants to see the model when it really comes out. Either that or they do not have the car yet.

Anyway, which brings me to another topic: Movie Trailers.

When there is a new movie coming out, you would soon know about it because of the trailers popping up all over the media. However, in Malaysia. its irritating because the same trailer pops up every commercial break. Its as if they think that by doing this, people would flock to the cinemas and trampling the Pirates at the same time. Right, yeah.

I have not been watching TV for years now, and if there is a new movie, I try not to watch the trailers since they would make or break the movie, in my case. There is an unofficial rule of thumb here, which, to me is an indication when a movie would suck when the trailer has 'too much' exploding or fighting scenes. And if there are multiple trailers but with one or two repeating scene, deep in your heart, you'd know it. For all you know, these could be the best scenes in the movie. Gone were the time where trailers were specially made to keep you interested for weeks at a time. Nowadays, everyone expects the trailers to lift scenes from the movie instead.

Yep, sucks doesn't. And sometimes, a trailer is so 'revealing' you'd know how the whole movie ends without ever having to go to the cinema. Notice how I did not talk much about the car but moved on to another topic? Yep, because apart from the display, there were no other source of information on hand. And if I were to use my memory, like any other passerby, by the time I reached to a place where there is Internet, I would have already forgotten what it was all about in the first place. 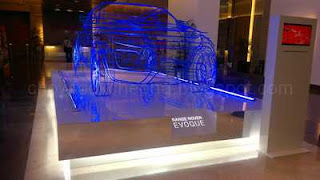 This is the new Land Rover Evoque on display. For
those who are not familiar with this concept, this is
the wireframe version for people who wants to be
noticed. 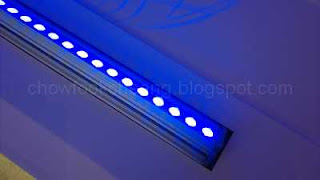 And this is how the wireframes were highlighted.
Blue LEDs from the ground. 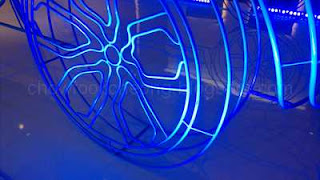 I don't know about you but I don't think this
skeleton version is going to sell well...
Date: Wednesday, June 22, 2011 No comments:

What's a few sens, you ask? To some, its just spare change from recent purchases. To others, its just coins. But to a select few, especially MAKNA, it could mean a difference. True or not, with so much news about charities, its up to you to decide. I was given this by one of my customers. Its a paper coin box which you fold it yourself. Once it is full, you can hand over it to one of the Maybank counters. 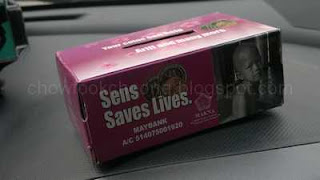 I usually give it 20 sens from the change I get
for every toll that I pay. At the end of the two
months, it was full. Wow.

What I was not amused was when I handed in my first MAKNA box to a Maybank counter in Menara Genting, the staff looked lost as if he does not know what to do with it, even after I told him what it was for. Does this mean Maybank is just doing lip-service when it comes to charities? The staff showed he knows a lot about the banks procedures. Except this just one; the MAKNA paper coin box. I was not even given another one but had to make the trip to see my customer just to ask if she had anymore MAKNA boxes.
Date: Wednesday, June 22, 2011 No comments: