I know it's a Dream but our felt so real because I was out shopping/walking with my late Mum. I think we were at the old part of Bangsar Shopping Centre where I spotted a small comic or bookshop shop that has was not lit. Using the lights from the building corridors, I can make out some books on the shelves but could only make out the presence/shadow of the Sales Assistant at the Counter.

My late Mum pointed to a shelf and my eyes followed her finger. It was the Star Trek: The Next Generation Technical Manual written by Rick Sternbach and Michael Okuda. The strange thing was, it was shrink wrapped and there was a big dark bluish sticker on it, with the printed words, 'Reserved for [My Name] in purple. As if it was a label. The other copy was the same but for another customer, I assumed. The funny thing was, it looked like those Japanese labels on books/magazines with a lot of smaller wordings underneath as if they were actual labels.

I used to pore over the manual as if it was a real textbook and learned all the facts by heart. Nowadays, I've completely forgotten about it.

You can only be a kid for so long… 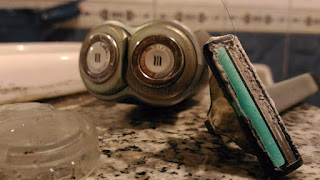 Being a kid was fun until suddenly, you realise that a lot of things have started taking up residence on your face. And it’s not just about pimples looking for a place to stay. On no, sir. Just overnight, tiny hair/weeds started to sprout in areas where, to a kid, they have no business to be there in the first place. And so, like any Father to Son tradition, I got a shaver.

Actually, at that time, I was already panicking since the only time I’ve ever seen grown adults removing these facial hairs were either getting shaved by a barber (that would cost a lot of money) or using a big long knife like a cowboy (wah, so macho!). Unfortunately, as my day-dreaming subsided, I realised, what I held in my hands, was a battery-operated lawn mower.

As decades replaced years, I was always mowing my face. Come to think of it, it’s convenient and very safe. Because at that age, I was a walking disaster to everyone when it came to sharp objects and I hate taking shots. With the battery-operated shaver, I can trim the hair to any pattern I liked and more so, with the sideburns. Fast forward three decades later, my safety net disappeared.

Yeah, smart le me accidentally shipped the shaver’s charger back home and forgot all about it.

And so, my descent into adulthood more or less became a slippery slope. I had to decide whether to grow a patchy beard or get another shaver. I decided to choose the latter since I look weird with a bad wig on my face anyway. In the end, out of desperation and running out of weed killer, I grabbed a normal shaver at the Supermarket. Normal as in two pieces of sharp blades stuck on a swiveling handle. It has no motors, is always ready 24/7 and does not need hours of cleaning. Unlike my extremely aromatic shaver which needs to be recharged and de-haired every now and then. Yeah, hours of fun with the cotton bud guaranteed.
In theory, I know how to use a razor as I’ve seen them in advertisements when I was a teenager. I mean how hard can it be? You just lather up your face with some soap, drag the razor upwards and you’re done. OK, so there will be some blood but nothing manning up won’t help.

Then, very quickly, my Wife has taught me what shaver foam is.

Even quicker, I now know what razor burn is.