So, in Star Trek Nemesis, in the scene where they start handing out the Type III Phaser rifles, you can see two Starfleet personnel checking the rifles as it was being handed out to them. One is opening the slide which contains the power cell or something and the other, pressing the left button where the leds light up in sequence from left to right. So, I think this powercell thing started from Star Trek: Enterprise's Phase pistols and so, they have to carriy this over to the present future (hah?). Even the Type II Phasers has it.

Since we do not know how the rifle works there were theories from sliding the cover as if to "load" the rifle to pressing the left button to "switch" it on.

So, the debate is still on.

Personally, my theory is this:
1) The sliding of the cover is nothing else other than to check the state of the rirle's charge
2) Pressing any of the two buttons (left or right) would bring the rifle out of stanby mode 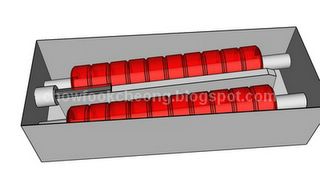 This power cell is created from Google's free Sketchup software
Just find 20 5mm x 10mm trnapsrent red beads, slot them into metal
rods and use four high-brightness LEDs to ligth them up, pointing to
opposite directions. However, these are all guesses as I am not sure
if anyone has seen the real prop and taken measurements