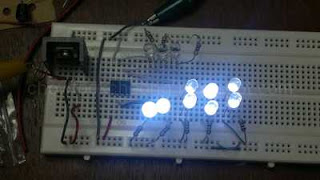 After the fingers have healed and the trauma hassubsided, its time to go back to this %#@$ board.Only problem was, I forgot what's its all about.Any ideas, Bruce?
Date: Sunday, July 31, 2011 No comments: Links to this post

Hmm..... that was fast. The shop called and her glasses are now ready. And so, after getting into the usual routine of lunch and all, we went to the shop as fast as we could. Yeah, we're all excited as well. 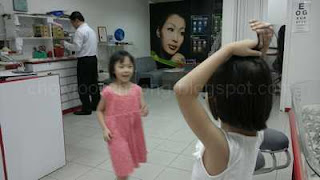 While they prepared and cleaned her glasses, the two
girls
were at their usual self, running around the shop
until I
have had enough. 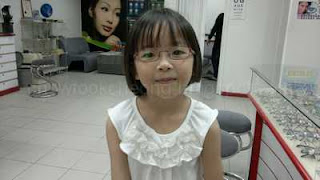 Ta-daaaa...! Krsitine's new glasses.
If I am not mistaken, this one has spring loaded
arms so that when or if she was knocked, they
would not break or snap apart. 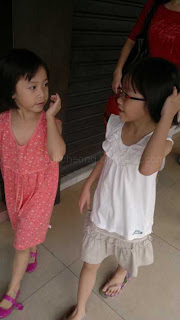 All the while we were walking
along the row of shops, they
were busy chatting about, in
their own World. Funnily
enough, during my time, I'd
walk slowly to adjust my vision.
For Kristine, it was just normal... 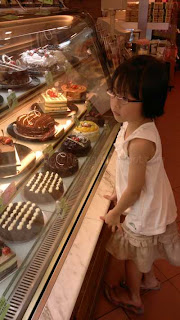 And finally, I guess, she can now see
clearly on the things that she could
not have....

Nothing special happened today except that there was nothing exceptionally happening today. 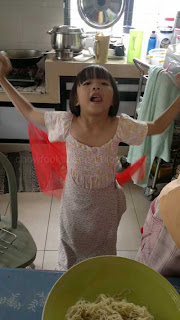 Kristine used Kaelynn's 'Blankie'
as her skirt for a skit. 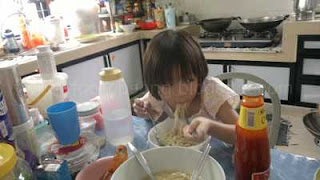 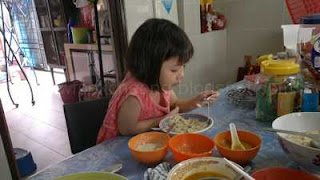 The I noticed Kaelynn got 'bigger' all of a sudden 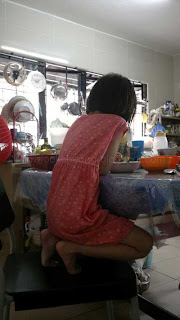 While on a Family outstation trip, I came across this little nifty toy gun. Looks nice doesn't it? For those who are more familiar with this design, a light-bulb would have exploded in your head by now.Yes, this is a NERF Element EX-6 Kopykat. What they did was, instead of copying it 100%, they stuffed electronics into it and made it into a non-firing toy. Perhaps its to circumvent Copyright issues, I suppose. But its still easily recognizable. 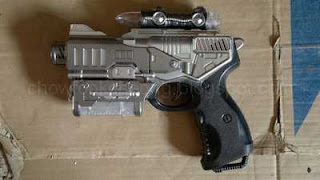 And so, this is the KopyKat. Which, if you have
never seen the Real McCoy before, you would
say that this is a very cool toy gun. But if you
do know your NERFs, you'd still say, this is a
very cool NERF Kopykat. 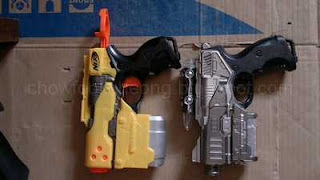 Side by side comparison. OK, so they are not
exactly alike but from far, it is still the same.

Each gun has its own 'specialties'. For example, the NERF Element EX-6 can shoot darts with an effective range of 20-25 feet and has a capacity to hold extra 5 rounds. Depending on the target, you either get away with it or, get NERFed instead. The KopyKat has a psychological effective range from 1 inch to about 50 feet. It annoys the target and depending on the 'kiddiness' in you, the response is either a broken toy, some choice red markings on the skin or well, complete social ostracization for hours. Also, the KopyKat has one more weapon up its shaf... er, sleeve, which is the horizontal thrusting rocket. It is a very deadly weapon because if aimed at the wrong target, you're either stereotyped forever as a child or in most cases, no Happy Hour for you tonight. 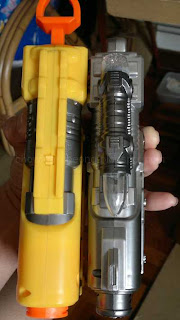 Maybe its the paintjob but I am
starting to like the KopyKat.... 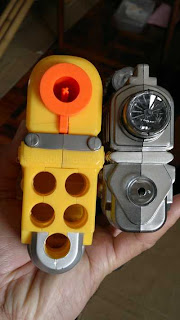 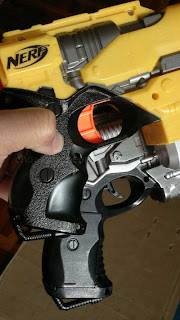 But I still have to admit, the KopyKat's
grip looks much nicer. And with the
battery compartment 'ready' its a
bonus for further modifications.


I only had the opportunity to obtain one instead of a few more due to the normal circumstances. But if I were to be given the chance to get them and choose between the two, I would definitely get both. Ha. Ha.You just can't separate a boy* from his toys.* - There is no such thing as a 'man', its just a convenient cover-up for embarrassing labels such as 'grown-up kid', 'stupid annoying boy', etc.
Date: Sunday, July 31, 2011 2 comments: Links to this post