Every morning, if possible, I would like to have nice cup of Hot Milo. And sometimes, I would like about one and a half teaspoon of condensed milk to go along with it as well. But now, for the moment, I have a 10 packets of 3in1 vanilla flavoured coffee which I would add to the Milo. And I tell you, the whole room smell of that vanilla coffee..... 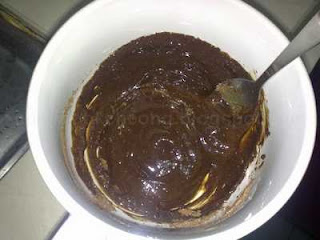 When I was young, I would just scoop the powder
into the cup, pour the hot water in and then wonder
why it took so long to destroy those floating lumps.
So now, I do the same thing except that I would go
and pour some few tablespoons of hot water into the
cup and then mix it with the powder. 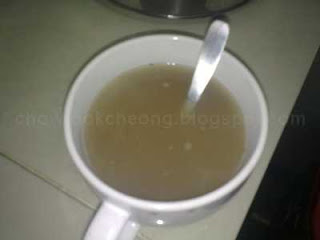 Once the gooey mixture looks good, you can
start to add more hot water gradually, just
to dilute it. Here, I made the mistake of not
diluting the goo and just topped up the hot
water. Yep, I have lots of undissolved goo in
the cup. 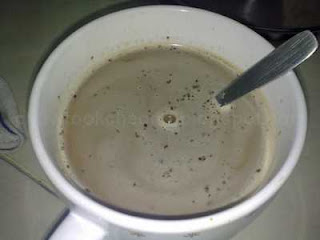 I had to stir and stir many times until all the
goo is dissolved. If not, you'd be drinking the
hot water which tasted like very diluted Milo. 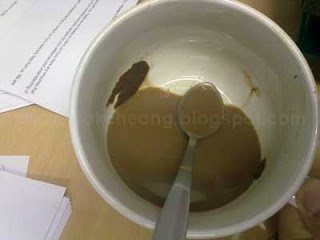 When I was about to finish the Milo, I can
see the leftover Milo on the cup. So, I had
to scrape them off and mix them with the
remaining Milo. If not, it would be wasted. 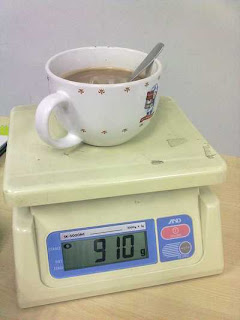 While I still had some time, I decided to
play with the weighing machine. With
everything in there, it weighed 910g. 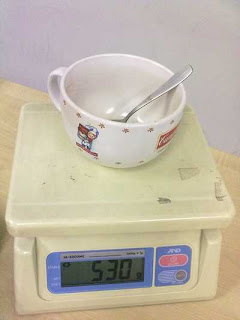 After transferring all the Milo to my
stomach, the weight was 510g. 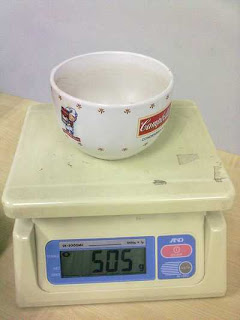 And after removing the spoon, the weigh
was 405g. So guess how heavy I was before
finishing the Milo?
Date: Tuesday, June 08, 2010 No comments: Links to this post