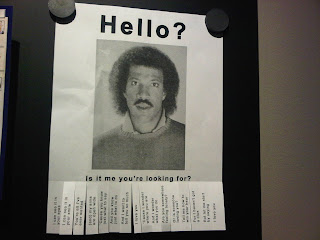 The image below was taken from The Gun Zone site. The image is actually of a flyer distributed in a town called Richmond which everyone thought it was the real deal. So much so that the Officials were upset with it.

The flyer is selling a new type of sights for a certain Glock guns. 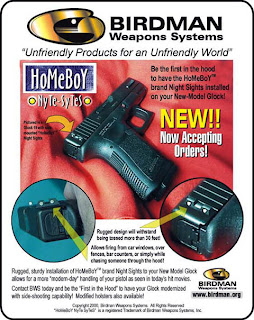 This is the hoax flyer. You might want
to click on it to see what its all about. 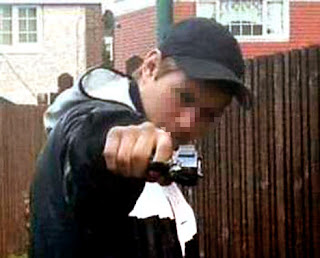 This is a list of Engineer jokes taken from A Moral Compass. Some of them are quite original to me, that is.

Two engineering students were walking across a university campus when one said, “Where did you get such a great bike?” The second engineer replied, “Well, I was walking along yesterday, minding my own business,when a beautiful woman rode up on this bike, threw it to the ground,took off all her clothes and said, “Take what you want. ”The second engineer nodded approvingly and said, “Good call ; the clothes probably wouldn’t have fit you anyway.”

A priest, a doctor and an engineer were waiting one morning for a particularly slow group of golfers. The engineer fumed, “What’s with those guys? We must have been waiting for fifteen minutes!” The doctor chimed in, “I don’t know, but I’ve never seen such inept golf!”
The priest said, “Here comes the greens keeper. Let’s have a word with him.” He said, “Hello, George! What’s wrong with that group ahead of us? They’re rather slow, aren’t they?”
The greens keeper replied, “Oh, yes. That’s a group of blind firefighters. They lost their sight saving our clubhouse from a fire last year, so we always let them play for free anytime.”
The group fell silent for a moment. The priest said, “That’s so sad. I think I will say a special prayer for them tonight.” The doctor said,“Good idea. I’m going to contact my ophthalmologist colleague to see if there’s anything he can do for them”. The engineer said, “Why can’t they play at night?”

I got this 'thing' while I was in Pasar Road in the morning. This is one of those dummy CCTV cameras which, as far as I am concerned, a cross between a novelty toy and well, a joke. So, in my own snobbish way, I completely ignore this abomination to the point, if it was just in front of me, I would not even notice it.

Then it all changed when I was discussing with rayloke of ICW. He is quite imaginative when it comes to securing resources and creating solutions to an otherwise complex and wall-banging problems. And so, for my project, the dummy CCTV was the only solution. Its cheap, salvageable and also fits my requirement. 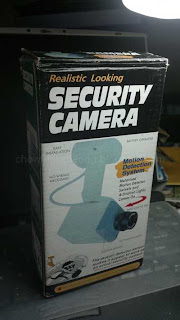 After searching for more than a year,
I have found it. The good news is that
it costs half the price on what rayloke
told me last year. 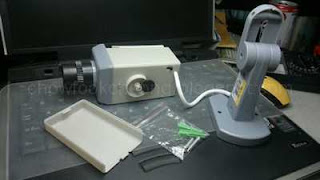 Opening the box, these are the contents to the
dummy. You need a screwdriver to mount the
dummy to the stand. Whether its a tongue in
cheek or as a serious thought, the manufacturer
also supplied some screws and wall mounts in
case you really need to install it onto a wall.... 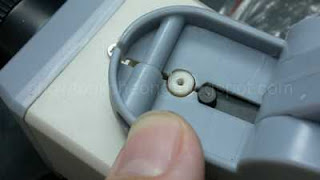 Gently is the word when you unscrew the screw
to mount the dummy. As this is a MIC product,
you know that the plastic is brittle to the point
of cracking. See the small black part through
the slots? This is the 'magic' part which made
the whole thing move. 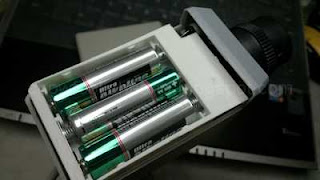 The dummy takes three AA batteries and I broke the
screw mounts under the battery case here. But not to
worry as I don't need them for my project. 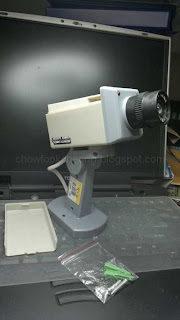 Oh, for my dummy, the neck joint
between the base and the mount
is very weak even though it has a
clickable joint. With the weight of
the batteries, any slight bump will
make the dummy droop. 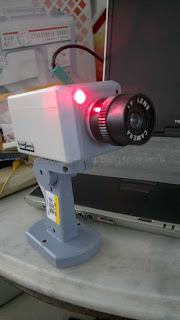 OK, once I switched it on, the camera will
start to swing at about 45º. I think if I do
enlarge the black disc, it might even swing
more. What is so clever about this is that
it has a light sensor located opposite the
red LED. As soon as it sense a change in
the lighting, it will start to move for a few
seconds before stopping.
(Actually, it detects light and not motion)

OK, fun's over. Now, lets open it up.
Remember the thick white 'wire' that comes out from the dummy and disappears into the stand? Well, fret not because that wire is a dummy too. Look closely at the photo below and at the bottom left of the picture, you will see how that wire was terminated. Anyway, the picture below is what you will see once you remove that fragile wobbly battery holder. After looking at it, I think its better that I do not do tinker much in this area. Not because I am afraid of screwing it up, but just look at the two plastic pillars in the middle of the picture. They are the ones holding hte battery compartment earlier, and have cracked when I screwed it back, even with the smallest amount of pressure. So, If I were to touch it even further, its going to be in pieces. Also, look at the bottm right of the picture, which houses a small little circuit board. This is the brains of the whole dummy.

As soon as it sense the change in the light dependent resistor (top left), it will start the motor and also blink the red LED (top right) for a few seconds. The problem is how to turn this to an advantage when you place the thing in a bright room? 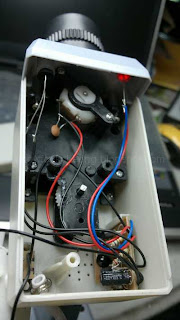 At the bottom of the box, you can see a
set of holes, which is meant for a speaker.
Maybe there was another model which'll
talk or make beeping sounds... now, that
would really make it corny. 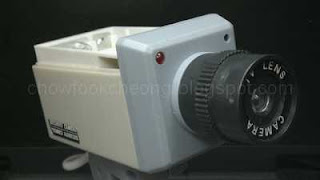 Already, I have ideas for the 'lens' 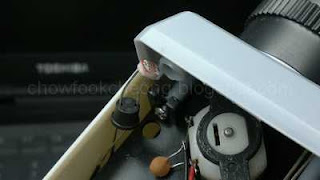 And this is the light dependent resistor sensor,
which for my project, will be relocated to another
place.

So, this is a wonderful surprise for me and I am ready to implement this for my project. It will be very exciting and unique indeed. That is, once I have the time or opportunity to do this. Until then, its going to the 'to-do' shelf...
Date: Saturday, March 17, 2012 No comments:

The package arrived to the house today, and as soon as the postmen delivered it, I quickly took it and opened the envelope. It was a bit risky redirecting the delivery back to the house because if the postman delivered it when no one was at home, this would mean going all the way to the post office to collect it and usually, it is the day after. So, for a person who is impatient, this is a hassle. 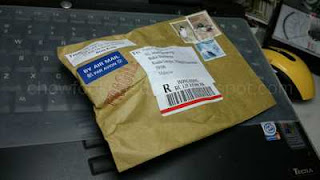 And so, the package arrived just after 16 days,
which is quite fast since its from Hong Kong. 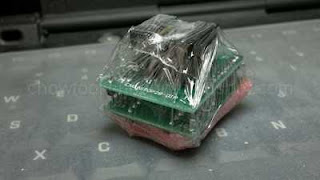 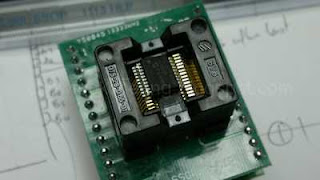 And the SSOP chip still does not fit!
WTF. Oh, Come On!

And so, this is very disappointing. I am now left with 20 SMD chips which cannot be fit into either adaptors, and even if they do, I still have to make another adaptor for the adaptor. Why? Its because these damn chips are 20 pins as the manufacturer added two extra pins and if I plug this straight to the programmer, I am going to end up with useless chips. So, I am not going to spend anymore money on these. I have no choice but to shelf it away until there is a more suitable time for me to look into ICSP (In-circuit Serial Programming) properly. Moreover, because its so small, soldering is going to be a problem too. Sigh. Wasted a lot of time and money for this.

And due to time constraints, I could not meet up with my friend for him to get the boards cut into shape. I can cut them but because of the odd shape and the board being fragile (as in brittle-ly fragile) , one wrong move will result in them crackling or breaking into two. Sigh. More time wasted. I think the rest of the International community have theirs done by now.
Date: Saturday, March 17, 2012 No comments: