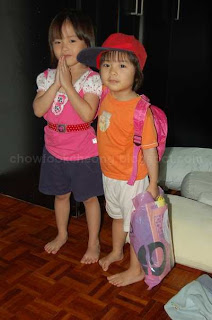 The girls in one of their costume fantasies...
I am not sure what they're supposed to be
but Kaelynn looks like a young Kindergarten
student.

OK, so both of us are not suspended anymore. Boss retracted the letter and asked us to fill in for two day's Annual Leave instead. Everyone was facing a lot of stress at that time and it was my actions who sparked the dynamite even though it was intentional. But well, let's put it behind us. And best of all, the van has been found too. It was not stolen but you know why, la.

Anyway, we got our bonuses today and because of the time factor, my Boss got me to cash it straightaway instead of putting it into the bank account. If I did, I would only get it after the Chinese New Year. 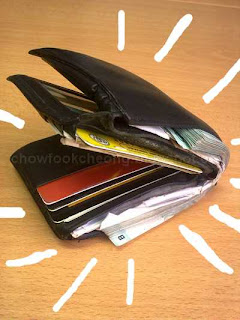 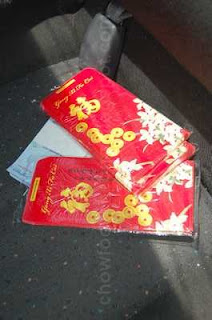 While I was in Seremban, I decided to
change some of the bonus cash to new
notes. But because they ran out of RM5
notes, I had to settle for RM1 instead.
The girl was kind enough to give me
some ang pow envelopes 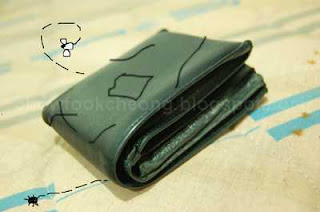 Today was the third time I tried the GPS function. And there was no success. Frustrated, I left the Nokia 5800 on the window to scan for the satellites. The screen shows the usual satellites in orbit..... 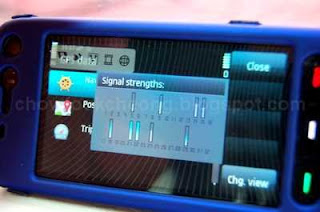 Then suddenly, the satellite signals went from white to blue. So,
this means white bar means there are satellites but now enough
signals. Once it turns blue, I guess it could lock on. 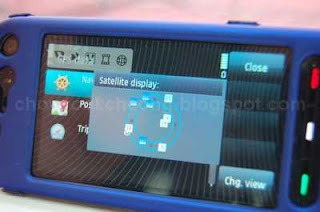 And I was right because after I changed the view, all the GPS satellites it could detect suddenly came on. I am not sure about this reading (because I still have not read the manual) but once I see this screen, it means the
GPS is read. After a few days, of trial and error, I noticed the following:
1) You cannot use it indoors (duh)
2) You cannot use it where there are tall some buildings nearby
3) You need a few seconds for it to lock on to the satellites
4) You get poor reception in a car with window tints
5) You can get summoned 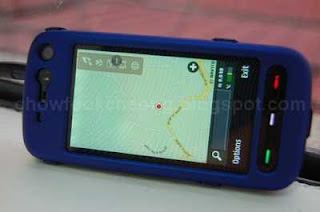 And so, I am happy now......
And the GPS is quite acccurate to, I think, within a few metres.
But there was one time it pointed me as being in Shah Alam
instead of me travelling around Bangsar. Heh
Date: Wednesday, January 21, 2009 No comments:

I have been to a few shops (OK, only one) and they do not sell any additional protective casing for the Nokia 5800 because, knowing me, the phone would either be dropped or scratched in less than a week. And so, five days ago, I bought these casings from eBay for less than RM22.00 (plus postage) in anticipation for such thing that might happen. And if I was not able to get the Nokai 5800, I would have wasted the money for nothing. Luckily, instead of taking more than 10 days (I mean, who is going to be there when the postman comes during Chinese new Year?) it came just in time. 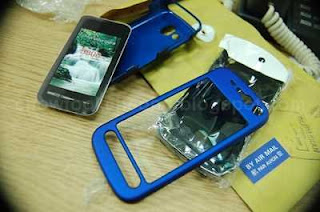 And so, here it is, in front of my table first thing in the morning!
The casing was in black and also in blue. I decided to use the blue
casing first. It has a very nice colour and its just a matter of days
before it gets its first scratch. The blue has different shades as if
they added a drop of pearl colour in it. It f it was green, it would
be same as Nokia's Matrix 7110 phone when it came out. 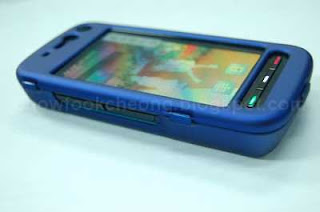 Just like those crystal cases, this is just thin plastic with very nice paint
applied. And it clips the two halves via plastic tabs. All nice and cool, right?
And it wraps the quite closely as if its the second skin I was so impressed with it that I forgot about the "Hey, wait a minute
moments" until I started to use the phone. 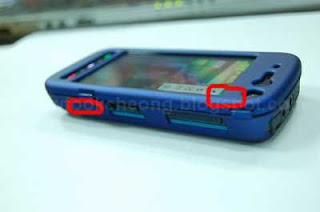 So, when I wanted to listen to the MP3 player or use the camera, I noticed
the buttons have disappeared. Hey, wait a minute........

Yeah, the casing have completely blocked them. I think when they got the
phone prototype, they were unaware of the buttons, especially the touch
sensitive media button near the fontal camera. So, the only way to get around
this is to place shortcuts on the screen. Which is no biggie for me since I wanted
to do this as I hate to press the middle button to access the SMS function.
But for the camera, I think if I cannot stand this, I would have to cut out the
hole myself. And knowing me, it will be badly scratched. 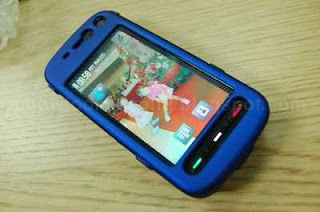 Although the casing was stated to be of hard rubber, I did not notice the
rubber but the paint coating on the casing is very slippery despite its
non-reflective sheen, which should be having rough surfaces. In theory, that is

[Update: 21012009 23:52]
OK, I used a drill bit, some coarse tip and made some improvements via a rotary tool. All done except for the media button which I am going to leave it alone. 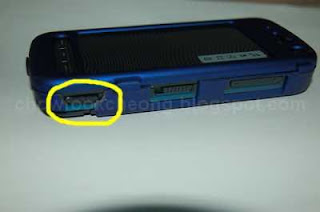 This is the cacat part where I screwed up. When I put the
piece in my back pocket, it disappeared when i reached
home. So, I have to make do with the error. 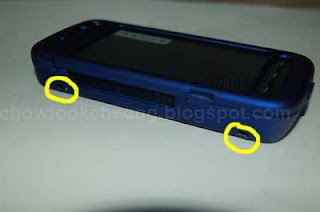 Two holes here for the speakers. Now the music coming
out sounds much louder and more solid. Yay!
Date: Wednesday, January 21, 2009 No comments:

And so, the best laid plans have gone awry again. This morning, as we were preparing to go to Seremban, there was an urgent call from one of our customer in Sitiawan. Apparrently, they cannot use the phone at all. After some filter questions, it was declared as "System Down" and so, I had to respond as fast as I can. By rearranging the service calls for the day, I was then free to go to Sitiawan to attend to this problem. And if my timing is right, I will get my rewards for the day. 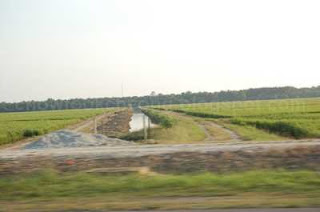 It is such a great day today, minimal clouds and a bright Sun. But since I
was in a rush, I could not stop to take any photos properly. I could try
on my way back byt by then, the Sun would be setting. 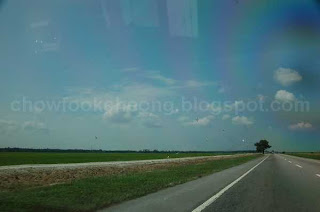 One of the impromtu shots which I liked. Too bad the car was tinted as
you can see the "rainbow" effects on the tints caused by my polarised
filter which I was always too lazy to take it out. Yeah, the were a flock
of birds flying across the road. 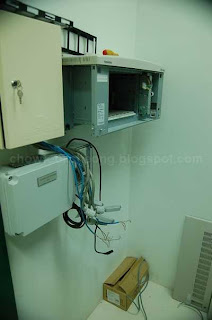 This is the system which has gone kaput.
I forgot to take the initial picture as I was
too busy to start the work. Its a race against
time to get the system up as everyone was
waiting for the phones. 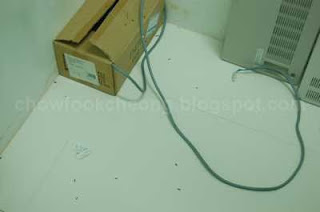 Apart from electrical surges, I am not sure what was the cause except
for the gecko dung all over the floor and inside the system. It stank up
the car when I was bringing it back for diagnosis 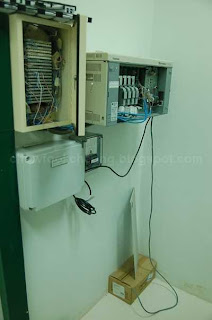 I had to use the replacement system for them go at least make
partial use of the PABX. Since the system was a bit smaller, they
lent me a drill to make extra mounting holes. It was not easy to
make a hole in the wall with a normal drill instead of a hammer
drill. At least they have 48% usage on the system. Better than
nothing, I guess. 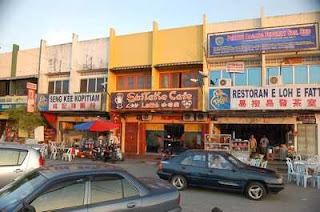 And so, my timing was right, I get to stop by the Chee Cheong Fun place
and placed about 15 packets for myself, my Boss and AlanTam (aka eggtart) 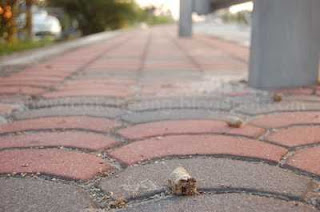 Everyone was laughing when I took this shot. I was bored because waiting
for 15 packets of chee cheong fun is quite a long time as they had to roll it
into the machine. 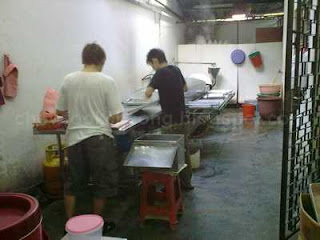 OK, after 15 minutes, its almost done. They're still using the machine to do
the stuff. I think business is picking up for them again as there are some
new staffs and more stalls renting in the shop. 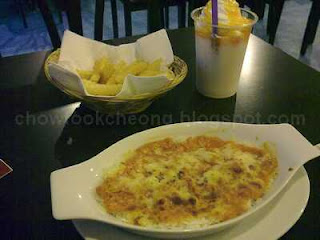 And so, I went into the Shitake Cafe. I ordered the
cheese rice called Asian something (RM8.90), a helping
of chips (RM3.50) and a Mango Vanilla shake (RM5.50).
I tell you, although the rice in the menu looked nice,
when it came out, it was dry and the thickness of the
rice was about 1.2cm instead of 1 inch as shown in the
photo. Haih. And I don't want to know how much the
shitake mushroom dishes would cost. 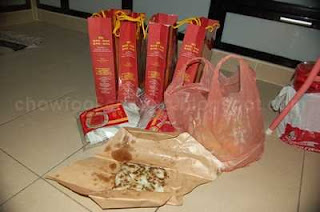 Ha ha ha ha ha! AlanTam's Bak Gua and the chee cheong fun!
He says next year, might have new Bak Gua recipe, and that folks, was my reward
Date: Wednesday, January 21, 2009 No comments: