Well, after fiddling around with my Sony Ericsson T630 at a customer's toilet, I began to realise why a lot of people would prefer not to have camera phones around..... 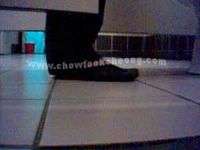 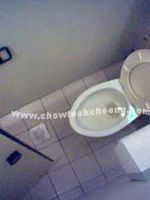 This is the shot from the cubicle on the right 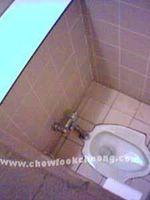 PIcture026
This is the shot from the cubicle on the left 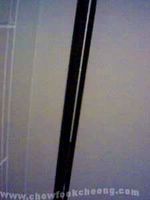 Horrors of Horrors! My cubicle door is actually warped, and outside people can see me.... 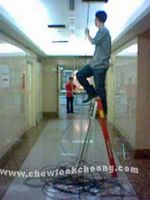 Sigh. I can't switch over customer's PBX because this moron was one day behind his schedule. When I was there, he had started on the ISDN cabling on the floor and has yet to complete the other end at the Basement........

First of all, let me tell you about a very special van. Its small, and is usually used by small traders to carry various goods. Because of its high torque, it can accelerate very fast when there is nothing to carry inside. Also, the van is constructed in such a way that the driver's seat is after the front wheels. And it has an amazing turning radius. If you're not used to sitting in the front when it is turning and squeezing at tight corners............. heh.

But best of all, it comes in various shades of white, from bird-shit to urban dust to decade-worn white because no one bothered to clean it. Maybe you can tell how old it is by the layers of dust stuck to it. 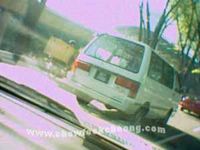 So, when you have an impatient and reckless driver (or a racing fanatic) behind one of these, you'd know what to expect.

Take for example, this morning. At about 9AM, I was near the Jalan Kepong/Jinjang exit. There was this white van speeding out from a T-Junction, and you can see that it nearly hit those orange divider, which looked more like torpedoes (I know, I know, lets not be so phalusophical). Anyway, this scared the heck out of the Kelisa driver in front of me, which, by natural reflex/panic, he did an emergency brake. As I was following the 2-second rule, I stopped about 2 feet away, no thanks to some rubble on the road. 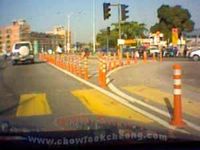 Crime scene revisited. The incident took place just near where the Pajero is. The van in question was on the right of the dividers 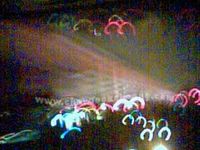 And this is how it looked like when I took this at night. Ha ha ha ha

We continued our way, and I decided to peek to my right, who this stupid van driver was, and at the same time, signaled I wanted to go into his lane. And that was it, he either thought I was challenging him to a race or he got insulted that an ugly fat guy looked at him.

So, thus began the moronic race. He kept driving very close to me, for whatever psychological reason, I do not know. There are two train of thought to this, and neither of them met half-way:

1) He thinks that by "pushing" me, I would speed up and he can then go faster, and he can tell his passenger, "See? I am more powderfool and oh so macho!!"

2) He thinks that its funny to "scare" me like that

Suffice to say, I succumbed to his tactics and forced an Emergency Brake on him instead, with the obvious result. Not satisfied, he began chasing me again.

While he was chasing me, I did not speed up but continued at normal pace. This time, he got even closer behind me and started to communicate in Morse Code with his head lights. So, once again, I pulled another Emergency Brake, this time with a slightly longer braking delay (which is also riskier), which resulted in his tyres squealing.

So, we're now at a three lane stretch and with a lorry in the middle, he tries to cut in front of me. Even with my raped car (I'll tell you in another story), I can still prevent him from cutting in. Yes, there is another bad side to the van's performance, which is, speed. It has the torque to rocket launch the van but not enough to sustain it. And the noise of the engine. My God, it sounded as if it was being tortured. You'd know that sound, a high pitched "Whhoooooaaaaaaaaaarrrrrrrrrrrhhhhh". If it the van was alive, someone would have put it out of its misery by shooting the driver.

And I can see steam coming out from his ears. Again, he is behind me and just about 30 metres in front, would be where I am to exit. However, there are already some cars queueing at the lights and luckily for me, there was a gap at the outermost (read:Most right) lane which I quickly switched to. The driver was not too fast and had to contend with horning me from a distance and continued his way.

And throughout the whole morning, my hands were shaking, no thanks to the adrenalin which has not cleared the system. You'd think I was high on caffeine.

You know, after a long tiring day, its nice to come back home. I was surprised when my Wife told me that Kristine was not in a good mood until I came home. She was slightly grumpy the whole day and did not smile until she saw me. From there on, her mood changed for the better. Does this means she misses me? 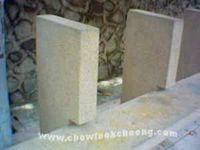 What's this? An outdoor toilet to be completed? 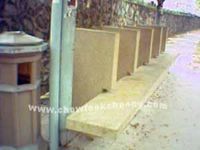 Nope, its a Bus Stand in Sri Hartamas where the bus does not stop. Ha ha ha
Or was it a Taxi stand? 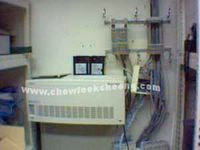 And I've just installed another system last night, finishing at 9PM. Will switch over from the old PBX tonight......

You know, using my Ericsson's T630 camera in quiet mode, I took a picture of a very sexy Receptionist but its not nice to upload here. Heh