You know, sometimes when you have itchy hands, you sort of make trouble for yourself. So, here I was, in a shop which I was not supposed to go and I just saw these 4 HotWheel toys which were quite different from the normal ones. So, They told me, I can have it for RM10 for three cars and the fourth one is RM4. I said fine. 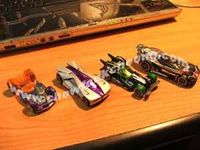 While I was paying for the cars, we struck up some small conversation which lead to the HotWheels 1989 Batmobile (designed by Anton Furst). When he told me the price, my eyeballs nearly popped out and hit the wall. They were selling it for RM150, where all places "outside" were selling them for RM299 or so. Yeah, I bought it, guilty as sin. 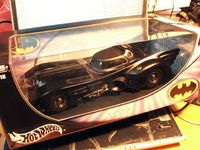 After 2 days in the Hospital, it was well worth it. However, seeing how my wife, Esther, suffered (and how bruised was my arm when she grabbed & clawed it), I might agree with her that one is enough.

But being there to witness the actual event, I was so proud and happy and sad and hopeless and nervous (and every other emotions) at the same time.

It all started on Thursday morning (0400) when she told me that her contractions are getting more and more regular. So, we got into the car and went straight to the Hospital. Everything was prepared and therefore, thre was no rushing or panicking. Throughout the day, her contractions were still consistent at 5 minutes while her cervix was still at 10% dilated.

By night, there was no change and therefore, the Doctor would give her some drip/medication in the next morning to help speed up the process. Then her contractions became more and more frequent, which I think is about 3 minutes apart. However, at 1300, the pain was getting more intense so we allowed for epidural. (Little did I know that epidural was though her spine and not the IV as I thought) By 2030, her cervix was at 50%, which I thought was good progress.

Unfortunately, its was getting more and more painful for her and at 80% it was not enough for safe delivery. So, the Nurse (Norhayati) helped her to achieve 95%. I offered my arm for her to grab, which resulted in scratches and bruising, to my total suprise, it did not bleed. By 2130, the Doctor has arrived and the process begins.

It was a bit gory and despite everyone's belief (and to mine) I did not faint on the spot. But let me tell you this, red liquid and vacuum suckers definite do not mix. The Doctor pulled the baby (via vacuum sucker thingy instead of forceps) out by timing with the contraction. She pushed and pushed while I encouraged her. It was quite fast and was over in less than one and a helf minutes. I keep thinking about the blood loss which the Doctor told me, is at the rate of one litre per minute.

Since the baby's head was soft, where the vacuum sucker thingy was attached to her head, it formed into a big lump as if the baby had a bee-hive hair-do. I was quite excited and kept taking photos until the Nurse wheeled her into the Nursery.

Anyway, the baby is quite alert and has quite a temper (like me). And by this morning, I spoilt her by holding her too long. Now she wants people to hold her to sleep. Esther also recovered very quickly this morning while I am still tired. Happy but tired.

Deep in my Heart, I am lucky it was not a boy because I do not know how to smoke a cigar. Heh

[There she is, all cleaned up and looking fresh]

[She loves to sleep a lot]

[My Parents or should I say, Kristene's Grandparents]