A trip to Seremban (or getting lost in Nilai)

We had an emergency call to go down to one of our customers in Seremban. It was really an emergency (to them) because the problem started in April and they got the report only this morning. By the time they got things in motion, so did my bowels, unfortunately. I ended up taking their calls while making chocolates.

You see, their PBX got struck by lightning many times and the last time, they stupidly sent it back to my previous company which I guessed, did a so-so job. So, after some repairs, it got struck by lightning again. It can't be helped because from the Manager's description, the lightning struck at a lampost outside their premises. I suspect that the Terrokom cables were near the lampost which, in Murphy's Law, hit the phone system. Even the Guard House and their Network systems were not spared. And their being on a hill did not help either.

When I got there, the place was in a mess because some bright spark bypassed the phone system and connected to the Terrorkom cables directly. Luckily, no one tripped over the cables which was lying all over the floor. Still, by the time I got everything up and running again (with lots of mixed Nescafe and Milo drinks from their mini-bar) it was almost four in the afternoon.

So, being a good driver with perfect sense of direction, I accidentally took a wrong turn and ended up using the trunk roads towards Nilai/KL. But at least I saved RM2.00 on Tolls and learnt not to turn left so hastily. Ha ha ha ha! 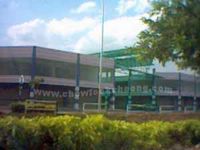 There were some new shops right after the Nilai Town Council 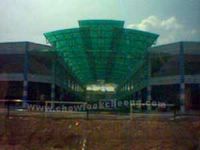 Very nice canopy in the middle